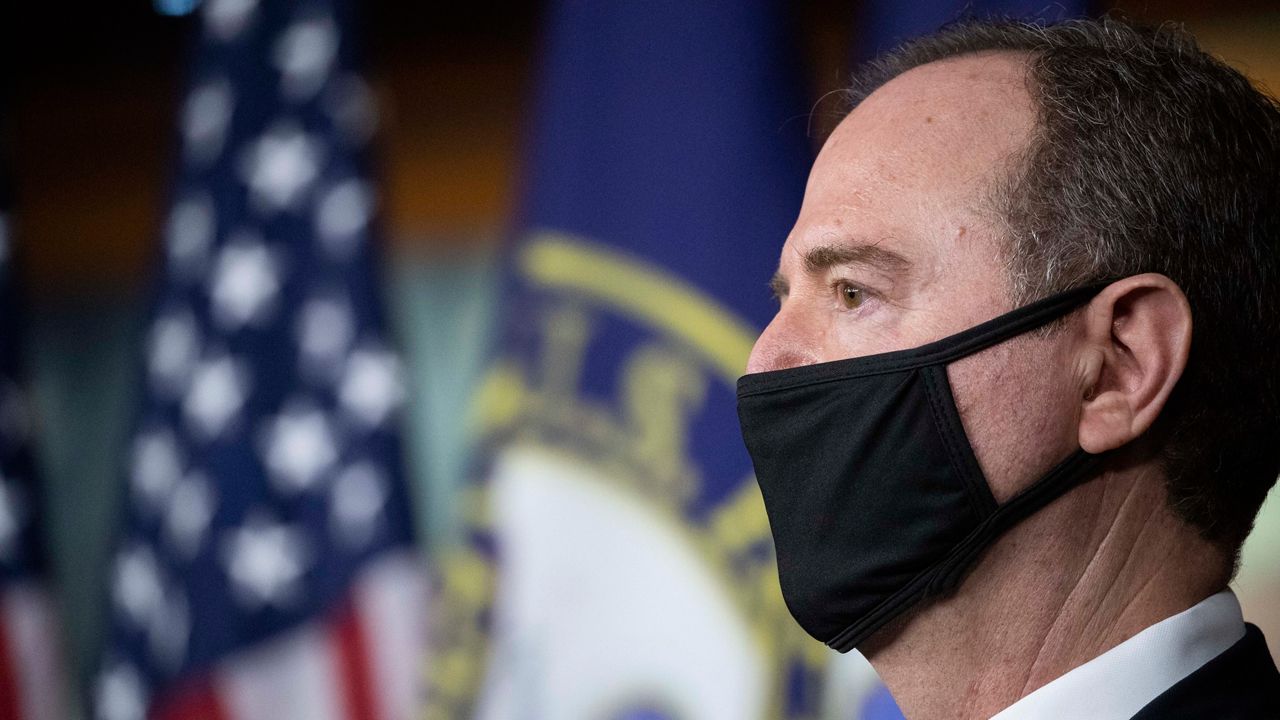 Rep. Adam Schiff, D-Calif., Chairman of the House Intelligence Committee, stands during a news conference on Capitol Hill, after a meeting at the White House, Tuesday, June 30, 2020 in Washington. (AP Photo/Alex Brandon)

Rep. Adam Schiff: Mixed Messages From Leaders During a Pandemic Are “Deadly”

While Southwest Airlines has promised not to fill the middle seats on its planes until Sep. 30, United Airlines and American Airlines are both booking full flights. Health experts have made it clear that physical distancing is paramount to stopping the spread of the novel coronavirus.

For people like Rep. Adam Schiff, who represents California’s 28th District, flying from Los Angeles to Washington is a big part of his job. He said he “doesn’t mind shaming” the airlines who have stopped physical distancing in the middle of a global pandemic.

“On some of my flights, I have people sitting to my left and to my right. They’re just about a foot and a half away, if even that,” he said. “I take greater protections when I'm in an environment like that on the plane where people are not socially distanced.”

While masks are required on board a plane, people refuse to wear face coverings in other public spaces.

“The enforcement is really problematic. One of the other issues is that we've had very mixed messages from some of the senior leadership in the country, and we continue to get mixed messages,” Schiff said. “The president has recently, at least ostensibly, gotten on board and now is advocating masks. But for a long time, he was not only dismissing the importance of wearing masks, he was disdainful of those who did.”

We are United in our effort to defeat the Invisible China Virus, and many people say that it is Patriotic to wear a face mask when you can’t socially distance. There is nobody more Patriotic than me, your favorite President! pic.twitter.com/iQOd1whktN

“This week in Congress, I get into the elevator in the Capitol with one of my Republican colleagues who is a part of the GOP leadership, and he refuses to wear a mask,” Schiff said. “And for some, they would like nothing better than to make an issue, to be the subject of an enforcement action to force them to do the right thing. I don't know what message they're conveying by their refusal to wear masks except that they don’t care for science, and they don’t care about the health of the people they’re around.”

The mixed messaging regarding masks has made it “very difficult for cities and states all over the country,” and that’s why people still refuse to wear masks, Schiff said.

“Health experts tell us if we would just [wear masks], we could really clamp down on this virus, we could save tens of thousands of lives, we could save billions or trillions of dollars,” Schiff said. “I introduced a bill over a month ago to provide a free mask to every American to be delivered by the postal service at their request, to do public service announcements on the efficacy of wearing masks, and do more research in terms of what masks are best. Measures like that are very cost-effective ways to shut down the virus. It didn't have to be this way where the United States is the leader in transmission and death.”

"It didn't have to be this way where the United States is the leader in transmission and death."

Tonight at 8, @RepAdamSchiff joins @alexcoheninla to discuss the importance masks, mixed messaging from leaders about COVID-19, and how to reopen schools. Tune in on @SpecNews1SoCal. pic.twitter.com/1vuiMBskOV

The United States had the potential to control the spread of the novel coronavirus. Instead, there’s been a massive outbreak that hasn’t slowed down.

“If you look before the pandemic, the United States had more resources than any other country to deal with a potential pandemic. We had I think some of the foremost health and epidemiologic experts in the world in the United States. We had the health infrastructure and capability,” Schiff said. “When measured against other nations, I think the United States was viewed as the No. 1 best prepared for a pandemic. And what's resulted in our having among the worst performances in the world is a failure of leadership at the top: A president who was unwilling to take it seriously early on in the pandemic, who said the virus would go away and it was no worse than the flu, and you didn't really need to wear a mask, and there's going to be a miracle cure, and just try hydroxychloroquine or whatever. Those things really matter, good leadership really matters, and the absence of it during a pandemic is really deadly.”

LAUSD recently announced it will not hold in-person classes this fall. Other schools across the nation might still open.

“My view is we ought to be guided by the science and the health of our students, and our teachers, and our school administrators,” Schiff said. “There would be nothing more painful for any family than to lose a child to this virus, and too many have. You know children are not immune from this. Some are having very serious consequences, and some are dying. Others are transmitting it to members of their family and others. And so I don't know that you can say one-size-fits-all because the country is experiencing this virus differently. There are a few states that are doing really well, and so in those states, they may be able to take a different approach than in those that are blinking red right now.”

Reopening schools also will depend on their testing and contact tracing capabilities.

“If you don't have any of those things in place, then I think it's very dangerous to reopen, you know certainly against the advice of health experts,” Schiff said.

The COVID-19 pandemic has taken an enormous toll on the nation’s economy. As of June, the national unemployment rate is 11.1 percent. In addition to providing every American with a one-time $1,200 stimulus check (although some people are still waiting for theirs), the CARES Act also allocated money toward unemployment benefits.

“When we were designing the first CARES package to provide these enhanced unemployment benefits to people, we recognized that a very substantial number of Americans — millions and millions of Americans — don't have the traditional employment that our parents' generation had. They’re independent contractors, they're freelancers, they work in the gig economy, they go from contract to contract,” Schiff said. “They were going to be completely left out of unemployment compensation.”

Many of Schiff’s constituents in L.A. work in the entertainment industry as independent contractors.

People with mixed income — money from both full-time employment and independent contracting — weren’t as lucky.

“For those people, many ended up getting less than they should have, some ended up getting none at all by a quirk in how the CARES Act was written. And initially we tried to determine, can the states fix this on their own or do we need new legislation? I think we’re going to need new legislation, so I’ve introduced the bill to try to fix this, to try to make sure no one is left out,” Schiff said. “It shouldn’t really matter what the source of your income is. It just should matter that you get an equitable amount of unemployment compensation to help you get through this.”