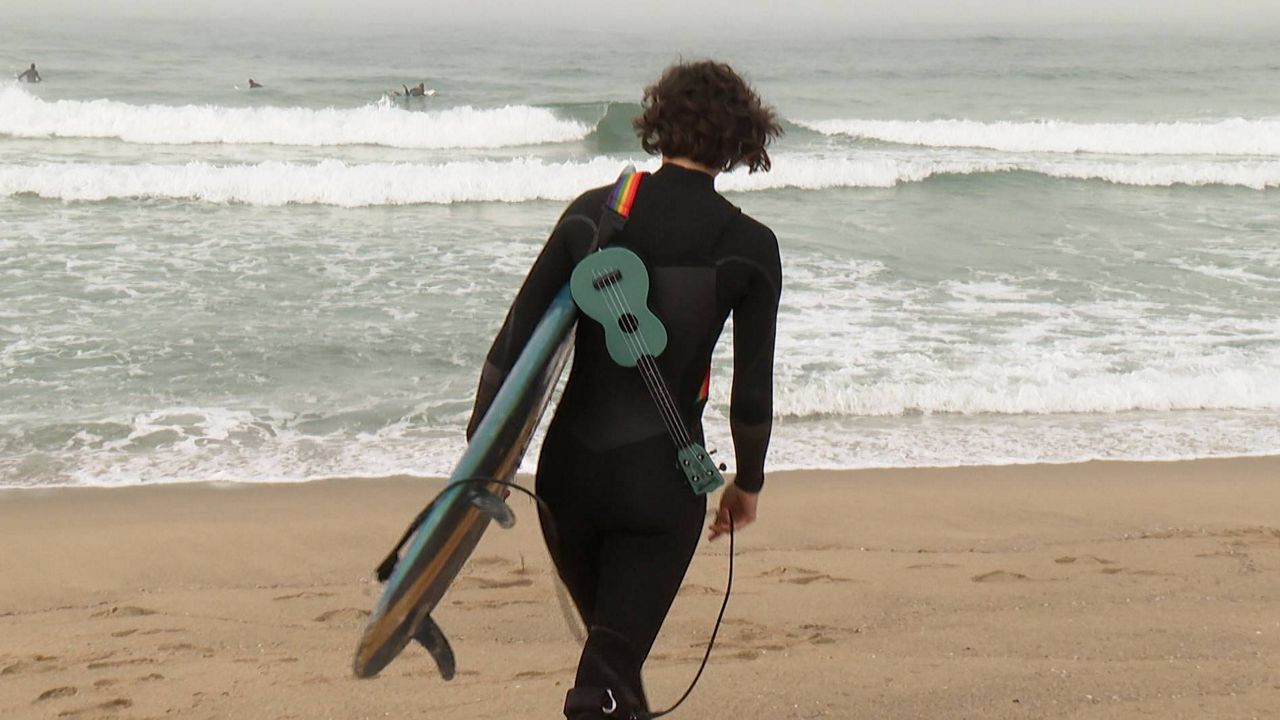 She is a surfer. She is a musician. Jupiter takes her ukulele surfing with her.

Surfer Serenades the Lineup With Her Ukulele

REDONDO BEACH, Calif. — It’s hard enough catching waves while surfing, but one surfer in Southern California is not only catching waves, she’s also serenading the lineup.

During a recent paddle out in Redondo Beach, the surfer who goes by Jupiter brought her surfboard, wetsuit, and one other important accessory — a ukulele.

After giving it a few strums and tuning it up, she headed into the water.

“I feel like music is that one thing that brings us all together,” said Jupiter.

It is a feeling of togetherness that Jupiter, who is also a musician, has been craving during this pandemic. Before COVID-19 hit, she would street perform, perform at bars, and was part of a band.

“Once the pandemic hit, I had to take it all and put it on pause,” she said.

The pause forced her to ponder other possibilities. As a result, she combined the two things she loves to do: surfing and making music.

Jupiter drilled a hole in her ukulele, added a rainbow-colored strap, and took the turquoise ukulele out with her surfboard.

“As I paddle out people are all just like, “Wait. Wait. Is that a ukulele? Like, how does it stay tuned? How do you bring that out in the water,’” she said.

She has been playing her ukulele while catching waves for more than eight months now. She started doing it in Santa Barbara where she lives, but often comes to Los Angeles and Orange County to get her strumming and surfing on. Jupiter said not only is it a fun thing for her to do while waiting between waves or sets, she said it is her way of changing the vibe in the lineup.

“Community is lacking in surfing, to a point. I feel like you could say hi to each other more, smile more, and give good mornings. Little encouragements like, ‘Yeah you got it. That’s your wave,’” she said.

She said playing her music in the water is way to start a conversation, and yes, Jupiter takes requests.

For Jupiter, surfing while playing her ukulele is her way of having a party with live music.

“This is a universal party wave here, and everyone’s invited,” she said.

Invited to jam, sing, surf, and put out positive vibes in the water.