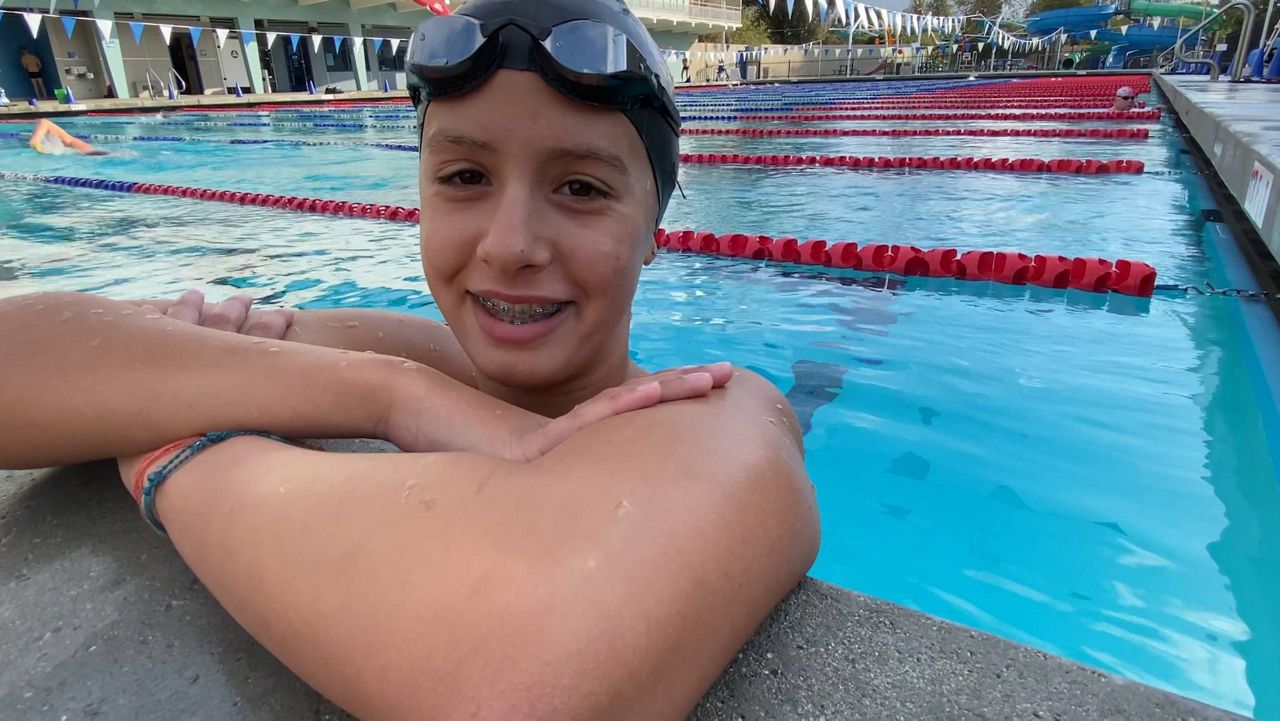 NoHo Teen Dives Into Fight Against Hunger With Marathon Swim

BURBANK, Calif. – Edie Markovich is a teenager, a college student, and an accomplished athlete. She is also diving headfirst into the fight against hunger.


“I was just a marathon swimmer who wanted to help out, and this is how I thought was best possible,” Markovich said.

The 15-year-old North Hollywood native has been swimming since she was only 6 months old and usually can be found in the open waters.

Never afraid to tackle a challenge, she has crossed the Santa Barbara Channel, and she has circumnavigated the island of Manhattan.

However, the pool at the Verdugo Aquatic Center in Burbank may be the site of her biggest achievement yet. It is there that Markovich will attempt to outswim hunger, going the extra mile – or in this case, 25 miles – to support local food banks.

“I’ve seen how many people need food now,” she said as she propped her elbows on the side of the pool. “It was just such a relevant thing, and I wanted to actually make a difference.”

On Saturday, Markovich will spend roughly 13 hours swimming back and forth, nonstop, in one lane, for a full 25 miles. The distance does not bother her. She has gone farther. What is daunting are the turns.

Markovich said she does not love pool swimming, especially chlorine. She prefers the cold temperatures and extreme depths of the ocean.

“That’s my place,” she said of the deep sea.

But open water swimming comes with other concerns.

“Sharks!” she stated immediately. “Like that’s the thing that you think about a lot when you’re in the ocean. But of course, when you are in the pool, there’s no risk of getting eaten alive.”

Markovich, who trains with L.A. Tri Club, a sponsor of the upcoming event, does not have a specific fundraising goal. She just wanted to make sure the donations benefit people in and around her community.

Monetary donations will go to the Los Angeles Regional Food Bank, or people can stop by the pool and drop off non-perishable foods for the Burbank Temporary Aid Center. For a small donation, people can also book a 45-minute window to swim with her.

Markovich has had quite a few achievements on land as well. After barely a year of high school, Cal State, Los Angeles, accepted her through the early entrance program to study philosophy. She said she does some of her best thinking in the water – alone in her own world, away from screens and voices, uninterrupted for hours.

“It’s like journaling,” she explained. “You know, when you’re swimming, you’re thinking about all the things in your life that you are grateful for and that you appreciate because you have so much time to think about things. It’s like meditation, but just super physically hard.”

And super worth it, if there’s a chance, it can help turn the tide for her neighbors in need.