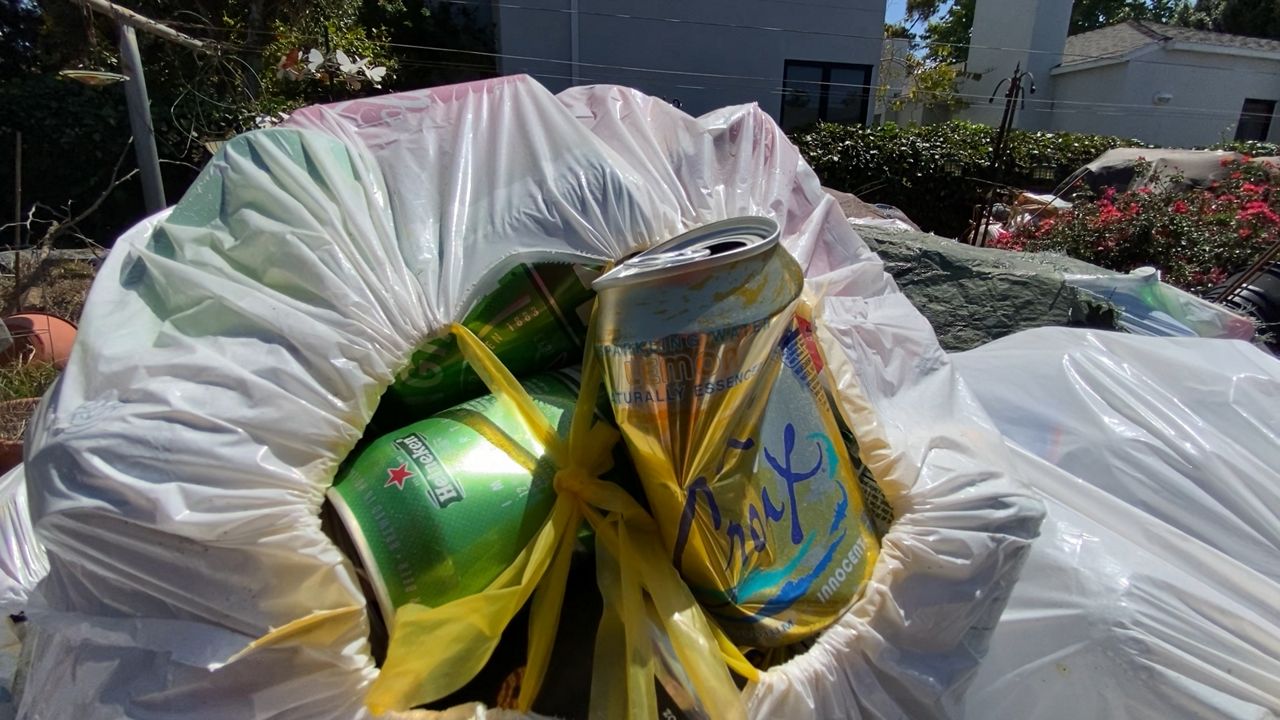 We pay CRV, but where can we get our money back?

LOS ANGELES — Dozens of bags filled with plastic, glass and aluminum beverage containers have been piling up in Nancy Hannickel’s backyard in West Los Angeles.

Hannickel is not happy about it and can’t find somewhere to get the full CRV refund that had been paid for them.

"Right now, you can’t take it anywhere," Hannickel said. "There are some places that you can take this stuff for scrap, but miles-wise, they’re too far out."

Throughout the last year, Hannickel hasn’t had any luck returning recyclables to stores nearby that are required to redeem the CRV value when other redemptions centers are not available in the area. She tried three locations, all of which turned her away.

There are currently 396 recycling centers in Los Angeles County; however, many only offer to pay by weight — an amount, Hannickel said, isn’t worth the gas to hand it over.

Consumer Watchdog’s Liza Tucker believes the cost of CRV is turning into a tax on consumers.

"Now that all those redemption centers are closing, many stores illegally turn consumers away, which is what’s been happening to Nancy," she said. "And enforcement is very poor by CalRecycle, and so you have a situation where you virtually don’t have a place to get back your nickels and dimes."

CalRecycle, the state’s department in charge of recycling and waste management programs, stated that recycling centers within the state are privately-owned and are having a hard time making a profit due to the increased use of plastics and declining scrap value on Aluminum. Non-compliant beverage retailers, according to CalRecycle, can be fined up to $1,000 after a first warning for turning customers away.

The department stated they had filed $3.6 million in fees against CVS Health Corp., as one example. In an effort to make recycling redemptions accessible, five pilot programs for mobile CRV redemptions have been created.


The nearest location for Hannickel is in Culver City. Tucker explained how more needs to be done to give people an opportunity to get their money back. She hopes that SB 38, a bill that puts the redemption responsibility on beverage companies, might be the answer.

"It hands the system over to the beverage industry and puts responsibility for the waste that’s generated for bottles and cans onto the makers of the bottles and cans, and it allows them to keep unredeemed deposits as long as it’s plowed back into creating an efficient system," said Tucker. "And so in models like this, we see much higher rates of consumer returns."

"California needs to stop just literally cheating, you know, the citizen or the consumer that’s bought this in the first place, whether it’s myself or my neighbor."

CalRecycle encourages consumers that have been turned away from in-store CRV redemption sites to file a complaint by calling 1-800-RECYCLE or by sending an email to complaints@calrecycle.ca.gov.