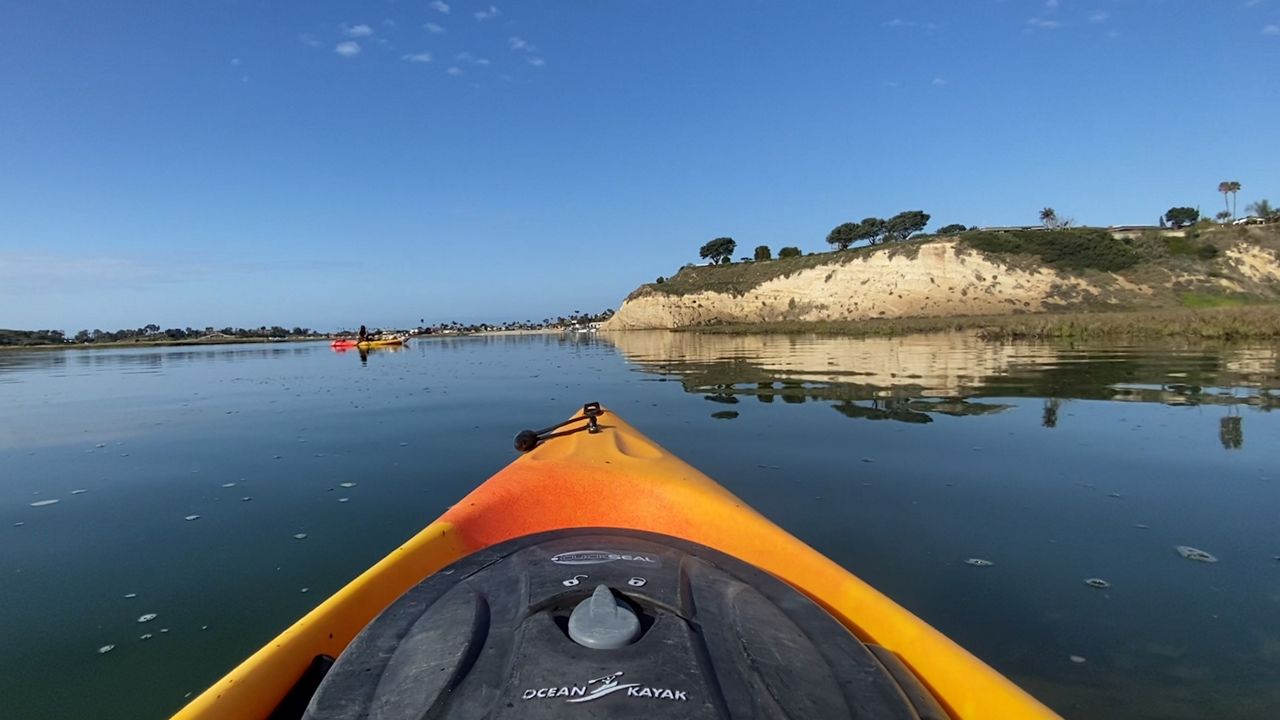 NEWPORT BEACH, Calif. — With rain comes trash. And in Newport Beach, the trash and debris that make its way from eastern cities pile up in the Back Bay.

During the pandemic, some groups that have helped keep the bay clean were forced to halt or slow down their work. As the state loosened COVID-related restrictions, a smaller number of volunteers have been working to chip away at an unintended environmental effect of the pandemic. And they do their work on kayaks during a high tide.

They pack up each kayak with reusable bags and push offshore at the Newport Beach Back Bay. Randall English enjoys kayaking. While he does a lot of kayaking for leisure, this time around, he was heading out on a mission to clean

In less than an hour into a recent three-hour cleanup, English said he had "found a lot of plastic bags, plastic bottle, loose pieces of Styrofoam."

English added that he also found a lot of something new that started showing up in the past year: face masks. Due to the pandemic, he explained, the Newport Bay Conservancy has been forced to host fewer cleanups and allow less people at each event. But the pandemic hasn't affected the pileup the volunteers were trying to tackle.

"Without these regular cleanups, the trash would just pile up and pile up. And the shore would be — literally be obliterated with trash," he said.

Trash in the Back Bay is an all too common sight, as English explained. Shrugging his shoulders, he said he feels "disappointment that people can't properly store their refuse."

Cesar Gallo was hiking in the area a few years ago and said he fell in love with it. So, he started volunteering to help keep it clean. He too joined the cleanup.

"It's almost like inevitable that you're going to see trash," Gallo said.

Gallo explained how there had been a lot to pick up in the last year-plus, which he says has been "a shock to see the increase of trash that has accumulated during this year of reduced activity."

And with less hands to help, the half dozen or so volunteers worked hard while the tide was high enough to get the kayaks around, as the high tide can also help some of the trash float above the plants.

In just two hours, English had collected a large pinkish-red bucket, some couch cushions, and much more. His kayak was packed with the trash that he barely had room for his legs inside the kayak.

"It's, unfortunately, easy pickings," he said.

Easy pickings but hard work for the dedicated volunteers. And even after they reach shore, their work is not done. They sort and pick through the trash for anything that can be recycled. Funds from recycling the items go to a food bank.

While English said it's satisfying knowing the group helped keep piles of trash from heading to the ocean, "it's more disappointing in our fellow humans."

English noted that it's not that hard to put trash where it belongs.

The Newport Bay Conservancy said that with the state reopening and COVID-related rules ditched, the nonprofit plans to have its largest cleanup event of the year. Last year's event was canceled.

The Coastal Cleanup Day at the bay will take place on Sept. 18, where at least 1,000 people are expected to help pick up trash.

CORRECTION: A previous version of this article stated that the Coastal Cleanup was taking place on Sept. 16. It has been changed to reflect the correct date of Sept. 18. (July 6, 2021)