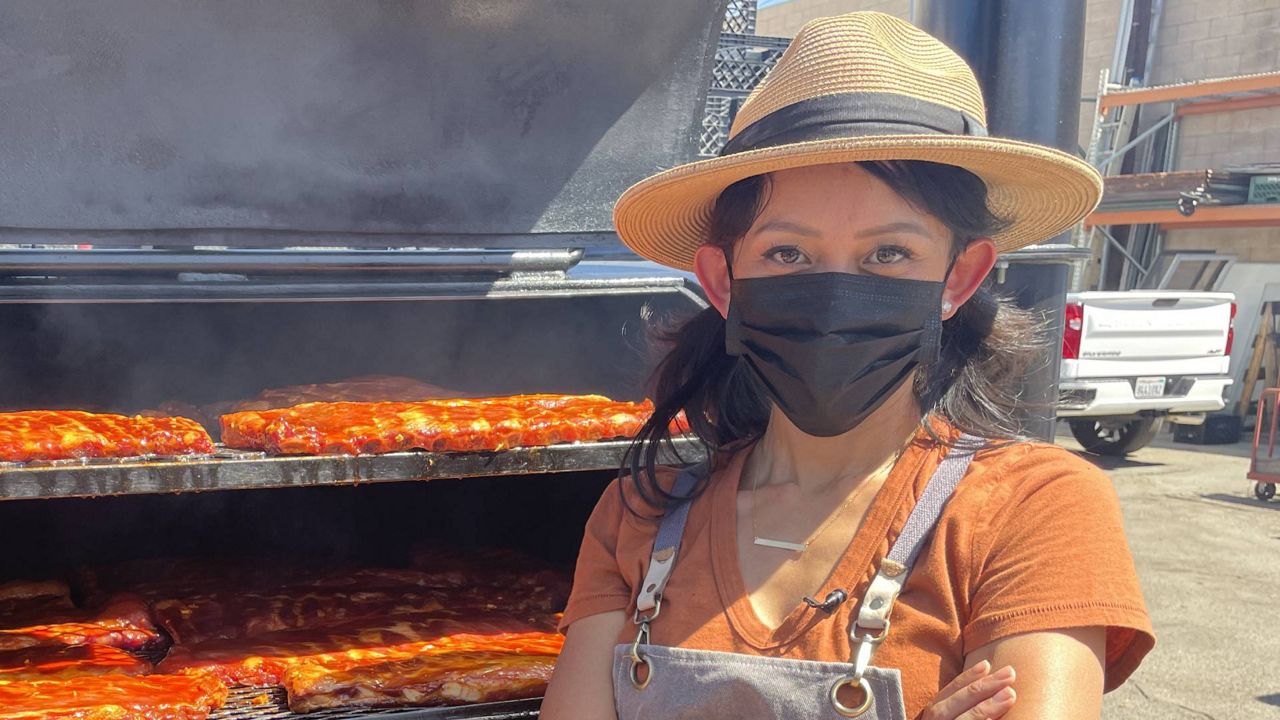 Women are leading the barbecue scene in Los Angeles

LOS ANGELES — In the food industry, the most stereotypically masculine role is that of the pit master.

But in Los Angeles, more women are leaning into that role and breaking the mold. Two female pit masters in particular are not only changing the stereotype, but also infusing their own culture and tradition into barbeque.

Winnie Yee is the pit master of a barbeque popup company called Smoke Queen. But at just 5-foot 2, she doesn’t fit the stereotype of a pit master.

“This sucker right here is probably twice the size of my newborn,” Yee said with a laugh, as she hauled a 22-pound cut of pork around the kitchen.

The mom of two is a self-taught pit master, learning by trial and error. She explained that being a woman in a male-dominated world has been an empowering experience and one that she wants to use to encourage other women to learn the art of being a pit master. Yee works with two other women in the kitchen, adding that building an all-female led team was important to her.

“As women, we can do anything men can do, maybe even better,” Yee said. “Smoking seven times your body weight is not easy, and we do this every weekend. So it definitely gives me that drive to keep going.”

Yee is also making a name for herself by infusing her Asian culture into her barbeque, creating flavors that are gaining her a loyal following. New York Times food writers have even added her name to their list of notable California barbeque.

Asian barbeque is usually cooked hot and fast, in contrast to American "low and slow," and Yee noted that the combination of these two elements opens up the world of barbeque to new flavor profiles.

Just 13 months after starting the company, Yee’s popularity has landed her a permanent space at Smorgasburg downtown.

LA is having a moment with barbeque, with so many varieties of popups and restaurants opening, that some food writers are even saying its barbeque scene could rival other, more famous barbeque cities.

But here in LA, it’s the women spearheading the movement. A simple Google search shows that over 30 barbeque pop-ups and restaurants in LA identify as being women-led companies.

Down in Carson, Shalamar Lane is keeping a longstanding family tradition of female pit masters alive in her restaurant My Father’s Barbeque.

"It’s like family history all in the rub itself, and the sauce, and the smoke," she said.


Lane explained that the restaurant is named My Father’s Barbeque because the family tradition started with her great grandfather but was passed down through the women in the family. Lane said she’s not at all fazed by being a woman in what is typically a male dominated field. She saw the strength in her aunts, who taught her everything she knows.

“They both had barbeque restaurants in a time that women just didn’t have restaurants,” Lane said. “What have (women) not been underestimated in? And we excel in everything. So I feel great about that. I like being underestimated. It's OK.”

Like Lane, Yee says being underestimated is something she used to experience often because she doesn’t look like your typical pit master.

“I’m very small compared to the size of this smoker, so when you look at this pit, you would think that someone really big and strong handles this pit. And I want to change that stereotype.”

That change is already happening. Both women say that LA is fully embracing this paradigm shift and offering up the unbridled support and enthusiasm for women to transform us into one of the most diverse barbeque cities in the country.