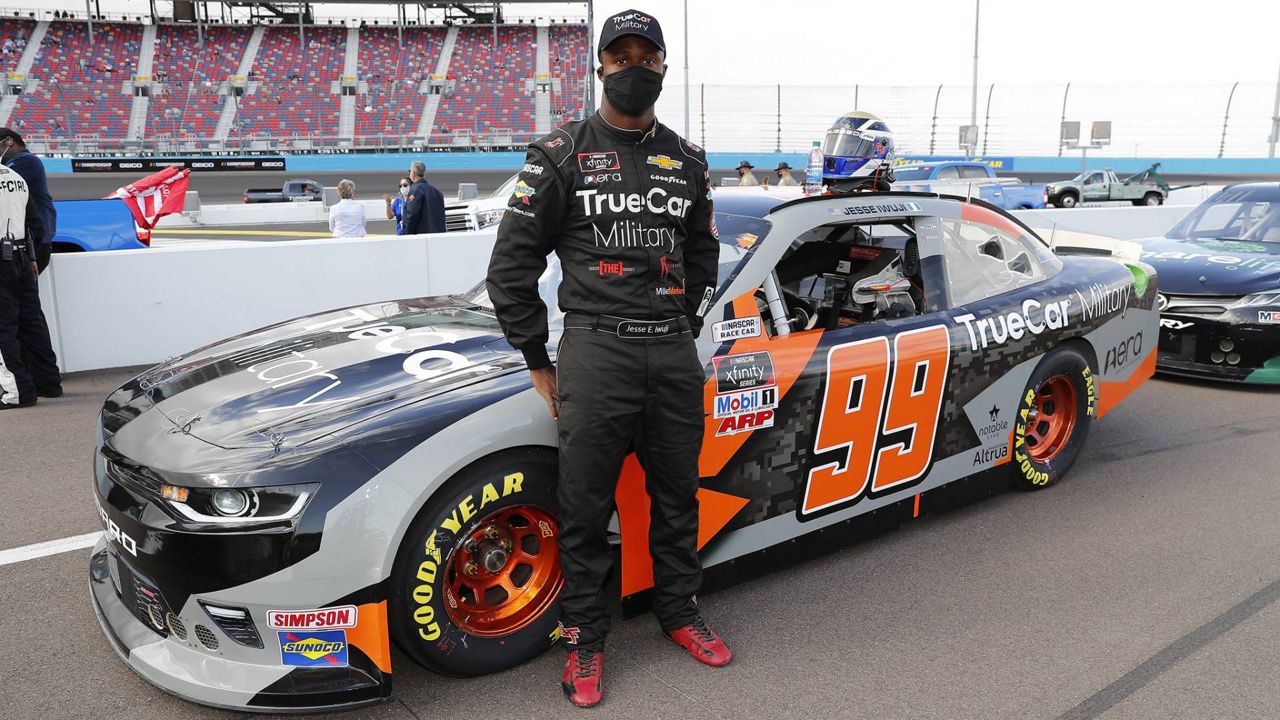 LOS ANGELES — NASCAR is not well known for its diversity, especially among African Americans.

There are only two African American drivers out of all four national NASCAR racing series — Bubba Wallace Jr. and Jesse Iwuji. Spectrum SportsNet’s Elle Young sat down with Iwuji to discuss his journey to NASCAR and his plans to open up motorsports to more minorities.


Iwuji competes in the NASCAR Xfinity Series, which is one level below the NASCAR Cup Series — where Wallace Jr. competes. Both drivers recognize the importance of their roles as the only two African Americans at the national level.

"For us to kind of have that torch and be paving the way for others behind us, it’s definitely an honor for sure, but it comes with responsibility," said Iwuji. "We are role models for those coming after us ... future youth to come up the ranks and eventually race in motorsports, whether it’s NASCAR or anything else."

One way Iwuji is attempting to open up the world of motorsports is by breaking down preconceived notions minorities may have about the sport of NASCAR. He wants to be the real-life example that minorities can compete in motorsports and be successful. Because of these efforts, Iwuji won NASCAR Diversity Awards in 2017 and 2018.

"What I wanted to do was just show people and inspire those in different communities that normally NASCAR isn’t in," Iwuji said. "I wanted to go out to the inner cities of major cities, places where people just don’t know anything about NASCAR because there is a stereotype, people feeling like maybe 'I can’t go to a NASCAR race because of my color'... when that barrier isn’t there. Everyone is welcome in motorsports. Everyone can be a part of it. Come watch, or come and compete.”

Despite Iwuji’s philosophy on the sport, NASCAR took criticism last year from fans for banning the Confederate flag. Iwuji explained that it doesn’t let it deter him when he experiences racism while competing.

"I don’t let that stuff bring me down," he said. "Like even if someone wants to be racist towards me, cool. We [Iwuji and his fans] are going to make you feel really uncomfortable to get it out of you eventually."

Iwuji added that he believes the biggest challenge to minorities entering motorsports isn’t stereotypes, but rather financial expenses.

“On the money side of it... NASCAR and any kind of racing, period, is different than your regular stick and ball sports. It isn’t integrated into the schools, so you can’t just go to high school and jump into a race car and play motorsports in high school. You have to do it outside of it. It costs money: fuel, tires, people, transporting the vehicle, entry fees, and race cars. I think that’s what holds back a lot of minorities,” Iwuji said.

However, Iwuji believes that e-sports is making it a lot easier for minorities to break into racing.

"When it comes to gaming and simulator racing, it’s a lot cheaper to do that and get you into racing, so you can feel what it’s like and experience it," Iwuji said. "Eventually, you’re like, 'I’m driven to go find that money, find the cash, get into racing, and be a part of the sport.'"

Unlike most NASCAR drivers, Iwuji's path to NASCAR did not begin at an early age. He was offered admission to the U.S. Naval Academy, where he played football in college for the Navy Midshipmen. After graduating in 2012, he entered the Navy and started a path to being a Naval Officer — when he realized something was missing.


Iwuji scrounged up the money to buy a car with the full intention to use it to drag race.

"I bought the car on a Monday, and I had it at the drag strip that Friday for the first time," he said. "Four days later, I was right in it."

Iwuji quickly moved up through the amateur levels to ARCA and then to the Truck Series, but going pro was not easy at first.

"I think I wrecked about six times in those first 11 races," he said. "A lot of people would probably just think I should probably quit. I didn’t let that seep into my mind. When I started this racing journey, the vision in my head [was] making it to the top level, making it to Cup eventually, racing on TV."

While Jesse is now racing in the NASCAR Xfinity Series, he hopes to advance to the Cup series. Until then, he remains a role model by taking his race car to schools to reach young racers of all backgrounds.

"My part in this whole thing, especially last year with all attention being super high, was I wanted to be that voice of reason," he said. "If we are going to be the America we are always meant to be, united we’ll rise, divided we’ll fall. Yes, I’m African American. Yes, you’re Mexican-American. Yes, you’re Asian-American, but at the end of the day, the one thing that keeps us all together is that American side, and that we are human. Just be good."