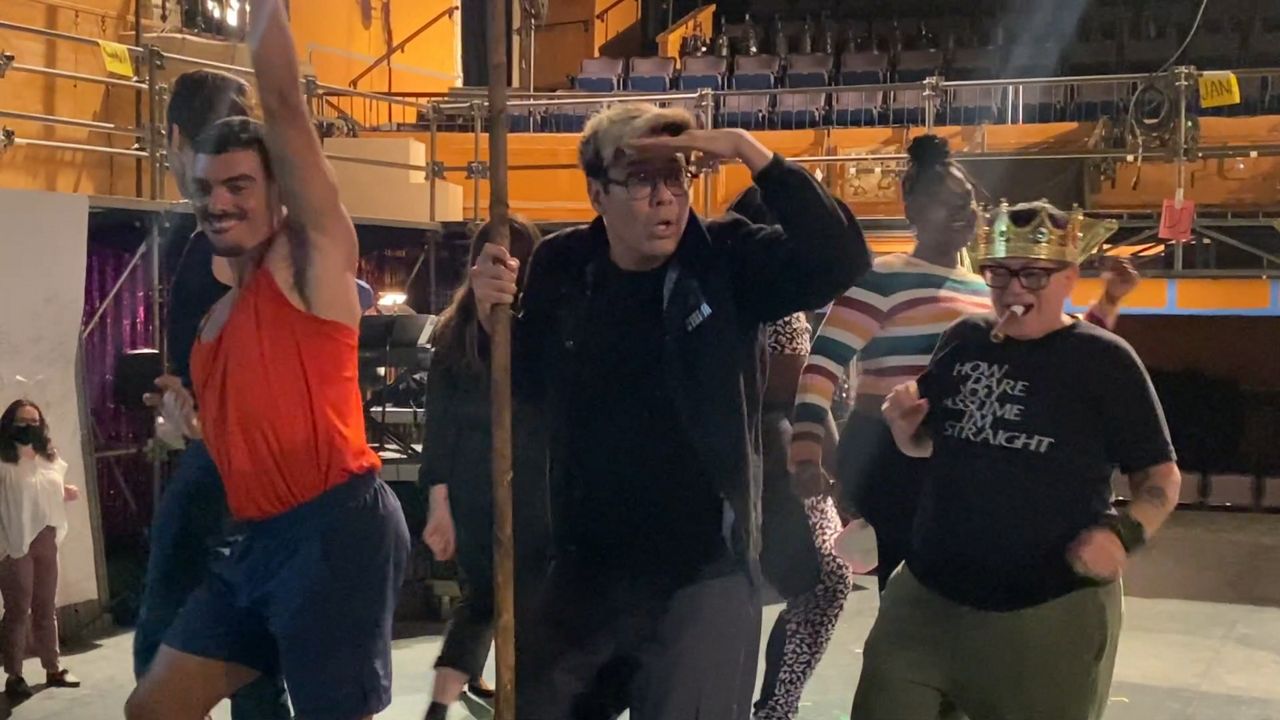 Pasadena Playhouse's 'Head Over Heels' is an exuberant welcome back party

PASADENA, Calif. — The beat is back at the Pasadena Playhouse where the theater is exploding with music, energy and color. The company isn’t just performing the musical “Head Over Heels” — they are rolling out a shimmery welcome mat.

“A big colorful interactive way to say thanks for leaving your house,” Sam Pinkleton said.

Pinkleton and Jenny Koons are the co-choreographers and co-directors of this reimagined production — the “Co-Co-Cos” as the cast calls them. Although it features the infectious music of the Go-Gos, the story is not about the iconic LA-based all-girl band. The plot is a celebration of gender identity, acceptance and love.

Originally scheduled for Nov. 2022, “Head Over Heels” just felt like the right way to bring life and light and audiences back into the space.

“Everybody’s had a hard year,” Pinkleton said, “and we really hope that this is a great time for people and a reminder that gathering in a space with other human beings…there’s nothing like it.”

“Let’s face it, humans are herd animals, we don’t like to like to be alone,” Basilius said. “That’s a fact.”

Wearing a crown and chomping on a fake cigar, DeLaria is clearly in her element. “You know, ‘Heaven is a Place on Earth’!” she beamed. “I have never been so happy to be in a play and on stage again.”

Although this is hardly your traditional stage. The theater has been physically turned topsy-turvy. What was normally the proscenium stage now holds rows of seating and a large set/dance floor was built right on top of the orchestra seats. Audiences choose if they want to sit on stage or in the balcony – or not at all.

“If you really want to be involved, you can be down on that dancefloor dancing,” DeLaria said. “I think that after the COVID of it all, I know I’m going to be grabbing audience members and dancing with them.”

The actress, who is one of the stars of "Orange is the New Black," has been breaking ground as an LGBTQ comedian and performer since the ‘80s and continues to do so. Even in this show about gender expression, she plays what was originally a male role.

“I never in my wildest dreams thought that I would see ‘Pose,’ ‘Orange is the New Black,’ ‘The Prom’ that was on Broadway,” DeLaria said. “It furthers not just the queer community, but it speaks to any of the disenfranchised people that are out there. It’s like I’ve died and gone to lesbian feminist heaven.”

DeLaria says she plays her king in drag. Her queen, Gynecia, is played by Alaska 5000, who won the second season of “RuPaul's Drag Race All-Stars.”

“I think ‘Head Over Heels’ as a musical was on the forefront of ‘let’s think about gender in a different way,’” she said. “‘Let’s think about casting in a really unique and progressive and diverse way.’ And so this production is, like, taking that and 2021-ing it even further.”

And that includes off stage as well. George Salazar, who starred in the Playhouse’s production of “Little Shop of Horrors,” has been very vocal on social media over the past 20 months, calling for more BIPOC representation in all levels of theater-making.

“I really don’t want to see all-white creative teams and casts for things, even if it’s just a short video for the internet,” he tweeted in April. “Why are you all slipping back into old habits like the past year didn’t happen?”

At his very first meeting for “Head Over Heels,” he made a point of asking the creative team about the designers involved in the project. “Because on stage we can cast a beautiful rainbow of people of all backgrounds and all experiences, but what are we doing behind the scenes,” he explained.

He’s not only satisfied with the level of representation among this cast and crew, but he’s also thrilled by it. “We’ve woven a fabric here that is the quilt of my dreams,” Salazar said. “This is the type of theater that the rest of the world should be making. I think we are honoring all the things that I was screaming about on social media.”

For Jenny Koons, she hopes the world they’ve created on stage is reflected in the crowd. “Head Over Heels” is a welcome for all.

“And that means long-time Pasadena subscribers and 18-years-old who have never set foot in a theater,” she explained, “and can we imagine that world as the world we are moving into as we all start to reopen our institutions.

“We think of ourselves like this,” Pinkleton said, one eye peeking through a very narrow space between his tensely held hands, “and the show asks for people to think of themselves and the people around them and the room around them in a much bigger way. And that is, I think, a wish that we have for the show, and a wish that I think we have for the world.”

The show is “A Vision of Nowness,” as the Go-Go’s sang, or at least what they believe now can be.

“Head Over Heels” begins previews on Nov. 9 and runs through Dec. 12.