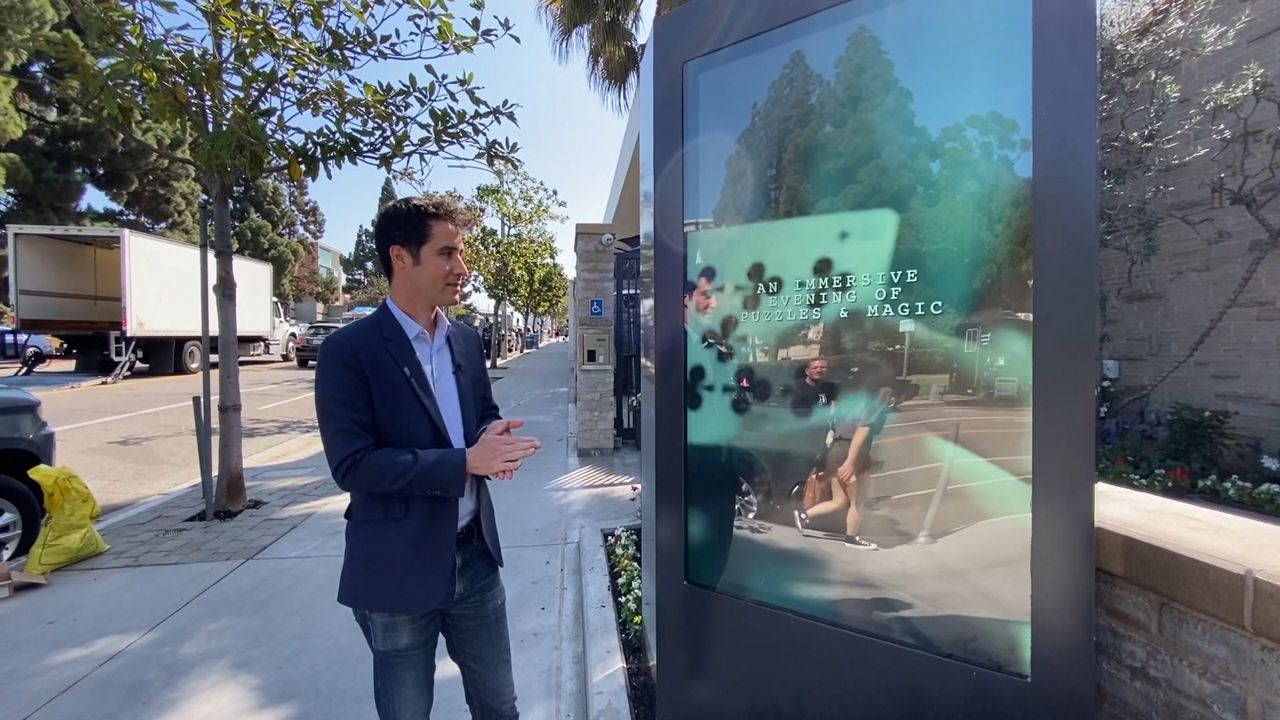 Geffen Playhouse reopens, kicks off 25th season with 'The Enigmatist'

LOS ANGELES — “I’m going to unveil this,” Gil Cates, Jr. said as he opened a box to reveal what looks like a large silver spring engraved with ones and zeros.

It’s not an award anyone at the Geffen Playhouse expected to receive. "The Present," which was presented online in 2020, received the People’s Voice Webby Award for Best Narrative Experience in the virtual and remote category. It was the first of what turned out to be seven shows offered by the Geffen Stayhouse, a pandemic-era virtual program that Cates says helped keep audiences and staff engaged while the theatre was closed.


“So that was a nice treat to be, you know, recognized and really to have everybody here recognized for all the work that went on,” Cates said.

Coiled awards aside, Cates is ready for the theater to bounce back for what will be its 25th season. Actually, 2020 would have been No. 25, but the theater had to hold the curtain for 18 months. Walking through the office area upstairs, Cates pointed out historical photos showing when the building was a Contempo furniture store.

“A theatre was built, and then you could come buy furniture in intermission,” he said with a laugh.

One flight up, the hallway to the dressing rooms offers another history lesson featuring signatures from every cast of every show to ever grace the Geffen stage.

“It's really kind of a memory lane,” Cates said as he pointed out some of the names that grace the wall: Joan Rivers, Andy Garcia, Carrie Fisher.

The Stayhouse shows are being added, and David Kwong’s name will soon magically appear. Having worked backstage at the Geffen when he moved to Los Angles 15 years ago, Kwong was gearing up to come full circle and make his Playhouse debut in "The Enigmatist" in 2020. Instead, he is reopening the theater in 2021 with his unique one-man, interactive show that melds his two loves: puzzles and magic.

“I'm kicking the door open,” he said. “I've taken the world's nerdiest hobbies and combined them into one career."

The theater, housed in a nearly 100-year-old building, is ready for audiences. Its HVAC system has been upgraded with new doorways to increase air flow. The Geffen was also one of the first theaters to announce that vaccinations would be required, weeks before county rules were put in place.

The staff wants audiences to be physically safe coming back, but are they mentally ready? Kwong thinks they are.

“If I learned anything from 'Inside the Box,' it's that people want to be engaged and they want to have fun, even if they're doing it from their laptops. So I think it's going to be 10 times that when we get back to live theater.”

“People were isolated but yearning for connection,” he said. “Now that we can be in the theater, I think people are keen for that experience.”

Shakman added that the Geffen Stayhouse was “part of a moment, a very unusual moment.” Even though they don’t plan to continue that specific initiative, he says they aren’t turning away from their newfound digital audience.

“In the future, we are looking for ways to use our digital experience with our live theatrical productions in certain unexpected ways,” he said. “So I'm excited about that. I'm excited about building new audiences and continuing to serve the ones that we already have.”

Shakman sees the Geffen as a vital part of the community, an institution that he hoped was welcoming to all. But like much of America, he says, the past year and half gave them time to reflect.

“We took stock of where we had failed in terms of our goals, and to realize that we might have been leaving some communities out of that was heartbreaking.”


Going forward, inclusivity is a priority “in terms of the work that we're putting on the stage as well as the audiences that we're bringing in to see it,” Shakman explained. “This is a theater for all of Los Angeles, and Los Angeles is one of those most amazing, exciting cities, full of wonderful diverse stories to be told and diverse storytellers to tell them.”

Kwong, who is a New York Times crossword puzzle creator, believes people are at their most innovative when they have to work within the parameters of a situation.

“And that's very much what's going on here in the world now,” he said. “We are figuring out ways to move forward.”

Cates says his father — Gil Cates, Sr., who founded the theatre 25 seasons ago — would have loved to see this moment. His motto, “Onward and upward with the arts” hangs on the lobby wall, both in his memory and as a reminder.

“He was always forward thinking. He’ s always looking ahead,” Cates said. “It was never about being complacent. And I think that's where I think he would really appreciate what we did.”

"The Enigmatist" is playing in the Audrey Skirball Kenis Theater. Performances have been extended through Nov. 14.