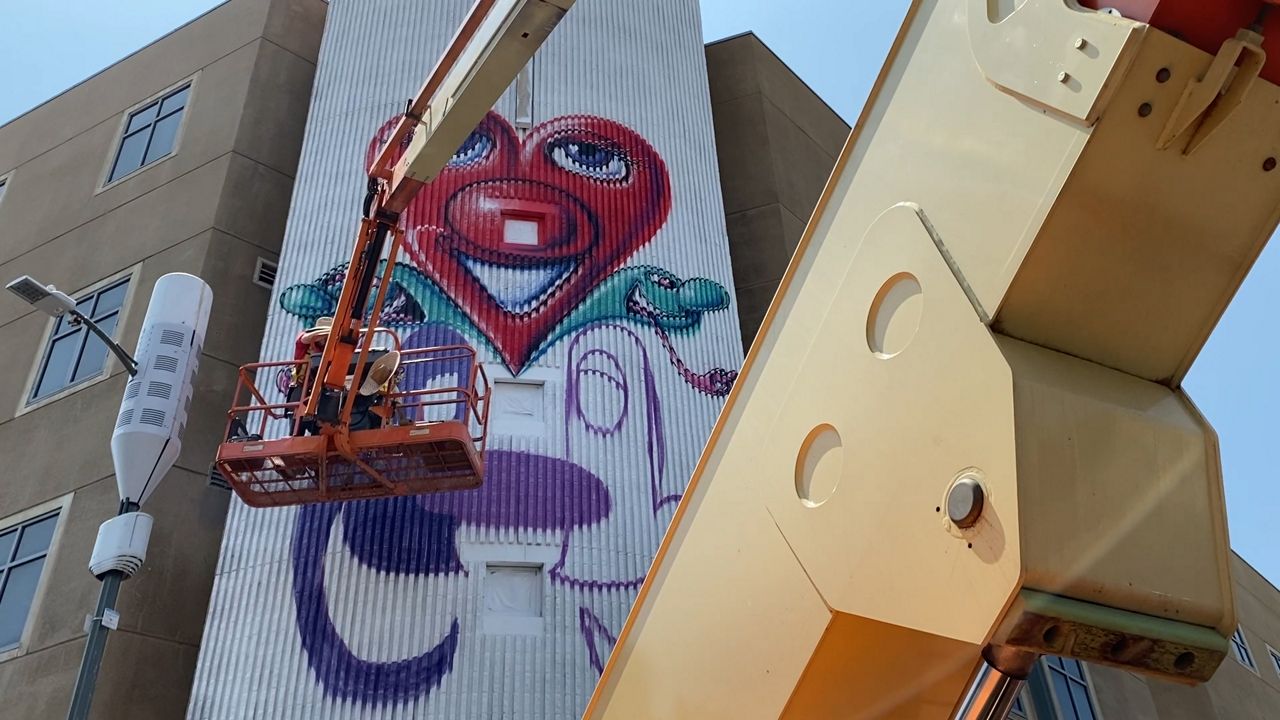 A new piece of art now reflects that.


High above the street, on a block lined with makeshift tents, a new mural pulses with energy and color. Its whimsical design has sprung from the heart and mind and hand of Kenny Scharf, a pioneer street artist who has been leaving his unique mark on walls for decades. All of his murals matter to him — but this one is different.

“This institution seemed to me even more important than any old public wall,” he said. “This one is special because people here, they need a lot of help.”

The painting graces the rounded corner of the LA Mission. They aren’t rebuilding the Mission, he tells one older woman who recently approached to ask about the machinery. They’re just “trying to make things a little nicer,” Scharf tells her.

Scharf, who developed his signature style alongside Keith Haring and Jean-Michel Basquiat in the 1980s, spent four days up on a lift, working in the sun to turn a white ridged wall into a colorful canvas. At its core is a giant heart with kind eyes, smiling over the neighborhood.

“We all have to have a heart,” Scharf said. “And, you know, I’m not solving any problems, but I’m just hoping to shed some light on all the plight of these people and maybe improve their lives a little bit, if there’s anyway I can do that.”

This is the Valley native’s way of giving back. Scharf donated his time and talent to the project, and he took it on because Eli Graham — a long-time fan and chair of the LA Mission Arts Council — just asked him.

“And he said 'yes' pretty much the second I asked,” Graham said, seemingly still shocked that the project came to fruition. “Kenny is somebody I look up to and respect and, you know, couldn’t ask for anything bigger than this.”

With the mural reaching 66 feet in height, Graham may mean big in size but, no doubt, also means big in purpose. He says the goal of the piece is to make the LA Mission a landmark and beacon that attracts people from all over the city and maybe inspires them to land a hand.

“We have the services and resources to change lives and impact people and get them into housing,” he said. “We need volunteers to power that engine and make it happen.”

It is already happening. Skid Row is not normally on anyone’s travel itinerary, but a couple of tourists from New York City made a special trip to the mission to see Scharf’s creation. Many in the neighborhood stopped and thanked him. A shopkeeper across the street said he’s seen a lot more smiles on the street since the project started. And an artist who has been in and out of homeless came by to show Scharf his work and has since sold pieces on Instagram.


For Scharf, this project is also about opening eyes — not to what’s on the wall, but to the inequities that surround it.

“Here we are in Skid Row, and literally I could probably walk a few blocks and have a very nice meal in a fancy place,” he said.

Scharf hopes people who come to see the new larger-than-life painting will look around, as well as up, and realize there’s work to be done on the ground.

“Get the people that don’t want to come here or don’t care to come and make them care,” he said to Graham.

The wall was tricky due to three dimensional ridges that required triple the amount of coverage. It was more work than Scharf expected, but that didn’t deter him from his mission.

"I’m just giving myself my own kind of optimism and hope," he said. "And hopefully it can inspire. It can uplift. That’s that I want.”

The mural can be found the corner of Winston and Wall Streets. For information on the LA Mission and how to support their work, visit here.