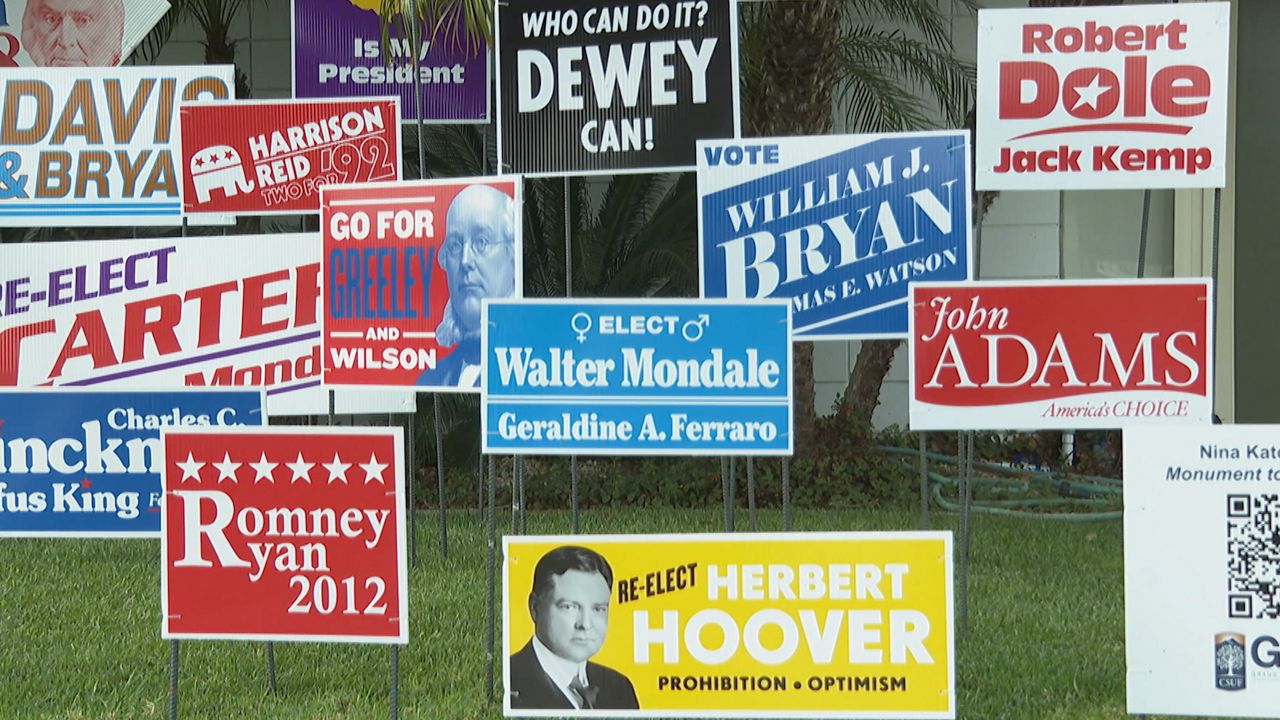 ORANGE, Calif. — Every election season, signs promoting politicians pop up on lawns across the U.S.

Typically, just one politician is advertised per lawn. Homeowner John Webb, however, is hosting 58 election signs — all from losing presidential candidates.

“I have two favorites,” said Webb. “The first one is Tom Jefferson because I like the way they try to humanize somebody with that stature — and also the fact that there’s only been one president, and already America needs a change.”

From John Adams to Hillary Clinton, the signs are a temporary art installation called "Monument to the Unelected," and it’s already drawing a crowd.

Created by artist Nina Katchadourian, the installation is presented by the Grand Central Art Center, and it’s meant to remind viewers of what America might have been without endorsing any specific party.

“I think the reason that people stop [is] mostly because they just think there’s some wacky guy with a bunch of political signs,” said Webb. “It takes them a while to see there’s not really not a political statement about today being made here.”

They’re not real election signs, but the designs are certainly inspired by them.

Printed on corrugated plastic and commercially manufactured like real ones, the signs make viewers wonder what would’ve happened if Aaron Burr had won.

Though the installation only displays losers, Webb believes there’s still a lot to learn from them.

“I’m currently reading A People’s History of the United States, and it’s a very interesting reinterpretation of American history mostly as viewed from the side of the losers,” said Webb. “It’s a tough read, but it’s certainly different than the history that I learned going to high school here in Orange County.”

Locals agree the art installation is the perfect way to drive conversation. Tracy Ettinger, for example, happened to see it while walking her dog.

“My favorite sign is Adams,” said Ettinger. “I love the historical quality to it. They probably didn’t have yard signs back then, and it’s fun to see what that might’ve looked like.”

John Spiak is the director and chief curator of the Grand Central Art Center. For him, the installation is meant to remind us where we came from.

“It’s a history lesson,” he said. “They can come and see all the people that, you know, amazing people that ran for president and didn’t win, but it doesn’t make them any less significant.”

Come Election Day, a 59th sign will be added to Webb's lawn, and he’s looking forward to it.

“I’m sure everybody has their own favorite, but there will be a party after the election,” he said.

Come for the art and get a history lesson.