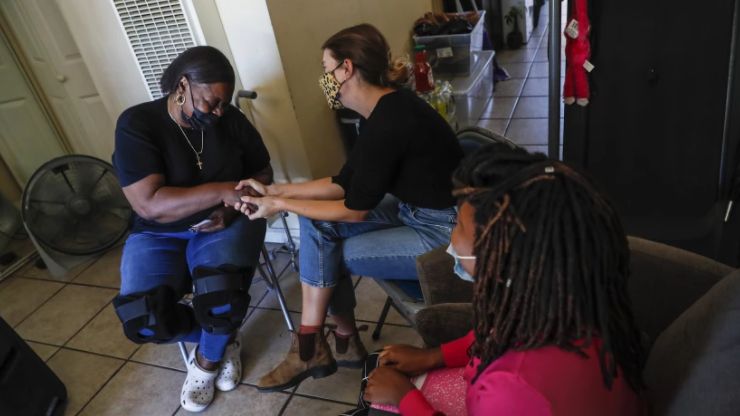 A computer model can predict who will become homeless in LA

As rents increase across the Southland, so does housing insecurity for those living paycheck to paycheck. One financial setback can quickly send someone from their living room to a freeway underpass. LA Times public health reporter Emily Alpert Reyes joined “LA Times Today” host Lisa McRee to explain how the innovative county program is predicting who is at risk of becoming homeless.

“This is a project that is the California Policy Lab at UCLA working together with the LA County Department of Health Services. And what they’re doing is trying to use data to figure out who are the most important folks to help. The people who are at the most risk of falling into homelessness if they don’t get any assistance... So, [the program is] using data to figure out who are really the most at risk in the county can use their resources in the most efficient, targeted way to really go after the folks who are most likely to end up homeless if they don’t get any help,” Alpert Reyes said.

Alpert Reyes talked about the data points the program uses to assess needs.

“It’s a pretty complex algorithm. The model now being used in LA County incorporates about 500 features, and it’s pulling data from eight different county agencies to try to help determine who they should try to help,” she said.

Experts believe it is financially much more efficient to keep people in their homes than to see them slip into homelessness and then try to get them back into a living situation. Alpert Reyes broke down how many people this program has assisted.

“Dozens of people have gone through the program so far. They’ve done some initial analysis, and out of the first 54 people in the program, they estimate that those folks would have had a 33% risk of becoming homeless in the first place if nothing else happened. And so far, about 90% of participants have retained their housing while in the program. So, the signs are good. They’re hoping to do a broader analysis that would compare the groups of folks who went through the program versus similar people who didn’t,” she said.

While in the program, participants get up to $6,000. That money is supported by Measure H and the Conrad Hilton Foundation. The American Rescue Plan provided additional funding.