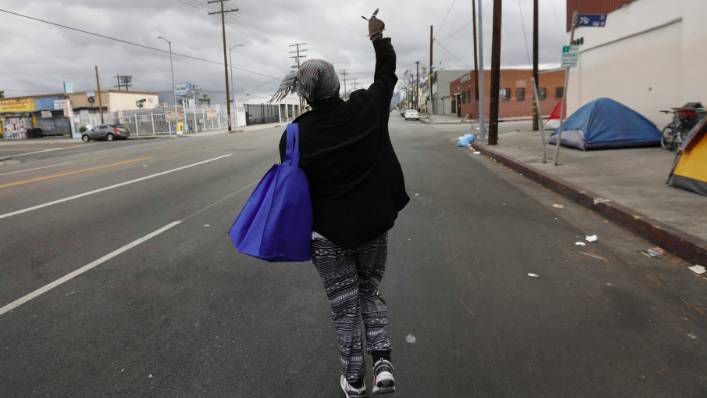 The goal for projects like Encampment to Home is to one day clear the streets of homeless individuals.

"The Street Within" Series Explores the Homeless Crisis in LA

LOS ANGELES — There are more than 66,000 people living on the streets of Los Angeles.

Homelessness is one of the critical issues facing the Southland that is being exacerbated by the hit to the economy caused by the coronavirus.


In order to get to know those who call the streets home, LA Times writer Thomas Curwen and photographer Francine Orr, spent a year with the residents of Broadway Place and 39th Street – including one woman who goes by the name of “Big Momma.”

Curwen and LA Times’ photographer Francine Orr found out about the encampment in January of 2018. At the time there were 10 to a dozen people living there.

For this story, they focused on seven people who were living there. The encampment is just south of downtown Los Angeles.

There are many reasons why people experiencing homelessness may live in encampments. However, there are projects like Encampment to Home, which was put together by city and county agencies under the direction of the United Way.

“Last year, as money was coming into the city from Measure H, they decided that they needed to find a way to expedite services and get people off the streets and into apartments. They brought together a lot of different agencies in the city that had been working individually and sometimes across purposes. They brought them all together to focus on an encampment in the Broadway Place neighborhood and another one in Leimert Park,” said Curwen.

The goal was to move individuals in the encampments into apartments in order to determine the efficiency of the process – the goal to one day clear the streets of homeless individuals.

The people living in the encampment are like neighbors. They all have their own unique personalities and look out for one another.

“Big Momma” had a deep faith. She would go to church twice a week from her tent. She had extreme highs and lows sometimes within minutes of each other. But, she was very welcoming,” said Orr. “Top Shelf” was great, she had her nails done. She’s very clean and very organized,” added Orr.

While the people living in the encampment continually look out for each other, they also face great dangers. Rape can happen. Cars can run up to tents. Drive-by shootings can happen, and knife fights can happen.

One thing many others may not know is how challenging it actually is to get people off the street.

“The paperwork alone, I counted at least 100 sheets of paper so that each of these individuals had to sign, [and] read. They had to be vetted by law enforcement. All these steps were required for them to get housing subsidies,” said Curwen.

Curwen adds that this story ended up being about more than just homelessness. It turned out to be a story about the health crises that lie behind homelessness.

“Not only are we seeing people living without housing, but we’re seeing people who are challenged by a number of mental illnesses, by addictions, and habits that have kept them safe while living on the street, but don’t work so well when you move into housing,” said Curwen.

Some of the homeless people that were moved into the apartments were not able to live with the rules imposed.

“Sometimes people experience guilt. They’ve been off the street and they want to help their friend. So, there is that component,” said Orr.

At the end, about half of the people that Curwen and Orr met, ended up back on the street, but the other half are living in their apartment. “Big Momma” and “Top Shelf” are volunteering at their church camp for children.

That is a huge transition from living on the street, to being housed, and now talking about what career goals they might have.

They can dream again.

CORRECTION: In a previous version of this story, it was incorrectly stated that Susanne Rust had worked with Thomas Curwen on “The Street Within” series. The story has been updated to accurately reflect that Francine Orr, not Susanne Rust, was the other photographer involved. (Sept. 1, 2020)