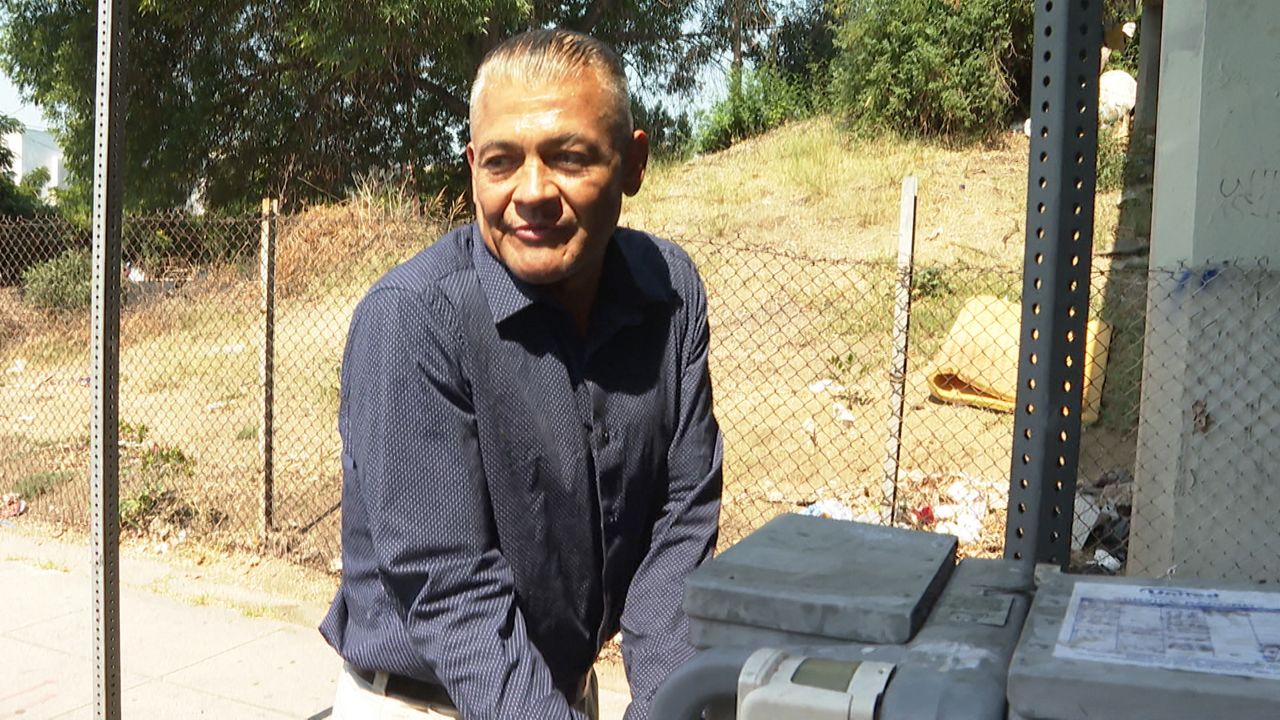 Angel Trejo, a homeless man who lives near a hand-washing station that’s located under a 101 Freeway underpass near Echo Park, says he doesn’t use it because it’s often missing soap or water.

Not All Hand-Washing Stations for Homeless Are Serviced Regularly

LOS ANGELES — Over 400 hand-washing stations have been rolled out in Los Angeles during the pandemic to help homeless people maintain basic hygiene but some are reportedly running out of water and soap and not receiving regular maintenance.

Angel Trejo, a homeless man who lives near a hand-washing station that’s located under a 101 Freeway underpass near Echo Park, says he doesn’t use it because it’s often missing soap or water. He lives under a piece of tarp with a few belongings and tries his best to maintain his personal hygiene.

The 50-year-old from East L.A. has been homeless for the past six years. He served 12 years in prison for robbery and he’s been trying to turn is life around ever since.

Trejo doesn’t have access to a shower for basic hygiene. Instead, he takes a jug of water into a nearby portable toilet for privacy and pours it over him.  There’s also a hand-washing station nearby which has no water, a missing soap dispenser on one side and Trejo shows me what’s on the other side.

“There’s no soap,” Trejo said. “There’s barely any soap in there but there is no water.”

Trejo says the hand-washing station was set up when the pandemic started and it was maintained regularly by city workers.

“They were at one time, coming every day. They were cleaning them up and then all of a sudden, they just, I don’t know, slacked off.” He says no one has come by since August 8th and I spoke to him on August 14th.

But not all hand-washing stations are neglected. There is a station in MacArthur Park on Alvarado Boulevard, near Wilshire Boulevard that was well-maintained and serviced daily. However, on the opposite end of the park, at the corner of South Park View Street and West 6th Street, a hand-washing station located there had water but no soap.

Spectrum News 1 reached out to L.A. Mayor Eric Garcetti’s office to find out about the discrepancies in servicing hand-washing stations but hasn’t received a response yet.

“Part of the problem that we have right now with trying to figure out how to provide services for these new hand-washing stations is that it was done on an emergency basis,” said Shayla Myers, a senior attorney with the Legal Aid Foundation of Los Angeles, which helps advocate for the homeless.

She says problems with the hand-washing stations are part of a much bigger issue – a long-time void of public health resources devoted to homeless people like Trejo. “The reality is there are simply not enough of the hand-washing stations and there are simply not enough toilets or showers or other public health infrastructure for the tens of thousands of people living on the streets of Los Angeles,” Myers said.

In the meantime, Trejo says he isn’t worried about catching coronavirus but wishes city workers would come by to service the hand-washing station more often and clean up the area.

Until then, he takes it upon himself to stay clean, just like his mother raised him.