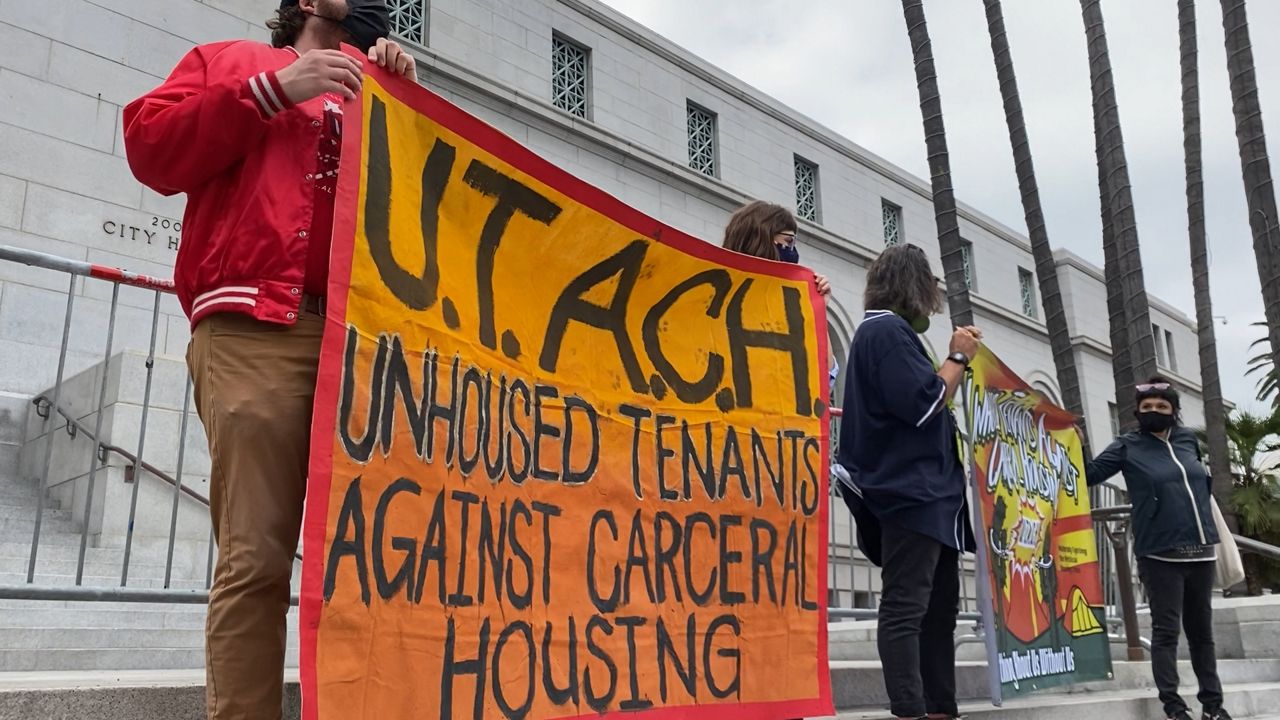 LOS ANGELES — On the steps of Los Angeles City Hall, Karyn Goldstein, a Project Homekey resident in Chatsworth, holds up a long disposable paper towel that she said residents were given one per day and forced to use as a bath towel on-site. It's one of many restrictions that she hopes to see changed.

"They expect you to go from everyday normal living to get rid of all that stuff. You can't wake up and have a cup of coffee, take a shower with a normal towel and turn on the TV to find out the news for the day or look on the internet to try and find jobs or housing," Goldstein said.

Goldstein had been homeless for two years. But she never imagined taking a room with Project HomeKey would come with so many restrictions like no guests, curfew, limited hours of leaving the site and not being able to have a key to her own space.

"I feel like as if I did something wrong. I'm a criminal. I committed a crime, and I'm in jail, or I feel like, I'm... I don't want to say how it really makes me feel. It makes me feel useless, worthless," Goldstein said.

Christopher Romero worked as a maintenance assistant at the same site but put in his two-week notice. He said resident concerns were often ignored or met with retaliation by staff.

"With bringing up anything up to management, they would just shut them down and say, 'You don't know what you are talking about, or oh yeah. We'll look into it,' and just give them the cold shoulder afterward," Romero said.

As a homeless person himself, Romero said it was too much for him to watch.

"It wasn't right, and I don't know why they treat people that way. It was unfair, and I couldn't handle it anymore—the anxiety attacks and the depression that would hit me after work. Just getting to work and then leaving from work, it was just unbearable," Romero said.

That's why Goldstein, Romero and other homeless individuals and activists are taking a stand against Project Roomkey and Project Homekey restrictions by forming the Unhoused Tenants Against Carceral Housing organization. Project Homekey and Project Roomkey sites are created, managed and funded by LAHSA, the state of California, the city and county of Los Angeles and various other entities.

In response to criticisms raised, LAHSA provided a statement about the restrictions that reads in part:

"The goal of this lifesaving program is to stop the spread of COVID-19 among our unhoused population. As such, the program design was built around wellness checks, minimal in-person contact, and the overall health and safety of those we serve… LAHSA welcomes a meeting with UTACH to discuss their concerns and how we can improve."

"Project Roomkey has brought in more than 8,000 Angelenos during the greatest public health threat in a generation, and is an essential part of Los Angeles' largest and most ambitious housing effort ever. Our service providers who manage and set the conditions for Project Roomkey sites are some of the most knowledgeable and capable housing agencies in the world, and are committed to delivering the highest quality of care possible."

While Goldstein took the time to share her perspective, the restrictions currently in place remain top of mind for her.

"Just thinking of the fact that I have to go back there before 9 o'clock because I don't have a pass, it infuriates me," Goldstein said.

Until then, Goldstein and other individuals who have shared their stories are hoping to see a more welcoming environment to be able to focus on the future.

"Over the last year, the homeless re-housing system responded to the onset of the COVID-19 crisis with a quickly organized multi-agency collaboration that has brought over 8,000 people experiencing homelessness who are vulnerable to COVID-19 inside. In partnership with FEMA, the State of California, and the County and City of Los Angeles, we launched Project Roomkey to provide an immediate option for our most vulnerable unsheltered neighbors to shelter in place. The goal of this lifesaving program is to stop the spread of COVID-19 among our unhoused population. As such, the program design was built around wellness checks, minimal in-person contact, and the overall health and safety of those we serve.

From the beginning, LAHSA and its providers have focused our efforts on developing housing plans with Project Roomkey participants to place them on a path to permanent housing and limit how many people return to unsheltered locations.

LAHSA welcomes a meeting with UTACH to discuss their concerns and how we can improve the Project Roomkey experience while protecting the health of participants as we support them in their journey to permanent housing."