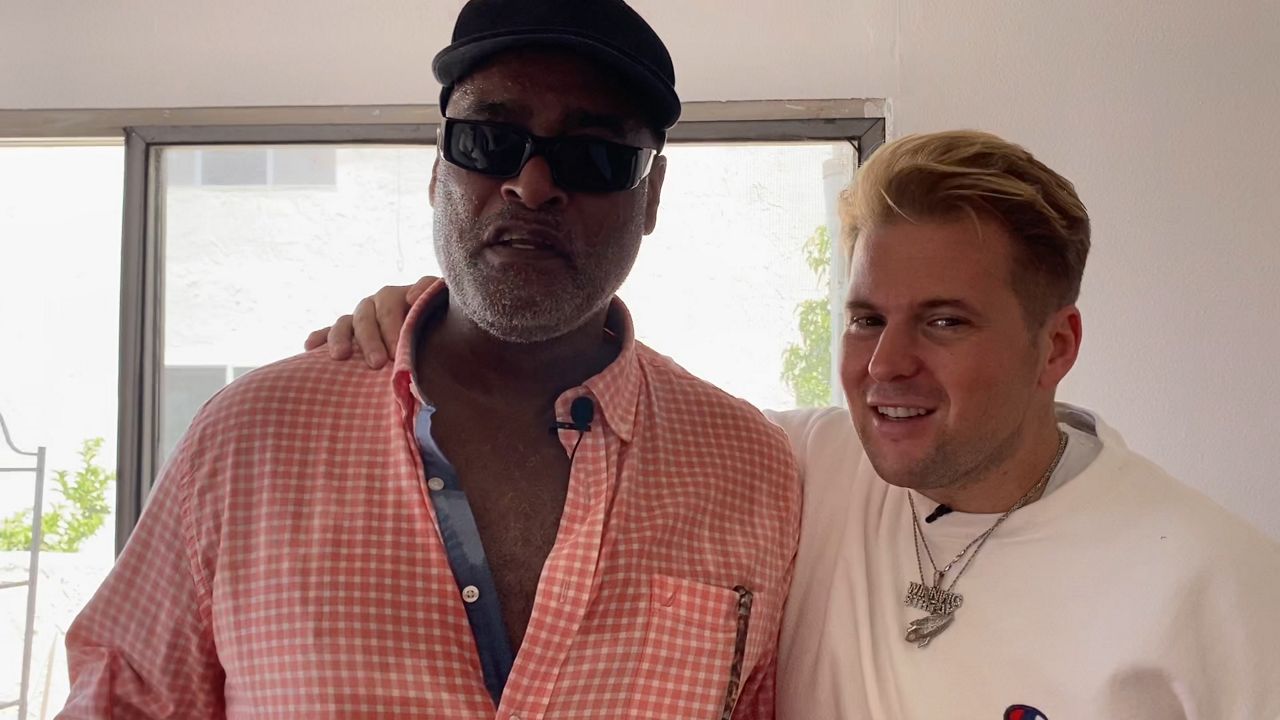 Artist makes comeback after years in jail, on Skid Row

LOS ANGELES — It's a story many have heard before, especially in Los Angeles: A struggling artist falls on hard times and ends up losing his way.

Richard Hutchins has been homeless for nearly a decade. But now, he's getting another chance.


While recently inspecting his new home, Hutchins reflected on just how far he's come. The Tarzana apartment he toured is only 23 miles from downtown Los Angeles, but it's light years away from Hutchins' old life.

Hutchins is an artist who can finally afford a roof over his head after living on the streets of Skid Row for six years and serving multiple stints in jail. Through it all, he's always had his art, having painted his first piece 50 years ago.

Art brought Hutchins a long way, but so did Charlie Rocket. Rocket and his crew are the ones who helped Hutchins get the Tarzana apartment and performed the last inspections before Hutchins moves in.

Rocket is a former music executive who also was dealt a challenging hand when he was diagnosed with a brain tumor at the height of his career. It made him realize life is too short not to follow your true passion.

"So all of my dreams came true, in more ways than I could ever imagine," Rocket said. "So I said, 'You know what? I'm gonna dedicate my life to making other people's dreams come true 'cause my dreams saved my life.'"

And now, Rocket's dreams are saving Hutchins' life. Their two worlds collided by chance at a Ralphs parking lot a few weeks ago.

Rocket is big on social media. When he took a liking to Hutchins, Rocket documented the experience, so that others could also meet him, and decided to use his connections to help Hutchins get on his feet.

Rocket's 3 million TikTok and 500,000 Instagram followers fell in love with Hutchins' art. Rocket would share some of the paintings Hutchins made using toothpaste, Skittles, coffee and M&M's on envelopes while he was still in jail.

"I thought I might just die before anybody knew that I was a painter and whatever," Hutchins said. "Usually, artists don't get discovered until they're dead. But God had another plan for me."


It was a plan that exceeded Hutchins' wildest dreams. Rocket created a website where he could sell Hutchins' paintings, and they were purchased back-to-back — not just from social media followers, but also celebrities such as Steve Harvey and Oprah.

In just a few short weeks, Hutchins has made nearly $200,000. It's enough to put a deposit on the first apartment he's rented in years until he can find and buy a new home with the help of his new financial advisor, Ben Berk.

Hutchins said it's only the beginning. He's planning to make the absolute most out of this stroke of luck.

"That's why I paint. My paint sells, then that's more money where I can get people off the sidewalk," he said.

Like Rocket was for him, Hutchins is now hoping to be somebody to lean on for someone else.