Cities, especially larger ones like Milwaukee, tend to be much warmer than the surrounding suburbs, especially at night, as a result of the urban heat island effect.

Have you ever noticed on a calm summer night how much warmer downtown Milwaukee can be when compared to places like Waukesha or other suburbs away from the city? It all has to do with the urban heat island effect.

"Urban heat island" refers to the tendency for a city or town to remain warmer than its surroundings. Downtown areas can often be over 10 degrees warmer than places outside the city.

This effect is caused mostly by the lack of vegetation and soil moisture, which would normally use the absorbed sunlight to evaporate water as part of photosynthesis. This is also the reason why forests are cooler than deserts.

Instead, the sunlight is absorbed by manmade structures such as roads, parking lots, and buildings. With little or no water to evaporate, the sunlight's energy goes into raising the temperature of those surfaces and the air in contact with them.

As the day progresses, a dome of warm air forms over the city as convection transports heat from the surface to higher in the atmosphere. 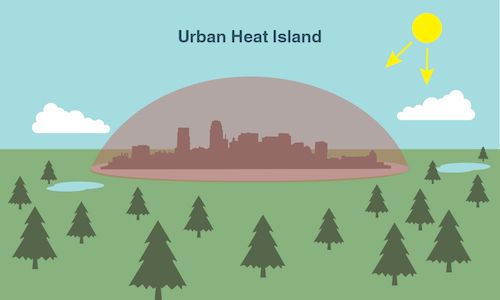 After the sun sets, temperatures remain elevated above the vegetated areas around the city or town, and so the heat island effect persists during the night as well.

There is also some evidence that the urban heat island effect modifies the rainfall patterns around cities, at least in the summertime.