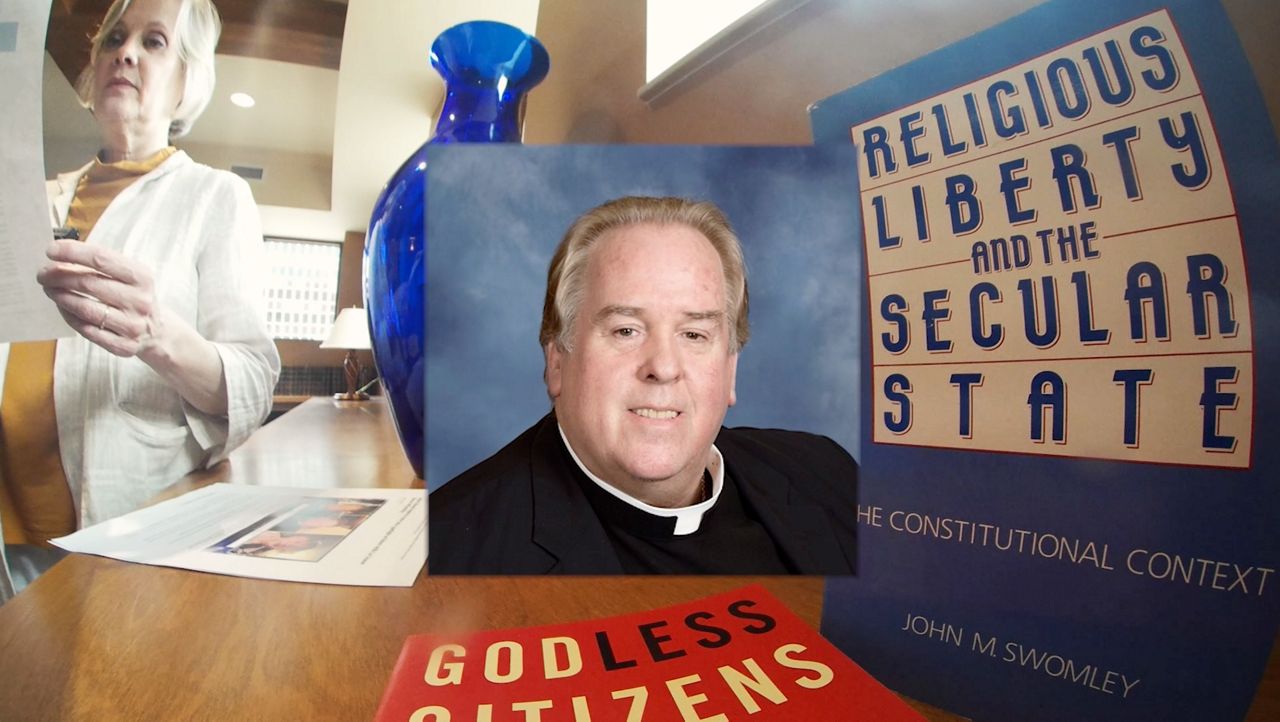 MADISON, Wis. — Madison’s Catholic Diocese has disciplined a priest for his comments relating to the Jan. 6 incident on our nation’s capitol.

“The Bishop of Madison has taken current disciplinary action regarding a Diocese of Madison priest, Fr. Richard Heilman,” said the Diocese of Madison in a statement in the Catholic Herald. “[Heilman] has engaged in online social media and other activity involving statements bearing inordinately on controversies stemming from the electoral political realm.”

Besides downplaying the attack, the St. Mary’s of Pine Bluff priest also spoke as a guest on U.S. Grace Force, a podcast that has featured clients like the Proud Boys and asked for donations to support the Jan. 6 defendants.

“I think it’s shocking and appalling, and rather disgusting,” said Freedom From Religion Foundation co-president Annie Laurie Gaylor regarding the situation. She said it borders on being “dangerous.”

Her nonprofit foundation proudly believes in the division of church and state.

She said her team of lawyers are closely monitoring the situation, and that this isn’t the first time her organization has sounded the alarm on a priest.

In 2020, her organization sent a formal complaint letter to the IRS on priest James Altman in the Diocese of LaCrosse after allegations of illegal politicking. Altman was ousted in 2021.

For now, Gaylor said she is still following Heilman’s specific case. She said she credits the Diocese for reeling in the priest and removing his formerly available YouTube sermons.

“So, we haven’t had to at this point, report to the IRS because they are doing the right thing, but it does show the problem of church rogue ministers and priests trying to use their tax-exempt authority to interfere with elections,” Gaylor said.

University of Wisconsin Law Professor Howard Schweber also weighed in on the case.

“I think this conflict has much more to do with the desire of the Catholic Church to control its priests and keep them out of partisan politics than with any specific issue about the IRS,” Schweber said.

“I think in the case of this priest and his bishop, it really isn’t about that,” Schweber added. “I think this is much more about the bishop asserting the authority of the church to keep their priests in line. There has been a tendency in the last 10 years or so for American priests and some American bishops to buck the Vatican’s control and try to take a much more explicitly political and partisan positions in public discourse than the church polity approves of,” he said.

The Diocese of Madison's statement said that there will be no further comment on Heilman’s discipline, as it’s being viewed as a private matter.

Spectrum News reached out to Heilman directly. Off camera, he said he was doing “okay” and that he was “praying about everything.”