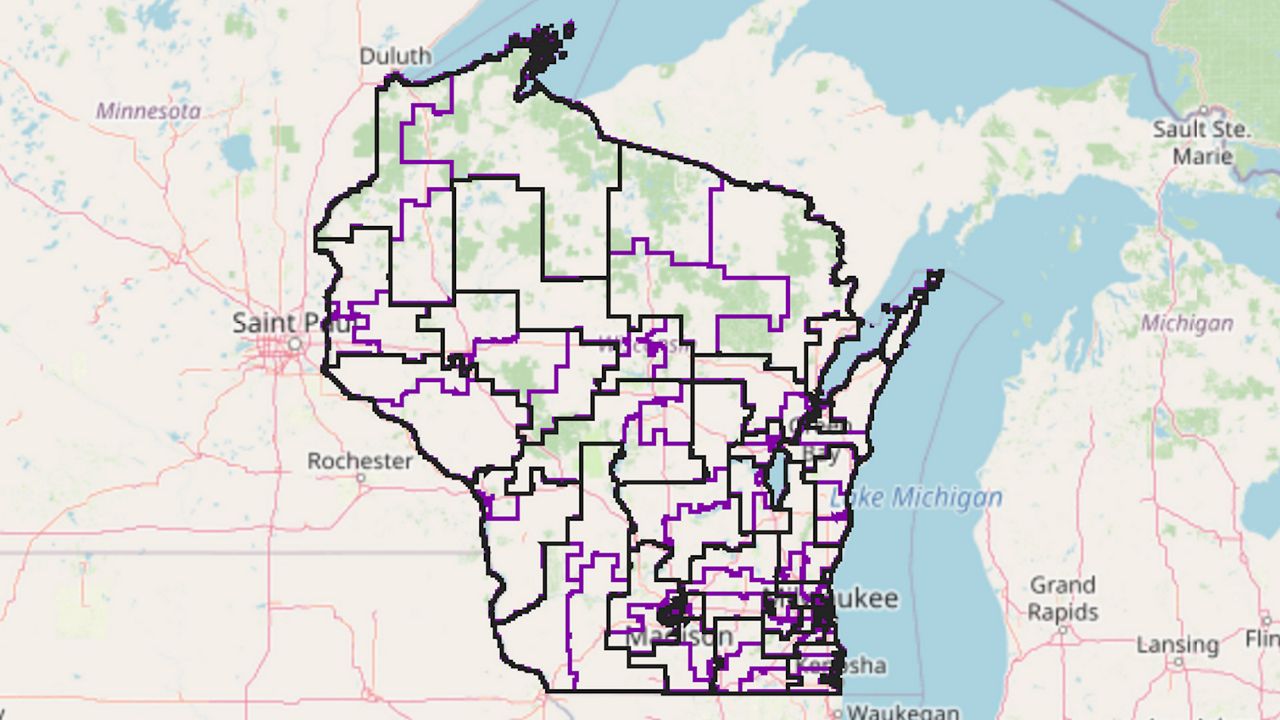 Redistricting in Wisconsin: 3 things to know about new maps

MADISON, Wis. — The Republican-controlled Legislature could vote on new legislative maps for Wisconsin as soon as next month. The public got its first look Wednesday at the plans lawmakers might vote on in the coming weeks.

The process of drawing new legislative boundaries happens every 10 years in conjunction with the Census. This time, the process is likely to end in court since Wisconsin has a divided government. However, before that can happen, there will be a public hearing and votes in the Legislature.

What are Republicans who control the Legislature proposing?

The maps are largely based on the existing ones that Republicans drew a decade ago, which has been the focal point of the debate. Democrats argue the new maps should be drawn from scratch because the current ones are gerrymandered.

“These new maps are nothing more than gerrymandering 2.0," Assembly Minority Leader Gordon Hintz (D-Oshkosh) said in a statement. "What Republicans have unveiled is simply a minor retooling of maps that were already found unconstitutional by the courts, using the same corrupt and secretive methods as last time around."

Gov. Evers shares that opinion and slammed the Republican maps in a statement Thursday.

“Republicans will have to do better than this if they expect me to sign either of these bills—they need to go back to the drawing board,” Gov. Evers said.

However, Assembly Speaker Robin Vos (R-Rochester) touted the public's ability to submit maps directly to the Legislature for consideration for the first time in state history.

The DrawYourDistrictWisconsin.com website had accepted feedback from the public from Sept. 1 through Oct. 15.

“The people of Wisconsin want transparency, they want checks and balances, and they want cooperation in how their districts are drawn,” Vos said in a statement. “The Legislature took into account plans submitted from citizens all over the state and considered submissions from the governor’s People’s Maps Commission, so we are confident these maps are fair for all Wisconsinites.”

Republicans had previously said they would not pass maps submitted by the People's Maps Commission, which Democratic Gov. Tony Evers created.

A resolution was also passed by the Republican-controlled Legislature last month that set guidelines for new legislative maps, including using Wisconsin's current maps as the basis for new boundaries.

Has there been any analysis of the proposed maps?

The state's Legislative Reference Bureau said the Republican maps have a pretty low population deviation from district to district, so they do meet criteria laid out by the courts.

However, factoring in partisan data, it seems Republicans would be almost certain to hang on to their strong majorities in both the Senate and Assembly, according to the Campaign Legal Center, which describes itself as nonpartisan.

The review also shows Republicans would be favored to win six out the state's eight congressional districts, especially WI-03, which is being vacated by retiring Democratic Rep. Ron Kind.

What changes did the People's Maps Commission make to its initial drafts?

The maps are updated versions of those the commission had released on Sept. 30 as initial drafts. After receiving some feedback from the public, members of the commission narrowed nine draft maps into seven, which they also released Wednesday for more input.

“The Commission has worked hard to update our preliminary maps, taking into account the input we’ve received since their initial release," PMC Chair Christopher Ford said in a statement. "We especially worked to ensure communities of interest weren’t split while ensuring that candidates of choice for minority populations get a fair shot. We trust that our transparent and deliberate process will more clearly reflect the communities where Wisconsinites live, work, and vote.”

The draft maps were reworked after criticism that the initial versions did not have enough majority-minority districts.

Over the last year, the nine-member, nonpartisan commission has held several public hearings to gather input. However, the Legislature is under no obligation to consider what the commission ultimately proposes.

The PMC public comment portal will be open for public feedback until noon on Oct. 27.