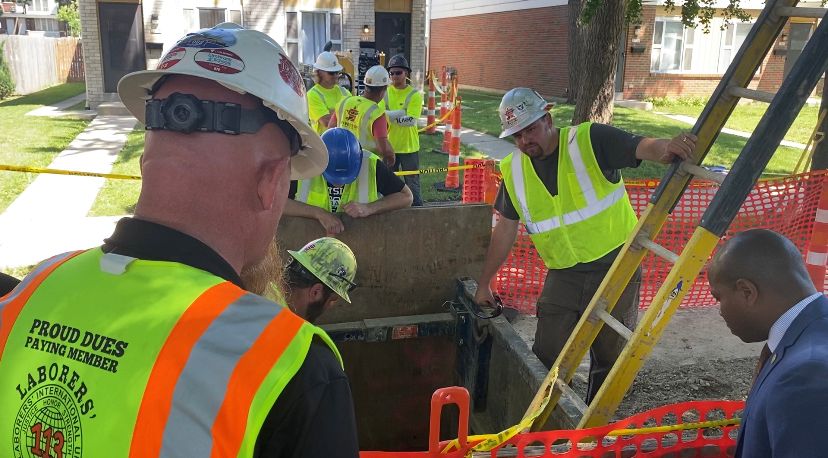 MILWAUKEE — Members of the Biden administration visited Wisconsin to show how the bipartisan infrastructure bill is supporting the removal of lead pipes in Milwaukee.

Deanna Branch said she never knew how damaging lead pipes could be until it affected her children.

“He was lead poisoned at the age of two and he’s nine now, so I’ve been fighting this issue for years,” Branch said. “We are at the point now where I feel like something is finally being done, so it’s a very 360 moment for me.”

After both of her children experienced lead poisoning, she became a member of the Coalition on Lead Emergency.

She now advocates for a lead safe city.

“There’s no safe level of lead in the blood for a child. The fact there is an issue where I feel like my kids are not drinking safe water,” Branch said. “I don’t know what can get more serious than not having clean water or not feeling like you are protecting your children when they drink water from the sink.”

The bipartisan infrastructure bill sent $48 million to Wisconsin for the removal of lead pipes.

Milwaukee alone has 40% of the lead pipes in the state.

Congresswoman Gwen Moore believes removing them is an important step for the city because 9% of children in Milwaukee have suffered from lead poisoning.

“That’s one in 10 of our kids in the city have been poisoned by lead, if it’s not lead in the water, then it’s lead paint because a lot of our older housing stock and these lead pipes,” Moore said. “This bill wasn’t passed a minute too soon.”

Mayor Cavalier Johnson also sees the investment as a boost to the local economy.

“Each service line replacement requires a team of people. It’s a mix of low skilled and highly skilled positions,” he said. “This additional funding means local contractors can expand and fill more of these positions, all of which are good paying and family supporting jobs which we need more of in this city.”

Mitch Landrieu, the senior advisor for President Joe Biden, believes the removal of lead pipes is vital to the next generation.

“When we put our minds to it, and put our shoulder to the wheel, we can actually do big things because all 330 million plus of us are a part of this mosaic that we call the United States of America that all for us need each other and it starts with our kids,” said Landrieu.

Seeing crews remove these pipes reminds Branch of why she pushed for it.

“Being shy and not speaking up and feeling bad about what happened, that wasn’t getting me anywhere. We have to stand up,” Branch said. “We have to use our voices to make something happened to prevent this from happening to other families.”

Branch said her children have recovered from their lead poisoning.

She is now looking forward to seeing the federal government continue supporting the city in this work.