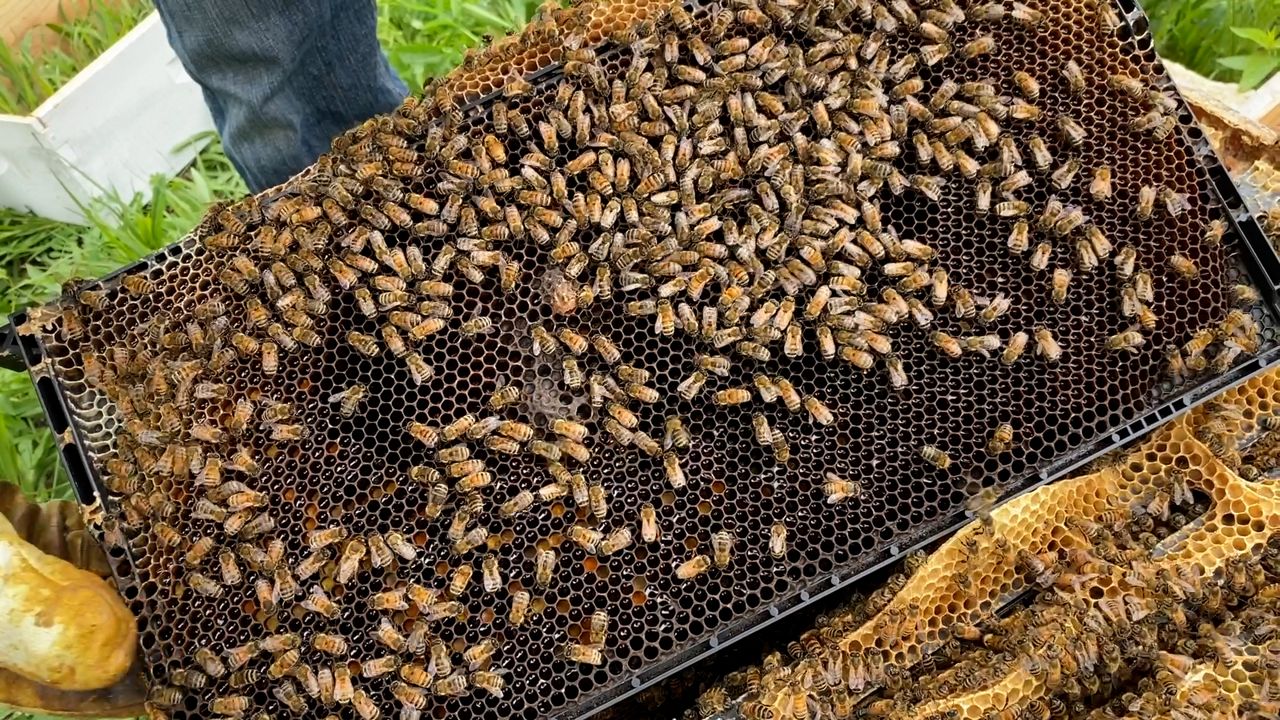 PLATTEVILLE, Wis.— The declining bee population in America is a top concern for environmentalists across the country.

At UW-Platteville, students are doing their part to help save the bees. The Bee Squad began nearly a decade ago.

Anywhere from 6 to 12 students on a given year care for 1 or 2 honeybee hives on campus.They're led by two faculty members.

“It started as a project in my invertebrate zoology course,” said Professor Becky Doyle-Morin. “It expanded quite a bit and we are now working closely with sustainability to not only have the habitats, but the plants to support the native pollinators.”

The Bee Squad is not for credit. It is simply a way for interested students to learn about bees and teach others about why they are a vital part of the environment.

“They get to see the lifecycle of these bees and the amazing things they can do, from building comb to harvesting honey in the fall,” said Professor Jeff Huebshman.

Jamie Matthews will be a senior in the fall. She has been a part of the Bee Squad for nearly two years.

She said it’s been a highlight of her time on campus.

“It’s been so much fun,” Matthews said. “I love watching them build their hive and it’s cool to see how much progress they’ve made every week when we check on the hive.”

The hive this spring already has about 10,000 bees. Donning a head-to-toe bee suit, Matthews said she’s never been afraid.

“Even my first time out, I was pretty calm,” she said. “They won’t attack you unless you provoke them.”

The honeybees on campus are not native pollinators, Huebshman explained.

The goal is to protect those species that call Wisconsin home.

“We’re also trying to educate the students and the public to preserve and provide habitat for our native pollinators,” he said. “Bumblebees in particular, but certain native species of wasps even.”

The group said it wants to successfully get this hive through the winter. It’s currently the only hive on campus, though the plan is to add a second hive next year.

“The idea is to have two hives going in different stages at the same time,” Huebshman said.

Matthews said she loves to educate others on the importance of bees. She has even convinced some family members to invest in their own bee habitats.

“I constantly get questions from my friends and family and I love talking about it,” she said. “It’s great to have that first-hand experience and also to influence others to help out the bees.”

Doyle-Morin said she hopes the public gains a better understanding of and respect for these tiny invertebrates that many people consider pests.

“They’re an essential part of our ecosystem,” she said. “It’s important for us to understand how to keep them as healthy as we can, as we’re encroaching on their habitats.”

Not surprisingly, summer is the busiest time of year for the Bee Squad. The team will check the hive weekly.

It’s a much different experience than during the winter, when the hive is checked only once per month to keep the bees as warm as possible.