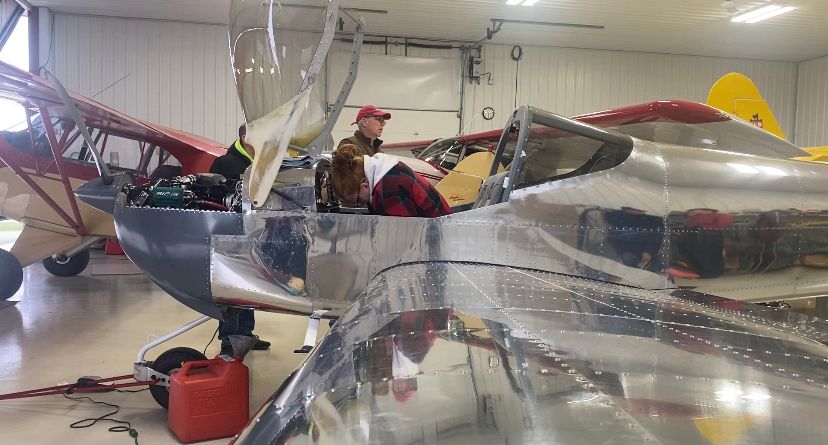 HARTFORD, Wis. — Some high school students in Hartford are taking advantage of a unique opportunity to build an RV-12 airplane.

Three times a week, Maggie Colwell comes to the Hartford Municipal Airport to work on the project with her classmates.

On this day, she found a gas leak while inspecting the aircraft.

“We had this happen but before it was leaking from the fuel pump and we fixed that, but now apparently, it’s leaking from somewhere else,” said Colwell.

Colwell is a senior and a member of Hartford Union High School’s Aviation Club.

She said the club has been working on this project since 2020.

“Looking back, I don’t know why they let a bunch of high schoolers start a plane so we started with these little starter kits and it was awful. They were so bad, super hard to do and all of us didn’t give up. Why? I don’t know but they were garbage, so looking back, they should not have let us touch an actual airplane but here we are,” said Colwell.

It was through these frustrations that Colwell discovered her passion.

“Basically what that is, is looking at the interactions between humans and machines and how to design those interfaces better for the person who is using them so that’s the next step for me and I ultimately want to end up in the aviation world because I love this group of people and any airport I step foot on, it’s just a great experience,” said Colwell.

Richard Glendon, a junior, has also worked on this plane for the past two years.

He says he always had an interest in aviation and building this aircraft only solidified it.

“I have learned a lot about the mechanicals in terms of what goes on in aircraft and everything, a lot of tech ed skills," Glendon said. "I have learned to grow as a person and become more responsible and get my stuff together."

Before this plane is able to take flight, Colwell and company have a checklist of items dozens of pages long to go through.

Then the Federal Aviation Administration will inspect the aircraft before giving the final clearance to fly.

“We will be able to go up for our first flight and then go from there so we will be able to spend time with one of our mentors because they are all certified to fly up in the plane, going around,” said Colwell.

Colwell said she is excited to fly this plane this summer, but the most satisfying part for her was the journey along the way.

Working together with her classmates to build an actual airplane is an experience many of her peers will never have.

They hope to build more airplanes with more students in the future.