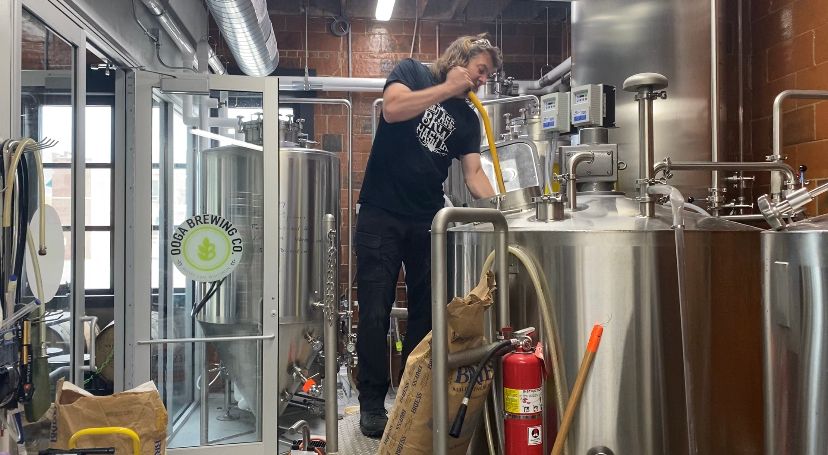 BEAVER DAM, Wis. — Ooga Brewing Company in Beaver Dam recently won gold at the World Beer Cup. However, for them it’s not only about crafting beer but it’s also about crafting community.

Jeff Scanlan wanted to brew beer for as long as he can remember.

“I just love the whole process: the smell of the boiling molds, the hops, there is a lot of sensory enjoyment that is really nothing drinking related,” Scanlan said.

He eventually turned that passion into the Ooga Brewing Company with another brewer. Along with Sarah Ferree, he opened the brewery in Beaver Dam in June 2019.

It wasn’t long before Scanlan discovered a love for making chili beer. That’s a type of beer that is infused with chili pepper.

“Years back, we found that the addition of fresh jalapenos to a really easy drinking beer which is a cream ale is a really nice addition,” said Scanlan.

He believed that since they have the best chili beer in the world, why not enter it into the World Beer Cup.

Ooga Brewing Company competed against thousands of other brewers from around the world. It earned gold in the Chili Beer category.

“I was shocked and very elated and then of course you got to come back and wash kegs and start brewing again,” said Scanlan.

He appreciates the recognition from his peers, but there is something he values more than winning awards.

“One of the things I was firm with at Ooga when we first came to Beaver Dam, is that our tap room culture is one where we are really try to blend in and give back to the community. So, this is a place for friends to gather. We do a lot of charity events, a lot of fundraisers,” said Scanlan.

There’s just one more thing he needs to do before he wraps up his day.

“People think I make beer, but mostly what I do is just clean,” joked Scanlan.

This lets him repeat the process of creating more beer for people to enjoy while giving the Ooga Brewing Company a platform to give back to the community.