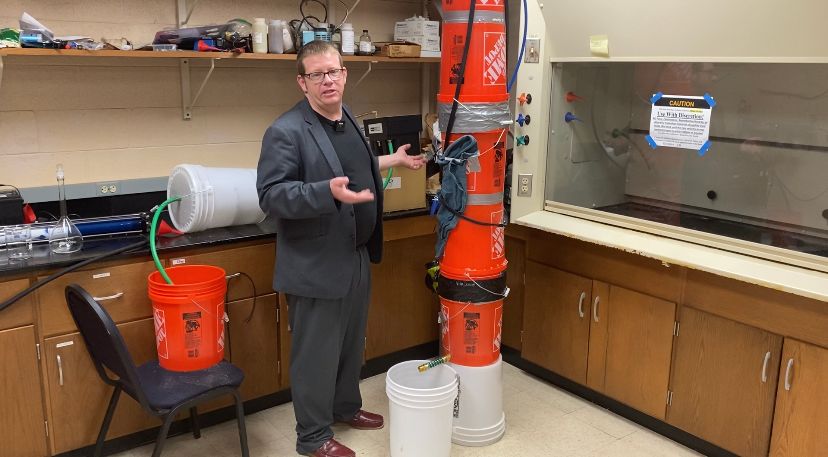 MILWAUKEE — A University of Wisconsin-Milwaukee PhD candidate is conducting research on how to decontaminate oilfield-produced water.

Joshua Swigart used to work as an Environmental Consultant.

Now he is working on a project at UWM to decontaminate water produced from oilfield wells. Part of this process is desalination.

“The boost pump is forcing the water into the desalination system. It’s essentially a reserve-osmosis system that removes salts,” said Swigart.

The pure water is separated from the contaminated batch. He then takes that to his make-shift oil field water recycling device. It is an air stripper that removes the rest of the contaminants.

“What this leaf blower did is simulate forced air, and it forced the air upward while the water was going downward and the vibration along with surface added by the packing peanuts allow the volatile-organic compounds and the water to separate,” he said.

Swigart said the goal is to create a multiple-step process to turn water from these oilfield wells into potable water.

This would also allow for lithium to be extracted from these wells, which Swigart believes will be vital to the future.

“We are trying to fuel our future and in the future, where most of our vehicles will run on batteries and electrical vehicles,” Swigart said. “We are going to have to have a much larger source of lithium and we need to get that here in the U.S. rather than overseas."

He is proud of the progress he has made with his research.

Swigart now plans to build a stainless steel model of the air stripper that can be taken to market.

“I was able to bring it to fruition and now I’m proving that it will work and it can be done,” he said. “So, where there is a will, there is a way.”

He is thankful that the UWM Research Foundation Catalyst’s Grant has helped fund this research for his company “Expert Industries Environmental Research Group.

Swigart said it’s all about sustaining our future needs while also protecting the environment.