A flooded street in Reedsburg, Wis., after heavy rainfall in 2008. (AP Photo/Andy Manis)

MILWAUKEE — Once upon a time, dealing with floods meant building structures to whisk water away downstream.

“The only way we did flood management was to put in a concrete channel, or put water into a pipe and just force it downstream,” said Kevin Shafer, executive director of the Milwaukee Metropolitan Sewerage District.


But a changing climate is poised to bring more extreme rainfall to Wisconsin — and push the state’s infrastructure to the limits.

As the weather becomes warmer and wetter, flood risk is likely to rise as well, as the Wisconsin Initiative on Climate Change Impacts reports. The state has already seen an increase in extreme rainfall in recent decades, and the biggest storms are poised to see the biggest upticks.

But much of the infrastructure facing off with this severe weather — from bridges to dams to storm drains — was designed to deal with climate conditions from our less-extreme past.

Now, flood managers are reckoning with outdated safety standards and hard-to-replace infrastructure. And some are turning to creative solutions, including harnessing the power of nature, to keep Wisconsin above water.

“The problem is, the weather's changing faster than we can build,” Shafer said.

When it rains, it pours

​For the Badger State, climate change is turning up the heat — and turning on the faucet.

“When the air warms, it can hold more water,” said Daniel Wright, an associate professor of civil and environmental engineering at UW-Madison. “And more water in the air means more potential for heavy rainfall.”

A recent analysis from Climate Central found that across the U.S., rainfall is becoming more intense, with climate change “supercharging the water cycle” and leading to higher flooding risks.

Wisconsin is no exception: Average precipitation in the state has gone up by around 17% since 1950, according to the WICCI assessment. Extreme rainfall in particular will likely become more common in the coming decades, the report concludes, bringing flooding concerns from rising groundwater or overflowing streams.

The amount of extra rain doesn’t exactly line up with the amount of extra flooding, added Wright, who is also co-chair of the WICCI Infrastructure Working Group. There are other factors that affect the flow — like where that heavy rain ends up falling.

Most rain that hits concrete and pavement will slide right off, which means more developed land can add to flood risk. But soil can help soak up some precipitation, especially if that soil is pretty dry to begin with, Wright explained.

Still, the ground can only soak up so much water at once, said Chad Berginnis, executive director of the Association of State Floodplain Managers. With more rain falling in extreme events, and more heat drying out soil at other times, it’s possible to have drought and floods in the same year.

“You're getting less beneficial rains,” Berginnis said. “And more of these high intensity rains that just cause a lot of runoff.” 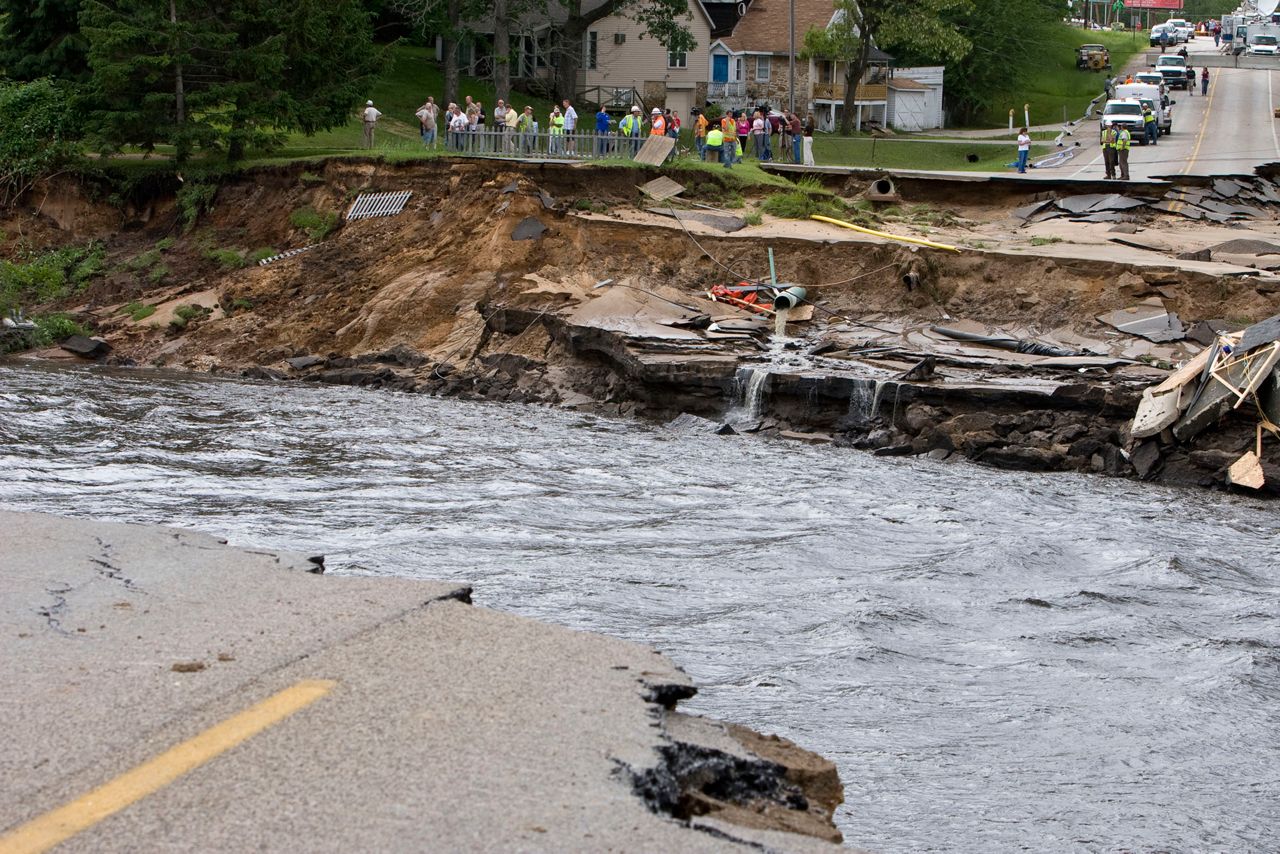 We’ve already seen some major flood impacts in Wisconsin, said Robert Montgomery, chair of the Infrastructure Working Group. Recent years have brought a variety of extreme floods, across both rural and urban parts of the state.

In 2008, record rainfall piled onto already-high stream levels across southern Wisconsin to cause historic flooding. More than 40,000 homes and 5,000 businesses in the region were damaged, the National Weather Service reports.

In 2018, a round of massive floods was enough to send all of Wisconsin into a state of emergency. Parts of the Driftless Area saw more than 10 inches of rainfall, while drivers in Madison were stranded as water swept through city streets.

Berginnis, who lives in Madison, said seeing the devastation that year caused “a lot of shock” — even for someone who’d spent decades thinking about floods. And he’s bracing for more shocks to come.

“We know flood risk is going to get a whole lot worse before it gets better,” Berginnis said.

​When it comes to infrastructure, there’s a key feature to remember: “It's there for a long time,” Montgomery said.

Infrastructure projects are designed to last for decades or even centuries, experts pointed out. Generally, it’s not easy (or financially feasible) to tear them up and replace them whenever conditions change.

So, as weather patterns have shifted, infrastructure has struggled to keep up. As the WICCI authors write, everything from roads and airports to dams and stormwater systems — “everything that supports our lives and livelihoods” — was built to deal with past climate realities that are quickly becoming outdated.

“We're building infrastructure that doesn't even reflect current rainfall conditions,” Wright said. “And there's every reason to think, based on the best available climate science, that extreme rainfall is going to continue to be a bigger and bigger problem.”

Take the idea of the “100-year storm” — which is supposed to have a 1% chance of occurring in a given year.

Many infrastructure projects in the past were designed to handle our past calculations of a 100-year storm, plus a little bit of wiggle room, Berginnis explained. But as the climate shifts, storms are surpassing these standards — or even reaching higher standards like 500-year storms — much more than the names suggest.

To get our infrastructure ready for future conditions, we’ll need better data on what those future conditions will look like, Berginnis said. Right now, “we are flying blind a little bit, from a national perspective,” he said.

In Wisconsin, Wright is leading one effort to paint a clearer climate picture. The Wisconsin Rainfall Project offers data on current extreme rainfall conditions across the state, and also uses various climate models to predict what future rainfall might look like.

It’s key to have these kinds of future projections available while designing today’s infrastructure projects — otherwise, “we’re getting locked into a problem that would be very, very expensive to fix down the line,” Wright said.

Even if we have the data, though, there are other challenges to deal with in adapting to future flood risk, experts said. 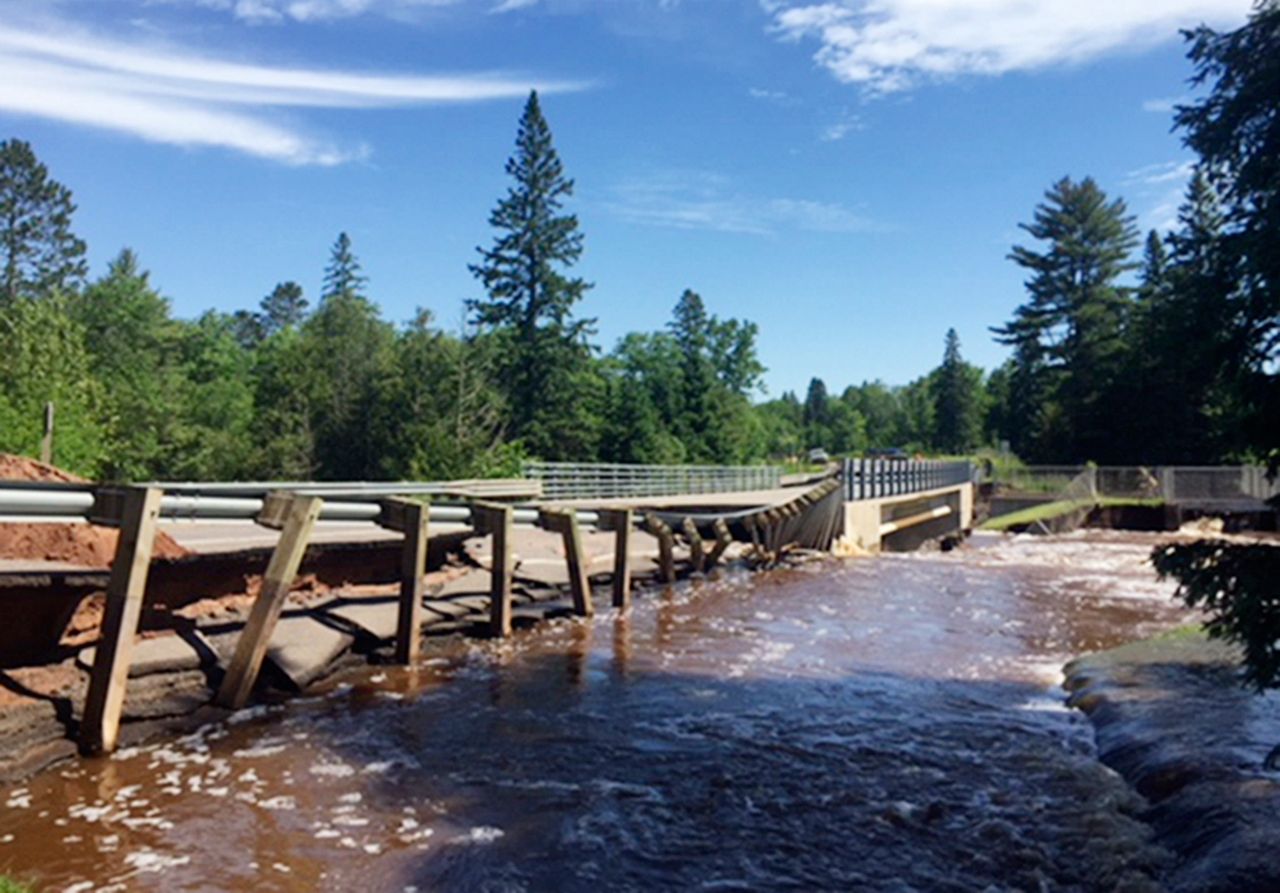 In a 2020 WICCI survey of infrastructure managers in Wisconsin, almost all respondents said they were concerned about increasing precipitation and urban flooding.

But when it came to tackling those concerns, around half said that changing infrastructure was too expensive, and 43% said it was hard to know where to start with climate change planning.

In fact, many managers said they didn’t use the term “climate change” in their planning, or pushed back on the idea of climate change, said Maria Hart, a transportation planner and Infrastructure Working Group member who helped lead the survey.

​Up in the northeast part of the state, the East River winds its way through 13 different municipalities around Brown County before flowing out into Lake Michigan.

But when that river floods — as it tends to do when lake levels are high, or when runoff collects from city sidewalks — those borders don’t matter, said Kayla Wandsnider of The Nature Conservancy.

“What happens at the top of the watershed also affects what's at the bottom of the watershed,” Wandsnider said. “So even though municipalities and counties are confined by their governmental boundaries, that doesn't mean the water is.” 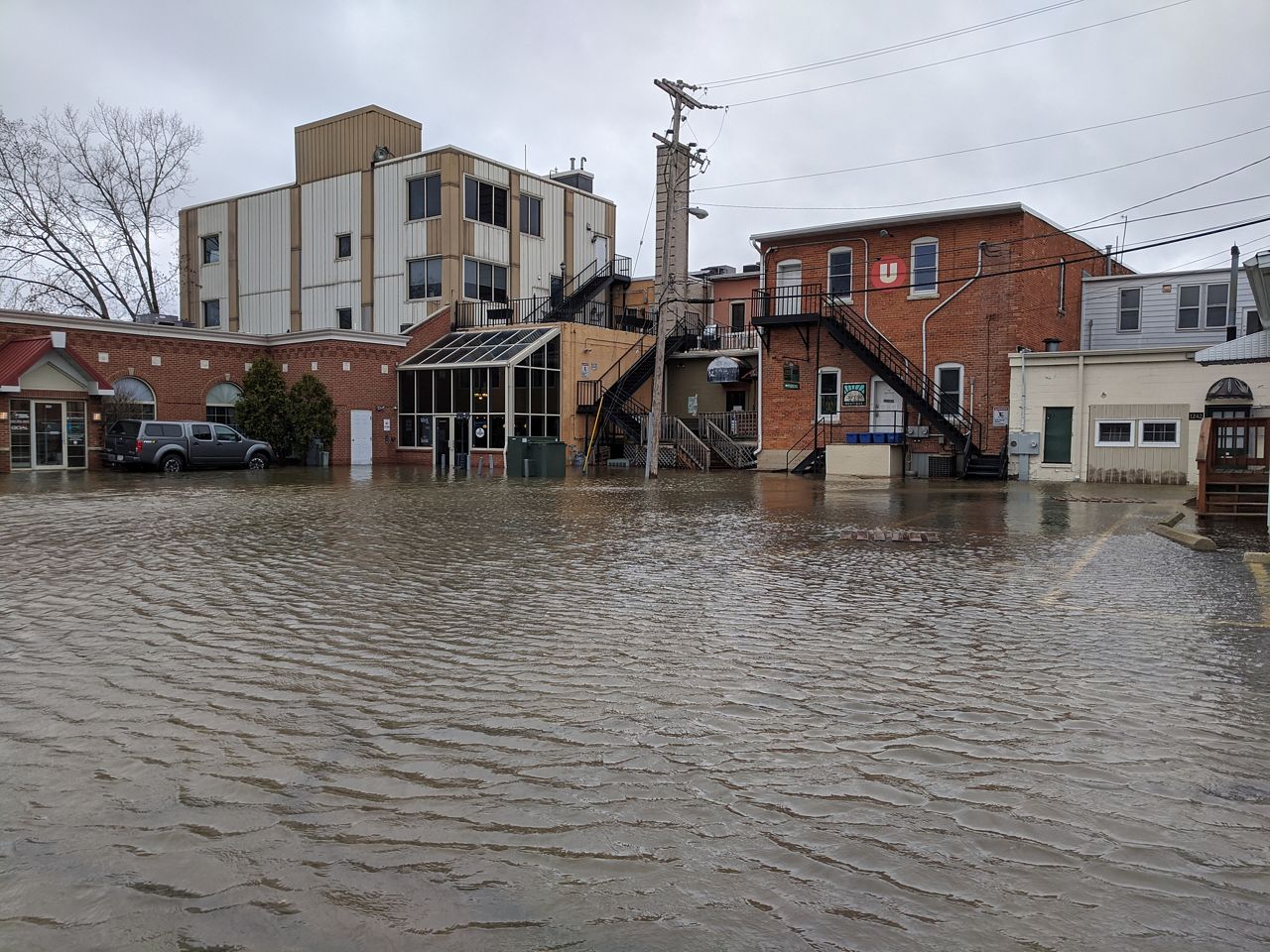 Wandsnider is the coordinator for the East River Resilience Collaborative, an effort to bring communities together and “break down their siloes” to address the issue of flooding. With the region seeing an uptick in precipitation, plus a rapid pace of urban development, floods are becoming a major concern — one that will take a team effort to address, Wandsnider said.

By turning to green infrastructure solutions, she’s hopeful that these communities can get nature on their team, too.

“For me, personally, a resilient future is where people and nature are able to coexist in a more productive manner,” Wandsnider said.

In recent decades, a lot of flood managers have started mixing in green infrastructure — the kind that harnesses natural processes — along with the “gray infrastructure” of concrete structures, Berginnis said.

Along the East River, that may involve planting native vegetation that can soak up rainfall, or creating ponds to retain agricultural runoff, Wandsnider said.

In the Milwaukee area, MMSD has also turned much of its flood management focus toward green approaches, Shafer said.

“The whole movement towards natural infrastructure gives me hope for the future,” Shafer said. “I think it's just the way to go. And I think that it solves so many of our urban ills that we have.”

Sometimes, that has meant taking out earlier infrastructure designed to control floods. On parts of the Menomonee River, for example, steep concrete channels built in the mid-20th century were meant to carry rainwater downstream — but ended up blocking fish habitats and creating fast flows that posed a hazard to humans.

MMSD projects have worked to take out some of that concrete on the Menomonee and other waterways, bringing back some of the natural flow, Shafer said. 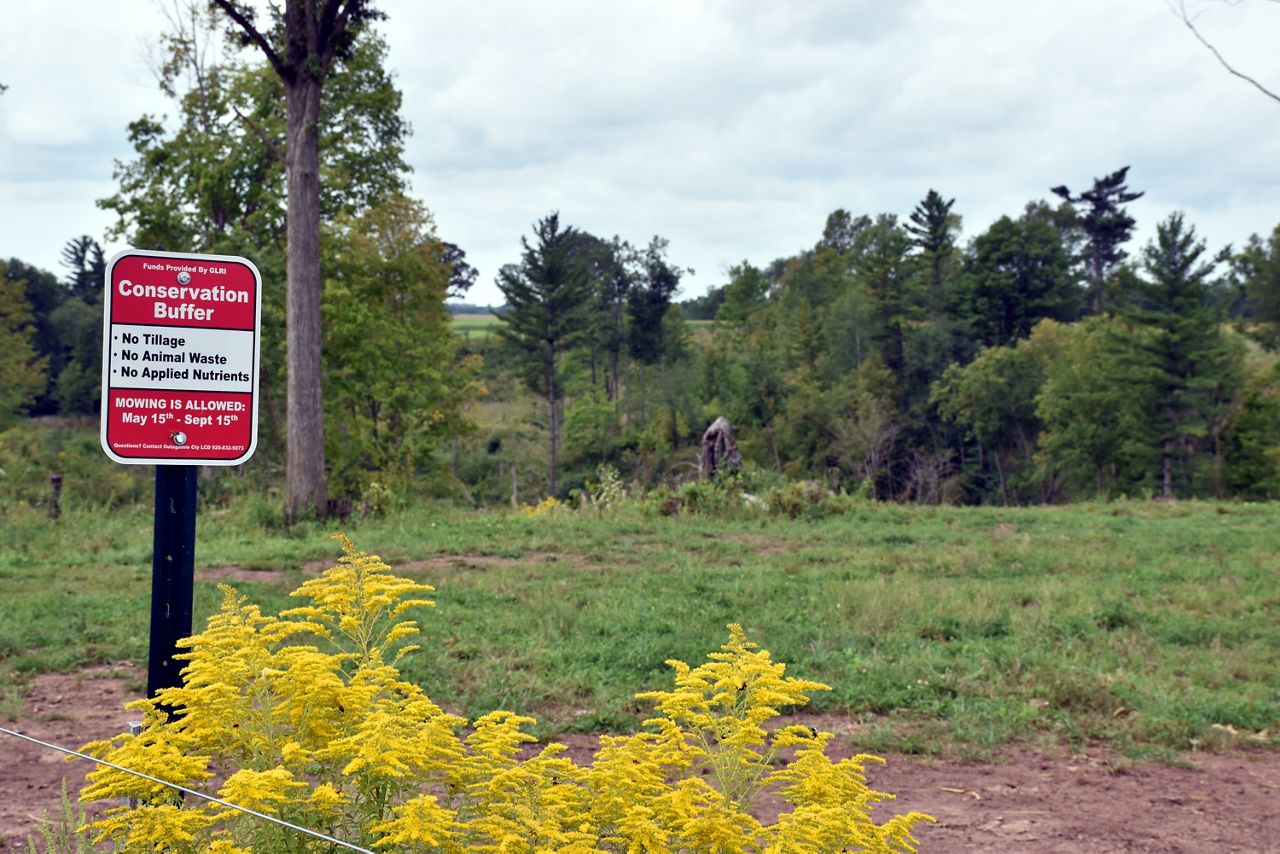 A farm in the East River watershed with conservation practices in place to prevent runoff. (Emily Mills/TNC)

Other green infrastructure projects are also designed to help soak up rain as it falls, he said — like the Greenseams initiative, which buys up land around waterways to conserve as natural areas. And he emphasized that even individual efforts, like putting a rain barrel out, can make a difference for neighbors downstream.

“Every drop of water that we can manage where it falls, and put it to good use, reduces the risk of flooding downstream,” Shafer said.

Still, gray infrastructure remains a key tool — as long as it can adapt to the times, experts said. With our quickly changing climate, “we can’t stand on past approaches,” Berginnis said.

That may mean building beyond the traditional “100-year” standard, to make sure things like culverts and stormwater systems can handle the more extreme storms coming our way, Wright said.

In some cases, it might mean not building at all, Berginnis said: “There are just some really hazardous areas that we shouldn't be putting stuff in the first place.” With flood damage costs already high, and rising at a quick pace, sometimes restricting land use might be the best way forward, he said.

All of this requires a careful balance of risk and reward, experts said. Building too big can waste precious funds, but building too small can lead to devastating damage.

In any case, managing future floods needs to be a priority, Shafer said — even though a 100-year storm doesn’t come around every day.

“We just never want to become too complacent with this,” Shafer said. “Especially with the weather changing constantly.”