MADISON, Wis. — From Mars missions to moon colonies, the human species has some ambitious travel plans in the works — ones that stretch way beyond our planet.

“Space exploration is the big challenge of this century,” said Elena D’Onghia, an associate professor of astronomy at the University of Wisconsin-Madison.

But space is full of dangers for human travelers. And one big concern for longer missions is the issue of cosmic radiation — energetic particles that float around in space and can cause damage to the human body.

Now, D’Onghia and other UW researchers are trying to figure out a way to shield astronauts from these particles as they make their way deeper into the solar system. Her team recently received funding from NASA to keep working on their concept — a portable magnetic field that can deflect radiation from a spacecraft.

Cosmic radiation may sound like a sci-fi weapon. But it’s a very real threat for humans in space, D’Onghia said, and a crucial issue for humans to crack before we embark on our interplanetary journeys.

“Until we solve this problem, I don't think it's possible to have space exploration from humans on long-term missions,” D’Onghia said. “We won't survive.”

​Out in space, what may look like an empty void is actually filled with tiny particles zipping around at high speeds.

Space radiation — which can come from exploding stars or other events even beyond our solar system — is all around us in the universe. But here on Earth, we have some defenses against these charged particles, D’Onghia explained.

“Our species is quite protected on Earth, because our planet has a magnetic field,” she said. “It’s like a cocoon around the Earth, and basically deflects away all these particles coming from the sun, or coming from our galaxy.”

That magnetic field extends beyond our planet, too, said Paolo Desiati, a research scientist at UW-Madison who is collaborating with D’Onghia on the project. When astronauts are stationed at the International Space Station, for example, they’re still in the range of Earth’s protective shield, he said.

But “if you go even farther away on the moon, or Mars, then it's a different question,” said Desiati, who studies cosmic rays at the Wisconsin IceCube Particle Astrophysics Center.

Once space travelers move out of Earth’s magnetic field, the particles from cosmic radiation are able to pass through their bodies, D’Onghia explained. That’s bad news because as these particles move through, they leave behind deposits of energy that can damage the human body.

The exact medical effects of cosmic radiation exposure are still being worked out, the researchers said — but could include everything from cardiac damage to neurological issues to DNA mutation.

So far, astronauts have only ventured outside of Earth’s magnetic field for short trips, like missions to the moon that last a few days, D’Onghia said. As we set our sights farther out in space, though, we’ll have to deal with radiation on a chronic basis.

“For a very long trip to Mars, the problem is that this low exposure of radiation for several months, or one or two or three years, is potentially very dangerous,” Desiati said.

From brainstorm to NASA grant

​Developing technology for NASA isn’t exactly a normal day’s work for these two researchers. Their usual research tends to be more abstract, with D’Onghia digging into the dynamics of far-off galaxies and Desiati studying the properties of cosmic rays.

But after a health scare a few years ago — from which she’s now recovered — D’Onghia said she was thinking about how she might make a more direct impact. 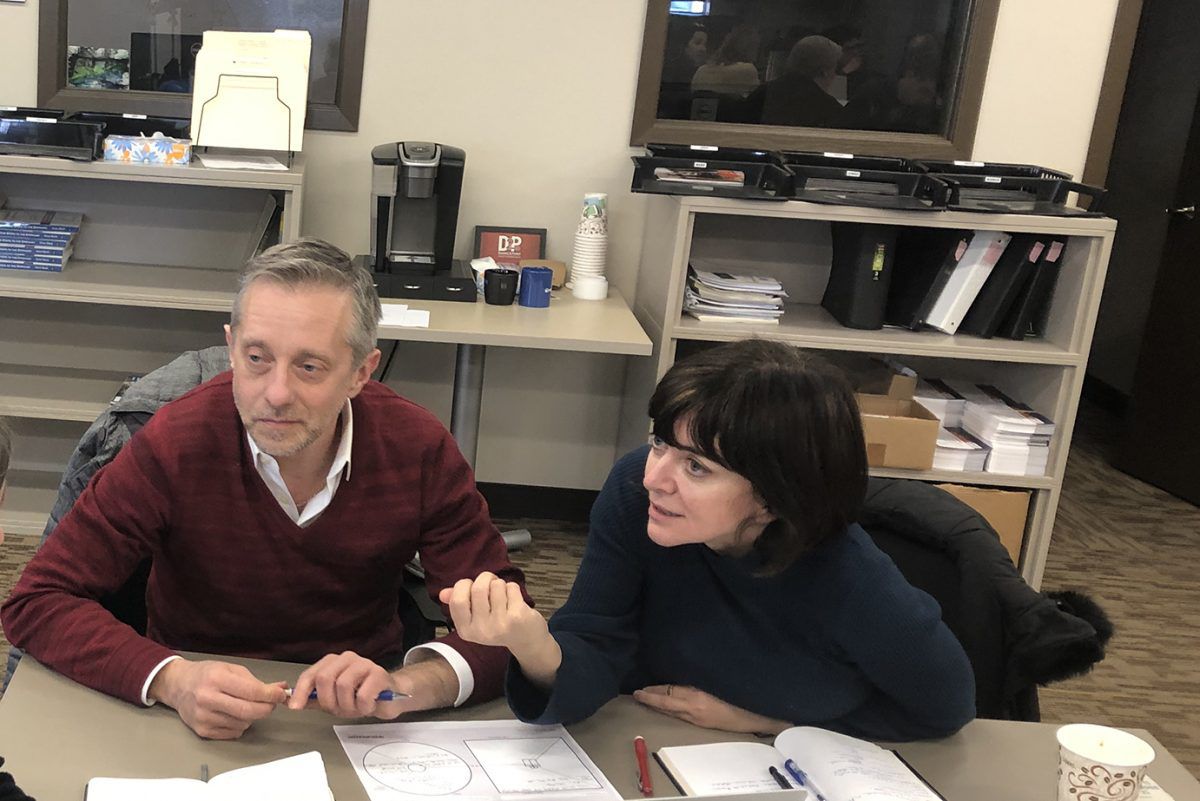 “I thought that, you know, life can be short,” D’Onghia said. “I wanted to do something that was more useful for society.”

So, when the issue of space radiation came up — as the two were brainstorming at a coffee shop, which they did regularly — they decided to take it seriously. They got to work looking for a way to prevent dangerous particles from getting into astronauts’ bodies.

To deflect radiation during space missions, D’onghia and Desiati figured they could take inspiration from what happens on our own planet, where magnetic forces keep us protected.

“We just imitated what nature does,” D’Onghia said. “Usually nature is more clever than we are.”

On Earth, the magnetosphere is maintained by super-hot forces deep in the planet’s interior, D’Onghia said.

To create their own radiation shield, the researchers decided to rely on superconductors, which run strong electric currents through a series of coils to generate magnetic forces. By positioning the coils in certain ways, Desiati said they’re able to shape the protective field to fit their needs.

“We can build an artificial magnetic field that we can put around the spacecraft,” Desiati said. “And that behaves a little bit like a mini Earth.”

But spaceflight is delicate, and creating a system to fit its constraints can be tricky. Past researchers had already proposed using magnetic fields, but had trouble designing something that would be light enough to get launched, Desiati said.

These were questions that the two researchers couldn’t tackle by themselves — so they started bringing on some help.

Part of that involved signing up for UW-Madison’s “Discovery to Product” program, or D2P, Desiati said. The program helped them think like entrepreneurs, figuring out questions of funding sources and potential customers to turn their idea into a reality, he said.

The researchers also knew they needed some engineering minds to help take on the technical questions. So they signed on a group of undergraduate engineering students at UW-Madison, whose creative thinking helped come up with the device’s design, D’Onghia said.

The project has come a long way, from starting off as a coffee shop conversation to taking shape as a side project to the researcher’s normal workloads, Desiati pointed out.

“We had zero dollars to do this,” D’Onghia said. “And it was during the pandemic.”

​Earlier this year, that design — which the team has named CREW HaT — earned a nod from NASA as part of its Innovative Advanced Concepts Program. The program is meant to recognize ideas that could transform future space missions, and will give the team funding to keep refining their concept, D’Onghia said. 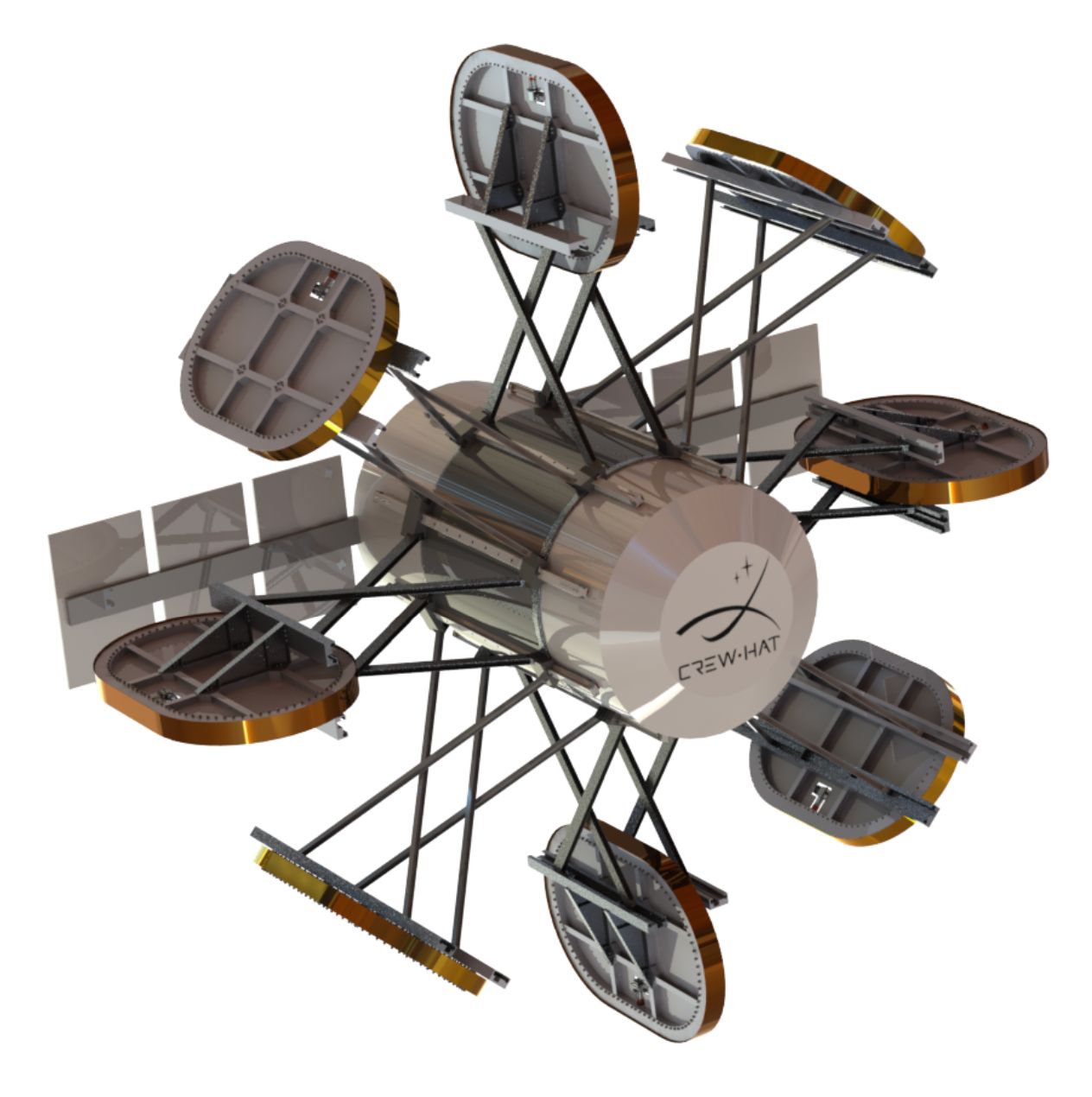 When you’re trying to send something into space, one of the big issues is weight. The team’s design uses a new setup to deflect particles while staying as light as possible, Desiati said.

Past attempts had relied on the idea of a closed magnetic field, he explained, where electrified coils get wound up in tight cylinders. Placing these cylinders around a spacecraft creates intense magnetic forces that can bounce particles away like a mirror — but also requires massive, heavy structures to hold everything together, he said.

The CREW HaT model cuts down on some of that weight by creating an open magnetic field, Desiati said.

In this setup, the coils are more spread out, and the magnetic forces aren’t as intense. But the magnetic field stretches farther out into space, so that the particles gently get diverted away as they come close to the vessel — more like what happens on our planet.

With the help of the NASA grant, D’Onghia and Desiati will now keep studying the possibilities and limitations of their design. They’re hoping to keep expanding their team with the help of graduate students, D’Onghia said, and also working with medical researchers to look at what happens to the human body when it absorbs cosmic radiation.

Both researchers have been fascinated by space for many years. Desiati recalled being awed by a glimpse of the Milky Way as a child, while D’Onghia said her younger self was amazed by how perfect Saturn’s rings looked through a telescope.

And now, they’re excited by the possibility that their work could play a practical role in the future of space travel.

“We like physics and science. We like the discovery,” Desiati said. “But things are slow in academia.”

Still, they’re not getting ahead of themselves. Desiati said that getting the green light from NASA was an honor — but also turned up the pressure for the project.

“Of course, there's a lot of work to do,” D’Onghia said. “But that's the exciting part.”