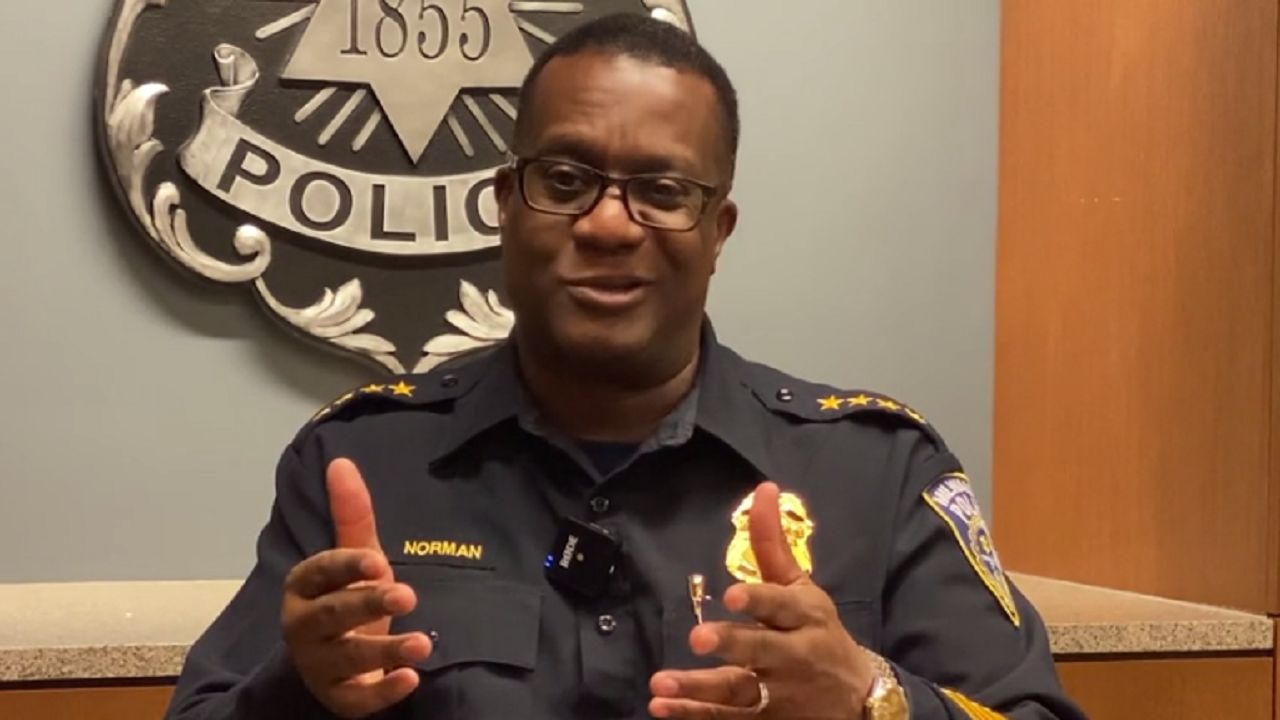 Homicide numbers reached new highs in 2020 and 2021. Also in that same time period, car thefts were up more than 130% and reckless driving led to a spike in deadly crashes.

MPD Chief Jeffrey Norman shared his thoughts on what it will take to curb violence in Milwaukee.

At the scene of an officer shot near 25th and St. Paul earlier this year, Chief Norman told journalists, “Our community’s tired of this.”

Norman entered the new year as the new chief of Milwaukee police in the middle of a public safety crisis.

“There’s a point where we have to start thinking about how did we get to this particular point and what are the opportunities to avoid,” Chief Norman shared.

He will tell you the only thing that’s changed from his time as acting chief to chief is the title. Norman said, “not the work and not what we’re focused on.”

Norman became acting chief of the department in December 2020. He was officially sworn in last November, putting an end to more than a year of turmoil surrounding the position of top cop.

“As an interim chief, you always feel like you’re a substitute teacher. Yes, you are in control of the classroom today, but you might not be there tomorrow,” he said. “And that affects people’s behavior.”

The chief said from day one he hit the ground running. He called it “rubber meets the road” when it comes to getting things done.

“As a former district commander, as a former assistant chief, this is not something that was overnight,” he said. “A one-stop gimmick. Being born and raised, a long term, continued resident of the city. This is what I know.”

And there’s a lot on this chief’s plate. Reckless driving is a problem that only seems to get worse in the city. It’s not hard to find drivers in Milwaukee making dangerous choices like speeding and running red lights.

As acting Chief, Norman started the Traffic Safety Unit (TSU) in February 2021. This is a permanent unit and not a short-term effort to increase patrols and target high-risk areas.

“People appreciate what we’re doing out here,” TSU officer Charles Stegeman said. “They see us make the traffic stop and people honk and clap as they drive by in some cases.”

When we rode along with Officer Stegemen he picked up a red light runner and two speeders right away. The first driver he clocked on Sherman Boulevard was going more than 50 miles per hour in a 30 mile an hour zone.

When Stegeman went to lights and sirens, the driver took off. He dropped the pursuit of safety reasons but followed at a distance to be sure the driver didn’t hit anyone.

Overall, the TSU is not just about enforcement, but also education.

“Even if I’m on one traffic stop, you’ll see people slowing down because they know we’re out here and then that just kind of sets the whole flow,” Stegeman pointed out.

There’s also a way the community can be part of the solution. A website dedicated to the unit lists where the TSU will be deployed. There’s also a page where neighbors can anonymously report reckless driving.

“This is a reaction to what’s been asked from the residents in regards to having this type of dedication and also focus,” the chief said. “I always understand there’s more that we can do.”

Last year, more than 20,000 charges for speeding in the city were filed by municipal court. This marks a big jump over the last two years.

In January of this year, the TSU handed out 674 citations for speeding. Most of those drivers were going 20-24 mph over the limit.

So who's doing the reckless driving? TSU citation data shows 20 to 30-year-olds and younger.

"It’s young people," Chief Norman said. "I think that’s the right way to categorize who needs the most communication, the most assistance the most reminders and also unfortunately the accountability.”

MPD worked with the Fire and Police Commission to send a message. The civilian oversight body just approved a policy change that allows officers to tow unregistered vehicles involved in reckless driving.

But Norman said curbing this problem will take information sharing and partnerships.

“It’s more than just law enforcement. Not going to arrest your way out," he said. "You’re not going to cite your way out. But it’s a combination of working with so many different partners so we have an all hands on deck and a multifaceted approach.”

Stolen cars are also an issue on the department's radar. There were almost 10,500 motor vehicle thefts last year, an increase of 132% since 2020.

As of early March, MPD numbers show more cars have been stolen in 2022 than this time last year. Some of those suspects are 16 and younger.

"There is an impulsiveness and lack of respect and fear that’s in our youth today, and it is disturbing," Norman said.

Homicides are another disturbing crime trend in the city. Milwaukee numbers broke records in 2020 and 2021. As of early February, a year to date comparison by MPD shows homicides are already up 86% from last year.

The numbers show arguments and fights are big drivers in both homicides and nonfatal shootings.

Chief Norman said he’s committed to impacting those numbers and believes this type of violent crime can be prevented if the right systems are in place with community partners.

“Impulsive behaviors, reckless behaviors, dangerous behaviors,” he said. “That’s where we can start using that data and say, ‘Hey, you’re engaged with kids. What are you seeing? What are you having as a dialogue? What can we do to be part of those types of instances?’”

Overall, the chief has a positive outlook and thinks the department has an opportunity to make significant change. “We are building those relationships, having those discussions,” he told us. “We have much more to go but I see hope. I see there’s a direction we’re going. It’s good for all of us. Good for the community, good for the department.”