Saving the Earth means saving our health too, doctors say

MILWAUKEE — Over the past year, we’ve dealt with a global health crisis that has cost millions of lives and thrown our normal world into chaos.

But COVID-19 isn’t the only health crisis brewing, said Dr. Andrew Lewandowski, a pediatrician based in Madison. Long after we get to herd immunity, we will have to reckon with the effects of climate change — a force that he said will not only affect the natural world but also take a big toll on human health.

“Thinking about how much of an issue climate change currently is, and is going to be,” Lewandowski said, “climate change is sort of the final exam. And it makes the pandemic look like a quiz.”


Lewandowski is one of many providers who are sounding the alarm about how the changing climate is a crisis not just for trees or polar bears, but also for humans all across the world.

He’s involved with groups like Wisconsin Health Professionals for Climate Action — which tries to get across the message that “the climate crisis is a public health emergency,” said Dr. Chirantan Mukhopadhyay, an ophthalmologist in Milwaukee and the group’s founder.

The impacts of the environment on people’s health can be “sneaky,” Lewandowski said. Climate change on its own isn’t a disease you can diagnose. And yet, its effects are already taking a toll on us, even if we have a hard time recognizing the link, he said.

Human health in a changing climate

There are a whole slew of ways the changing climate can hurt Wisconsinites’ health, Mukhopadhyay said.

“Climate change is a global problem with local impacts,” he said.

The Midwest has been heating up in recent decades. And the trend is expected to continue: Researchers from the Wisconsin Initiative on Climate Change Impacts predicted that the state’s average annual temperature would rise by 4 to 9 degrees Fahrenheit by the middle of the century.

Extreme heat is already the leading cause of weather-related deaths in Wisconsin, and more intensely hot days in the future could push those numbers even higher, as researchers pointed out in a report last year.

The warmer, wetter conditions are a welcome sight for some species: The ticks and mosquitoes that are becoming more widespread across the state. An increase in these pesky populations could mean more cases of vector-borne diseases, like Lyme disease and West Nile virus, for the humans who get bit, as the report points out.

Harmful algal blooms also thrive in higher water temperatures, posing a danger to humans and especially to their pets.

But climate change isn’t just about warming. All sorts of extreme weather events — from floods to freezes to fires — are primed to become more common as the climate destabilizes, in an overall move toward “global weirding.” 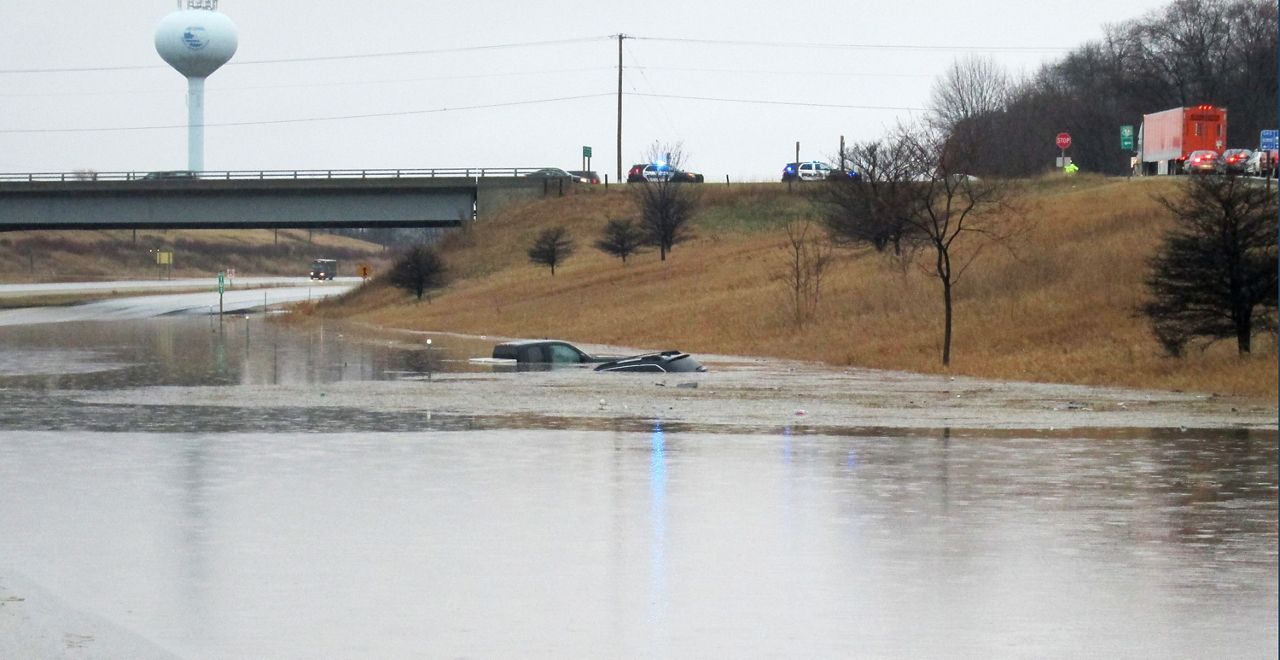 These types of natural disasters can, of course, have immediate impacts, like a flood causing people to drown or get injured, Lewandowski said. They can also have chronic health effects, like mold growth leading to asthma or another chronic condition.

And, even further down the line, extreme weather events can disrupt the big-picture factors that people need to stay healthy.

“There are a number of other health effects from social determinants of health,” Lewandowski said. “So financial loss; homelessness; loss of public health infrastructure like clinics, hospitals, grocery stores or sanitation facilities.”

As climate change progresses, it can lead to food insecurity as agriculture gets disrupted, or push climate migrants out of homes that become unlivable, Lewandowski said. The mental health effects of all this disruption also can’t be ignored, Mukhopadhyay said; he himself described feeling a lot of “eco-anxiety” when thinking about the loss of the natural environment.

And even as climate change will affect people all across the globe, some people will bear more of its burden, Mukhopadhyay added.

“Some parts of the world do have a disproportionate impact,” he said. “In America, we’re feeling those impacts more specifically in communities of color, marginalized and vulnerable populations, children and the elderly.”

Why doctors are speaking up

Though he has long been interested in climate change, Mukhopadhyay said he used to think of it as “something far off in the future.”

A couple of years ago, though, two things happened that drove the impacts home: Mukhopadhyay’s second child was born, and the U.S. withdrew from the Paris climate agreement. That’s when he started thinking more seriously about the kind of planet we’d be handing down to future generations — and what he could do about it.

Mukhopadhay said he sees awareness of the links between climate and health as “still low, but rapidly increasing.”

Part of the work of Wisconsin Health Professionals for Climate Action — which he founded in 2019, and which has grown to include around 350 members — has been to get more people to understand those links, and in turn push for climate solutions.

“Scientists have been telling us for years that there’s no time to waste,” Mukhopadhyay said. “And we keep wasting time.” 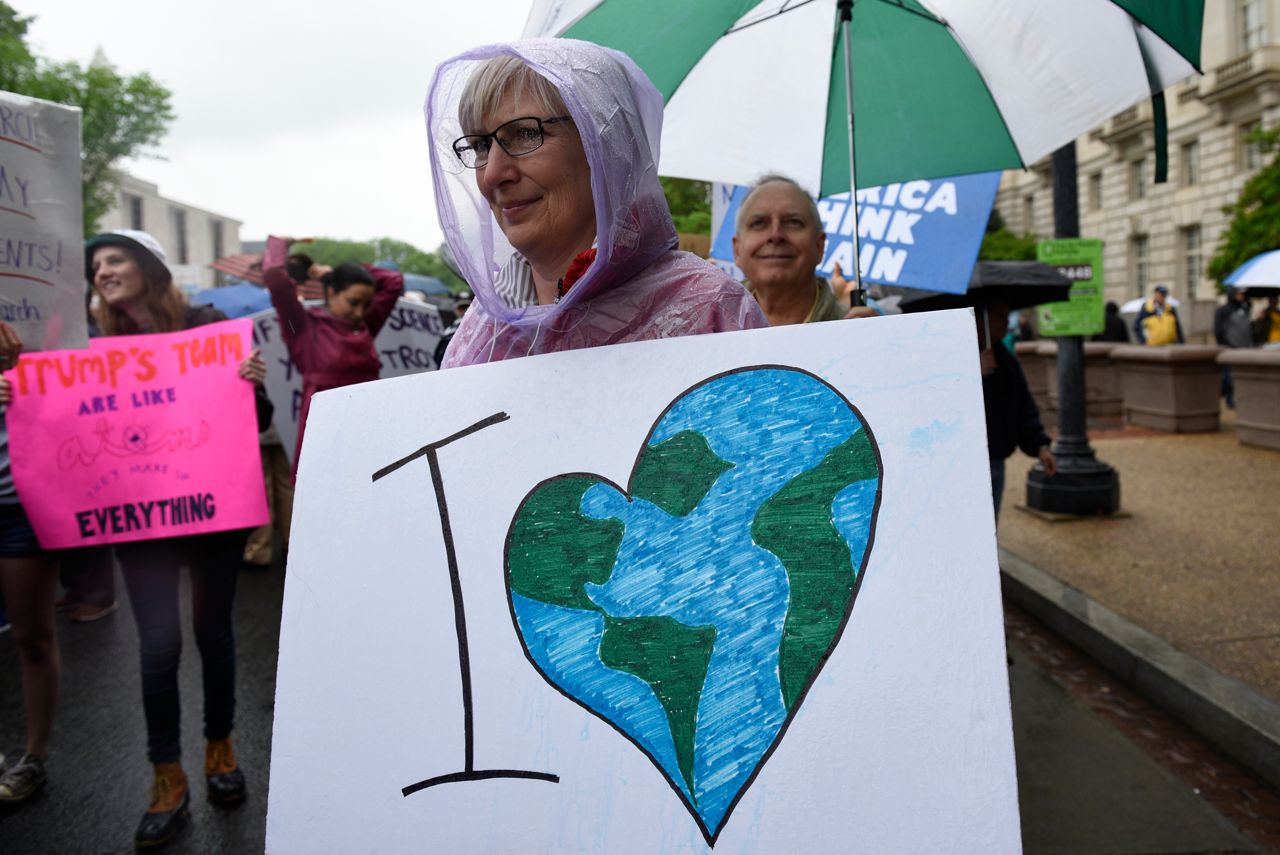 A woman carries a sign during the March for Science in Washington, April 22, 2017. (AP Photo/Sait Serkan Gurbuz)

In his own practice, Lewandowski said he’s been paying attention to the ways climate change could be accelerating the cases he’s seeing — like a premature birth that could be linked with air pollution, or a child complaining about heat exhaustion during a sports check-up.

He’s started including a quick discussion of climate and its health impacts at all of his well-child visits, telling families something along the lines of: “Just like I want your child to eat these healthy foods and to be in the right car seat in order to improve their health and safety, we know now that it's also important for your child's health to support clean energy initiatives, and to work on changing your own energy use.”

Mukhopadhyay said that after learning about the potential impacts of climate change, it can be easy to fall into a sense of despair about the Earth’s future. For him, he said being a part of a group pushing for change, rather than going at it alone, has helped keep him motivated and engaged instead of feeling hopeless.

When it comes to mitigating the effects of climate change, Lewandowski said it’s a bit of a “choose your own adventure.” People can make choices in their everyday lives, like composting or switching to renewable energy, but bigger-scale changes will be necessary to really transform the future.

Even as we are already feeling the impacts of climate change on human health, the action we take today will determine how bad those impacts become in the future, he said.

“In many ways, we've already missed the deadline. What we're looking for is how to prevent irreparable harm,” Lewandowski said. “If the Arctic ice sheet is gone, you can’t just make a gajillion ice cubes and throw them in the Arctic Ocean.”