Lake Michigan sunset from the R/V Laurentian, July 2011. The 30-year, deep-water temperature dataset overlaying this photo (the "heartbeat of Lake Michigan") reveals a hidden story about how the lake’s deep waters are responding to climate change. (Photo courtesy of NOAA)

The Depths Of Lake Michigan Are Getting Warmer, Researchers Find

MILWAUKEE — From polar bears crowded onto shrinking ice caps, to islands swallowed up by rising seas, there are plenty of ways that climate change is transforming our world.

But for Wisconsinites, there are also impacts much closer to home: Water in Lake Michigan has been steadily getting warmer in recent decades, even deep below the surface, according to a recent study by National Oceanic and Atmospheric Administration researchers.


“The big finding that we pull out in the study is that warming is happening year-round, essentially,” said Eric Anderson, a physical scientist at NOAA’s Great Lakes Environmental Research Laboratory who led the study. “And it’s happening throughout the water column.”

Of course, the idea that Lake Michigan is heating up isn’t new. But while a lot of research has focused on surface temperature, which is easier to measure, Anderson said this study is the first of its kind to use such a thorough dataset of deep-water temperatures — with the help of a very important string.

In 1990, NOAA researchers set up a wire stretching all the way from the very bottom of the lake to a buoy bobbing on the water’s surface. For the past three decades, tiny sensors all along the wire’s 150-meter length have captured temperature measures on an hourly basis. 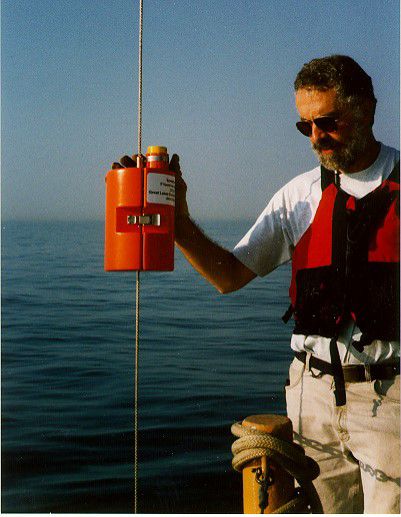 A NOAA GLERL scientist deploys a deep-water temperature mooring in southern Lake Michigan in June of 1990. The mooring has been recording hourly water temperatures up to 150 meters (492 feet) deep nearly continuously ever since. (Photo courtesy of NOAA)

Anderson’s team determined that in the lake’s subsurface waters, temperatures have been rising by an average of 0.06 degrees Celsius per decade. Plus, in terms of the lake’s normal seasonal cycles, winter has been getting shorter while summer has stretched longer and longer.

“Those are some of the big pieces of the story that we didn't have before,” Anderson said.

All of these changes could have a profound impact on the rich ecosystems within the lake — and the people who live on its shores.

Though a fraction of a degree per decade might sound small, limnologist Madeline Magee, who was not involved with the study, said she was actually surprised by the size of the change.

“It doesn't seem like a high number, but when you think about how large Lake Michigan is and how much water is in Lake Michigan, that is a lot of extra heat,” said Magee, a monitoring coordinator for the Great Lakes and Mississippi River at the Wisconsin DNR.

We’ve already seen evidence that ice cover on the Great Lakes has been declining in recent decades. With the warming in Lake Michigan’s depths, that trend is likely to continue, the researchers concluded.

Ice cover can actually serve as sort of a shield to protect the coastline from pounding waves, Magee pointed out. So with less ice, storms could cause more erosion and infrastructure damage. Rising water temperatures could also lead to increases in lake-effect snow, which shows up when cold air sweeps over relatively warmer waters.

Plus, the changing conditions are likely to disrupt the complex interactions between the creatures that call the lake home.

“The fish and all the parts of the food web have adapted to the conditions in Lake Michigan that have existed, essentially, in one state for the last several thousand years,” Anderson said. “And now, with warmer conditions in the lake and less ice cover, we’re going through a period of, in comparison, pretty rapid change.”

A lot of fish have pretty specific demands for what temperatures they’re able to live in, pointed out Titus Seilheimer, a fisheries specialist with Wisconsin Sea Grant who was not involved in the study.

Many parts of the life cycle for Lake Michigan’s fish species, from laying eggs to hatching to migrating, depend on temperature cues in the water. But changes in temperature could lead to potential mismatches between different parts of the food web — for example, if a whitefish gets the signal to hatch before its favorite foods get replenished in the ecosystem.

“All of a sudden, you’ve used your yolk sac up, you’re looking for little zooplankton to eat, and that food source isn’t there,” Seilheimer said. “So that becomes sort of a concern for a lot of species.”

These graphs show long-term records of water temperature in southern Lake Michigan, both on the lake’s surface (top) and 110 meters or 361 feet deep (bottom). (Courtesy of NOAA GLERL)

With so many different pieces interacting, it’s hard to say for sure how the lake’s ecosystems would change: “It's sort of these trade-offs, with a lot of uncertainty thrown into the mix,” Seilheimer said. But there are lots of possible transformations.

Seilheimer explained that warmer water could spark a faster metabolism in fish like lake trout — which could grow bigger if there’s enough prey available, or go hungry if there isn’t. Less ice cover could mean rougher waters for whitefish eggs, which usually “hang out” at the bottom of the lake for the winter before hatching in the spring. Invasive species could gain ground against native species; cold-water fish could swim deeper in search of chilly temperatures, making them harder to catch.

And, as the study points out, even bigger shifts could be on the horizon.

Lake Michigan is currently classified as a dimictic lake, which means it mixes from top to bottom two times a year, Anderson explained. The lake’s layers separate in the summer and the winter, when the temperatures are very different at the top and the bottom, but mix together in the fall and spring as the temperatures become more similar.

The researchers project that with the fall mix moving later, and the spring mix moving earlier, the two events could eventually collapse into just one overturn for the year. 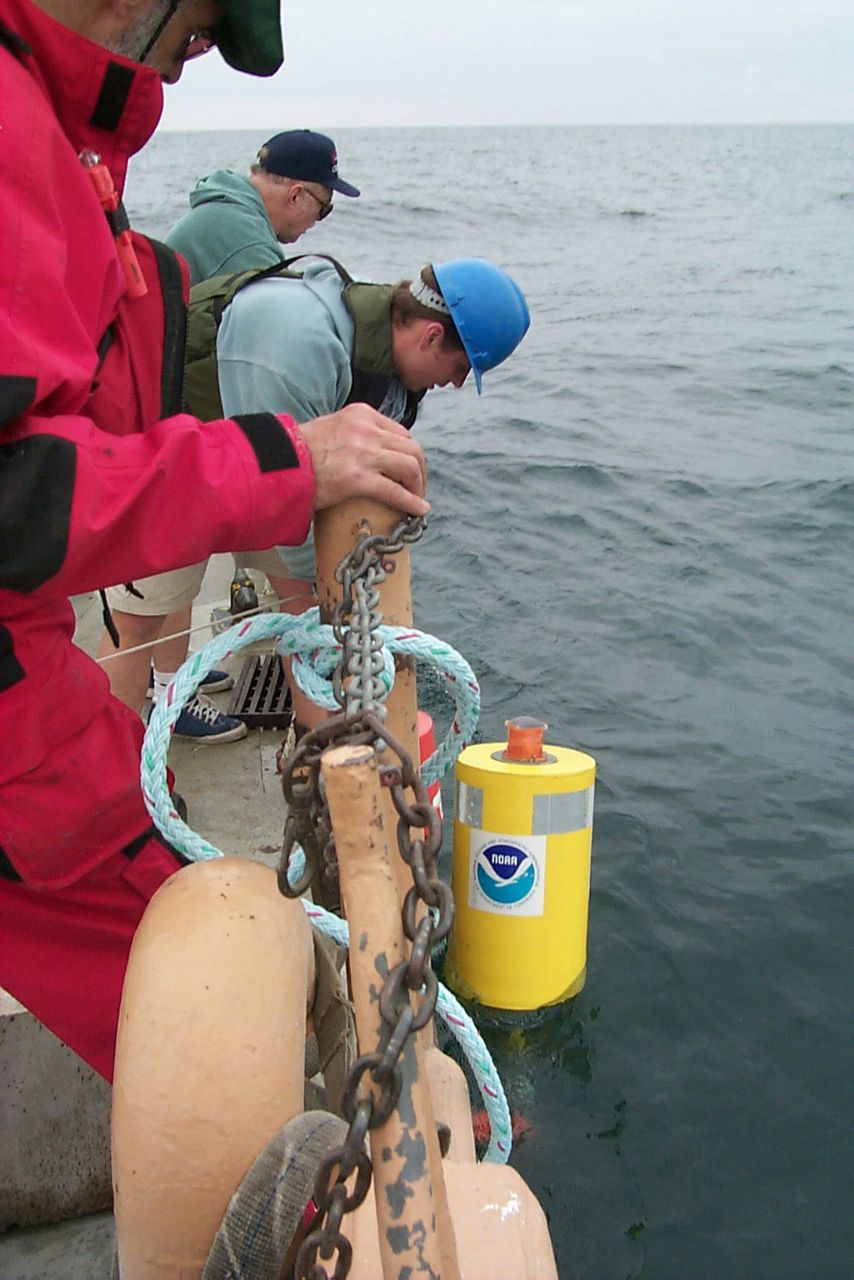 But mixing events are important for moving oxygen and nutrients around between the lake’s layers, Magee said. So a shift to just one mixing period could mean more huge changes in the biology of the lake, like less dissolved oxygen available for the fish in deeper waters.

Of course, there's still a lot left to learn about how lakes are changing, and 30 years of data from one lake don't tell the whole story. Subsurface monitoring has now expanded to Lake Huron and Lake Superior, Anderson said, with goals to add more stations in the Great Lakes.

Not only can large lakes give us clues to broader climate trends, he said, but they also hold most of our available freshwater, run massive economies, and generally have huge impacts on communities around the world.

“We look out to space for signs of things just like this — fresh water on some other planet or moon,” Anderson said. “And here's this massive freshwater system sitting right in front of us that, in some ways, there's a lot of things we don't know about it.”

Wisconsin is, in its way, a “coastal state,” Seilheimer said. Even though it may be easy to take Lake Michigan for granted, the lake plays a huge role in the economy, culture, and people of the Badger State, he said.

Continuing to dig into how Lake Michigan is changing, and figuring out how to soften the blows of climate change, will be key to the future of Wisconsin and beyond, the scientists agreed.

“As much as people, for example, care about polar bears,” Magee said, “when we see climate change is happening in far-off places, it doesn't have the same personal impact to us as when it's a lake that we live on.”​