Now, unlike the movie, this story is not about Joe finding his parents. But Joe Dirt, Jill Dirt, and their thousands of Dirt brethren across the globe are looking for ways to maybe save your parents, your aunts and uncles, sons and daughters, brothers and sisters, by getting the dirt on – you guessed it – dirt.

“I would say after doing this and being immersed and passionate about public health for 36 years, without any degree of uncertainty, that you could never overestimate what a program like this means and can do, especially now,’’ said Dr. Brian Merkel, a professor of biology and immunology at UW-Green Bay. 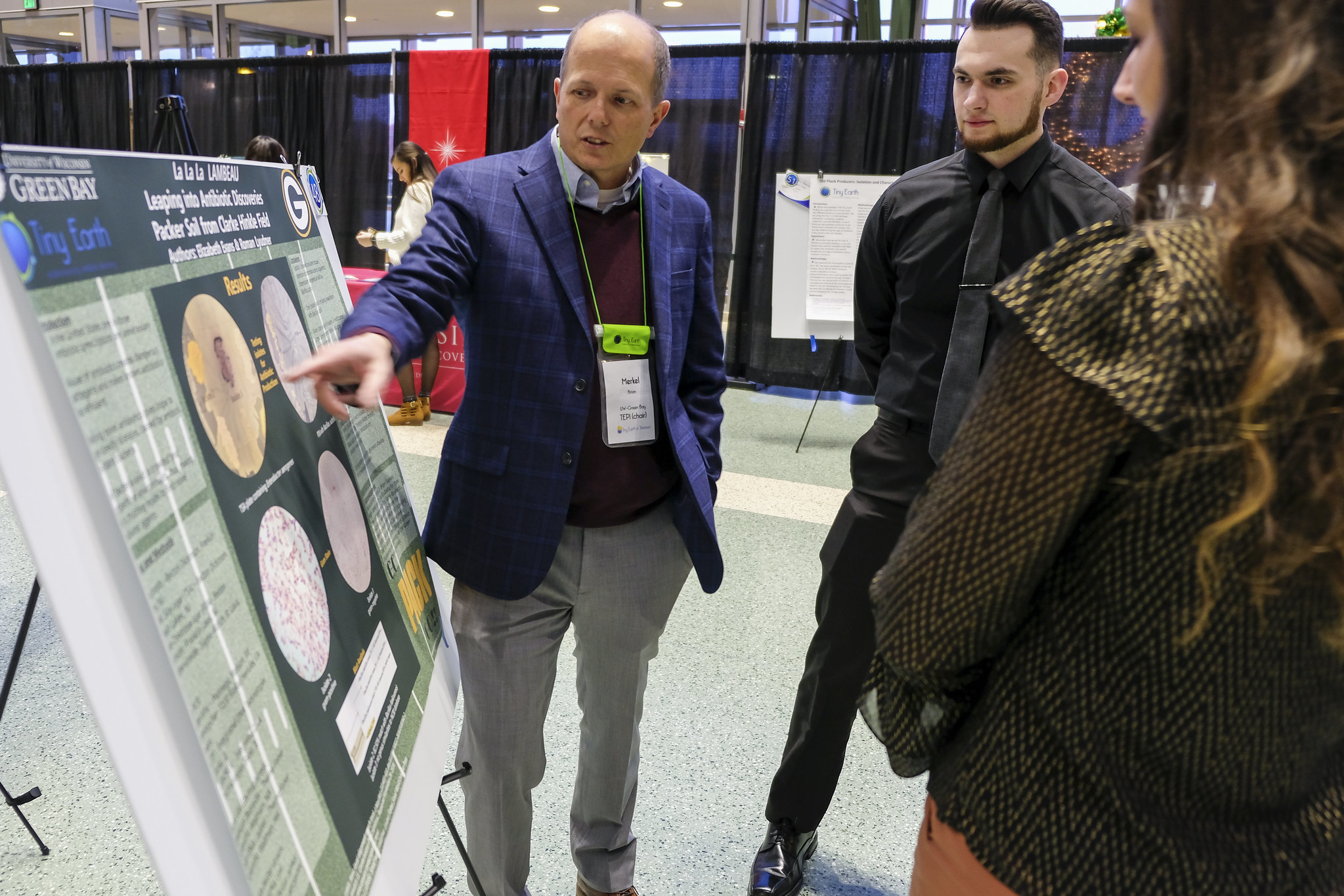 The program Merkel refers to is Tiny Earth, an initiative with a vitally important world view.

It’s a three-year-old program where students and faculty from 47 states and 27 countries – some 10,000 participants in all – are mining the soil under your feet to look for bacteria that produce antibiotics that the world desperately needs right now.

Their talents and findings will be on display on Dec. 14 and 15, when the Tiny Earth Winter Symposium will be held. The virtual event is free and open to the public with a Zoom registration.

The crib notes version of how we got here goes like this: we are facing a possible worldwide health threat because of a diminishing supply of effective antibiotics. We are in this position because we have been poor stewards when it comes to antibiotic resistance. Biotech and big pharma companies have drastically scaled back on looking for new antibiotics because they can make more money doing other things, and it has led to an all-time low rate of new discovery. Tiny Earth was created, in part, to fill that gap but more importantly spur students to develop a passion for science with the hope they become scientists, who have the potential to make a global impact on our health.

This has led to what are known as “superbugs,” bacteria that are highly resistant to antibiotics to the point where many antibiotics have become ineffective. This has not been strictly a human problem, as the introduction of antibiotics into the care of livestock and farm animals has also led us to this point.

This Tiny Earth program has led to a new style of learning, which students have enjoyed more than free textbooks.

“It’s amazing to me, I’ve been teaching for decades now, and the old model has been these demonstration activities, these canned laboratory activities; here’s this, this is how it works, in a vacuum, and it’s already created perfectly under optimal circumstances. And then we move on to the next thing as we go from week to week. 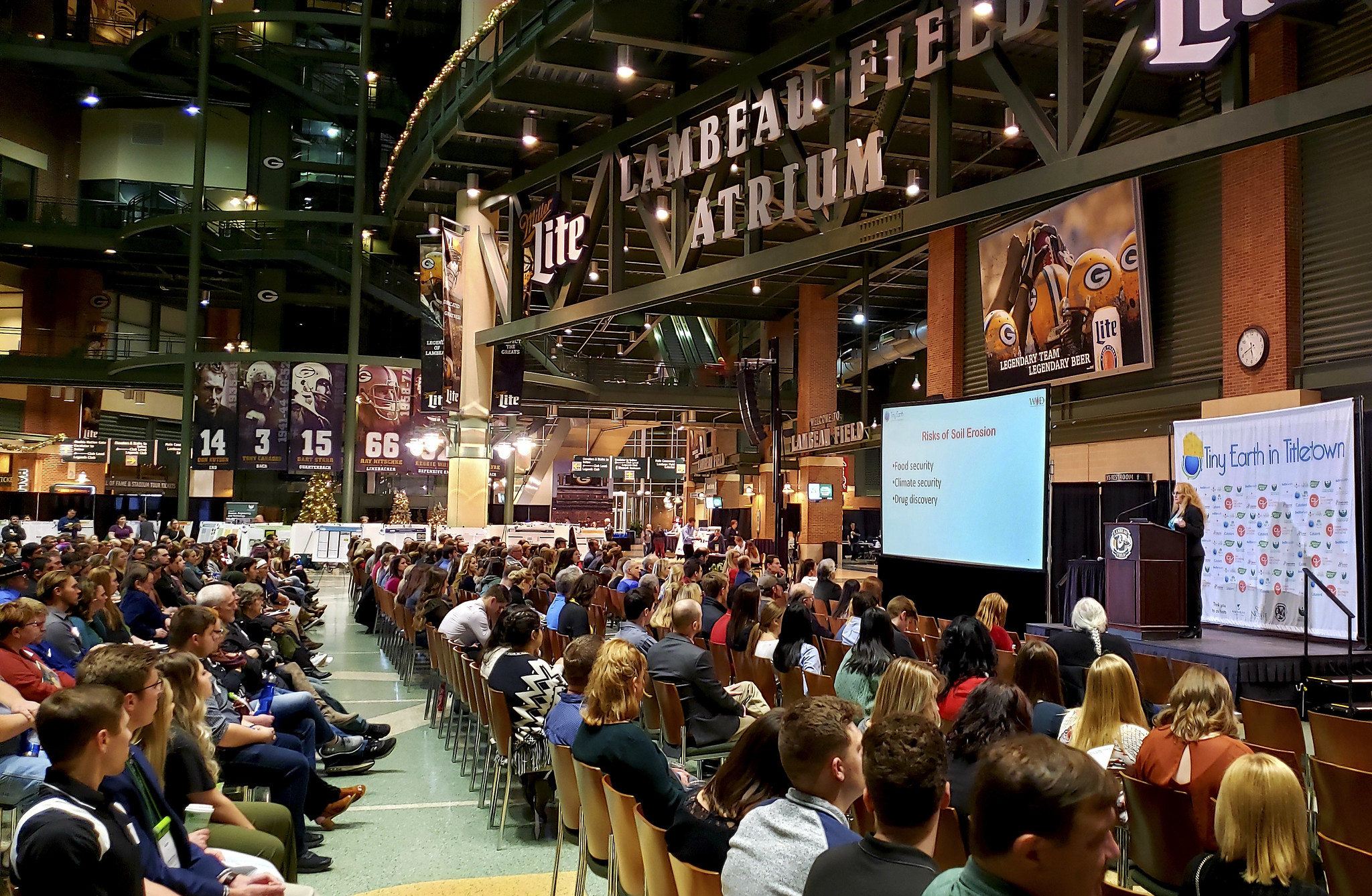 “What this does is actually treat students like scientists. They go through the scientific process. They are the researchers, learn all these amazing techniques, which are absolutely crucial over a 14-week college experience in a lab.”

But it’s bigger than that. Because the program is a worldwide collaborative effort, it helps them understand the importance of sharing ideas, techniques, and information with a variety of similar-minded people from all over the world.

“There is something, too, about being part of something that is so much larger than yourself for these students, and they get it,’’ said Merkel. “In my experience, they find it incredibly inspiring that they know they are doing something highly relevant, highly important and, moreover, the fact they are part of a team, an international team; it’s really awe-inspiring to them.”

Carolyn LaTour, a senior from Kewaunee, said the idea of having an opportunity to make real-world contributions in the midst of a college setting was something she couldn’t pass up.

“Anyone that is going into the medical field, as a student, that is something that is obviously very rewarding and that we can contribute, as students, to the antibiotic crisis,’’ said LaTour, who hopes to become a physician’s assistant.

“When you have your own soil sample and you do have isolates that produce antibiotics, it’s amazing. It’s cool to see that you went out, collected the soil samples ourselves, and to be successful running our own diagnostic tests, gene sequencing, and it’s great to know what we as students can contribute so much into something that we initially did ourselves.”

UWGB’s participation in the Tiny Earth program caught the attention of Microsoft, which awarded it an Al for Earth grant. That has expanded the value of this globally collaborative project while at the same time making the world a little smaller.

“They came along and said, ‘We’ve heard what you’re doing with this Tiny Earth thing,’’’ said Merkel, 'And it seems to me if you had some cutting-edge technology software, maybe you create soil maps, and could come up with predictive techniques that could help you fine-tune your fishing expedition a little bit. That we can determine, based on your preliminary data, that if you go here based on GPS coordinates and based on what we know so far, you’ll likely find these kinds of antibiotics or those kinds of antibiotics.’ So that kind of work is going on right now at UW-Green Bay.”

Being part of the Tiny Earth project, along with the Microsoft connection, has also led to the opening of hundreds of doors that were previously locked.

“What makes (Tiny Earth) a brilliant organization, it is completely and entirely and wholly about collaboration for the greater good,’’ said Merkel. “So for me, someone who is working at UW-Green Bay, ‘Oh, you’re doing this? You have this connection with Microsoft? Absolutely, have access to the international database that we have created. Look at all the data and see what you can find.’

“And I’ll tell you, after being a Ph.D. and scientist for all these decades now that is not always the case. It’s, ‘Hey, this is our stuff. Go find your own elsewhere.’ I think that is an important piece as to why this organization is as successful as it is.”

Merkel said his Tiny Earth classes fill quickly during registration. He said the class has already proven to be a helpful tool in his students getting accepted to medical school. The soft skills learned – written and oral communication, the ability to interact, to show empathy – are all vital to not only the program’s success but to the student’s growth.

“It lights a spark for students to continue on as scientists,’’ Merkel said. “Can you simulate and train a Ph.D. experience in a 14-week course? Of course not. You can’t. But that’s not the point. The point of this course is to get them excited to continue on. So we see that. It does that.

“But it does all these other things to -- that in order to challenge big problems, it requires groups of people collaborating, working together for the greater good.”

Merkel admits he thought his career would be winding down about now. He figured he soon would be spending more time digging through dirt, in search of worms to foster his affinity for fishing.

But dirt has taken on a whole new meaning in his life now. 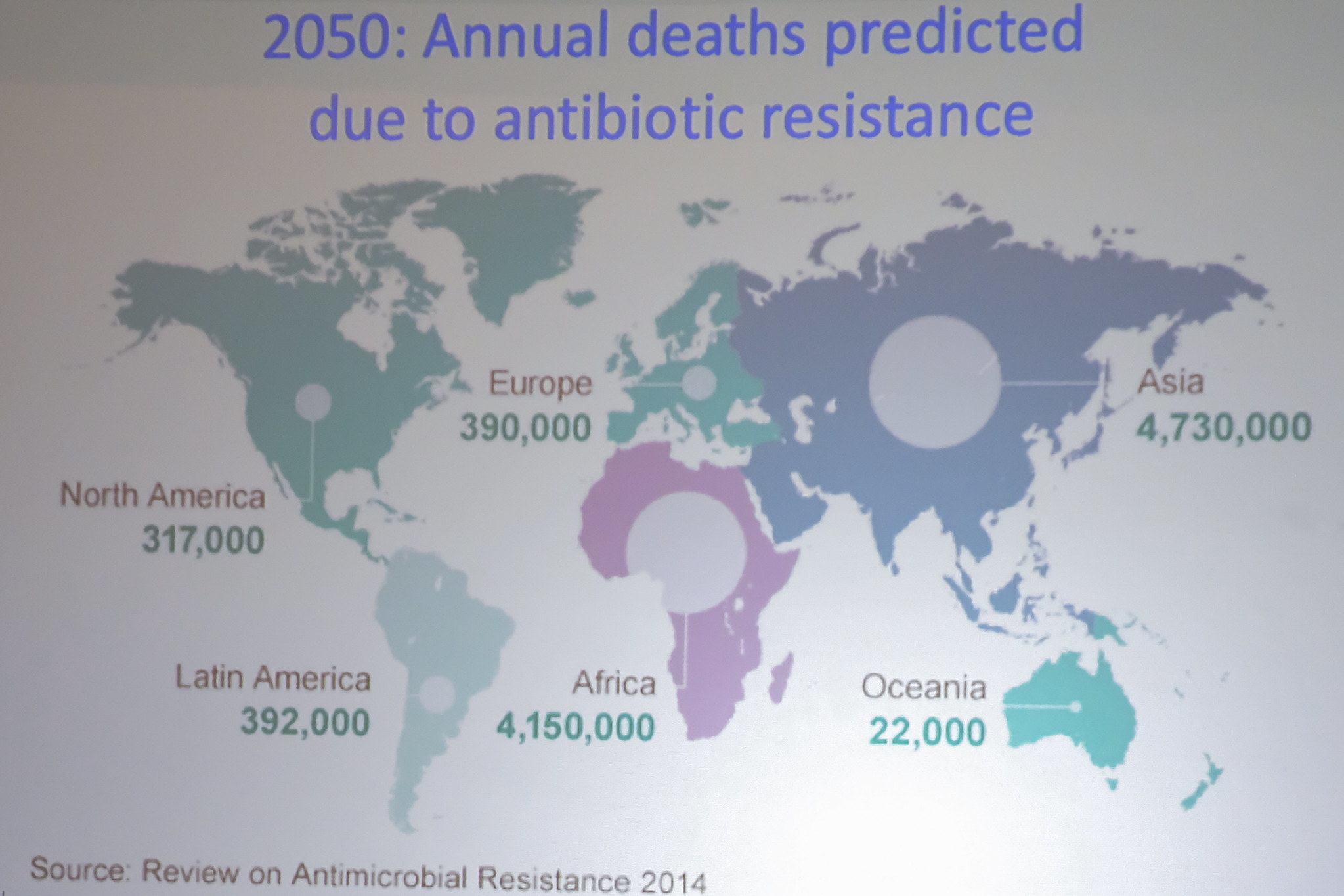 
“I’ve never been more excited in my career doing this,’’ he said.

“Tiny Earth, in my opinion, has not reached its potential in terms of world impact because you’re talking about 27 countries and growing. All of those people, and what it could mean; I’m so excited about seeing where all that goes to.’’

It may be the best, and most important, dirty job on the market.