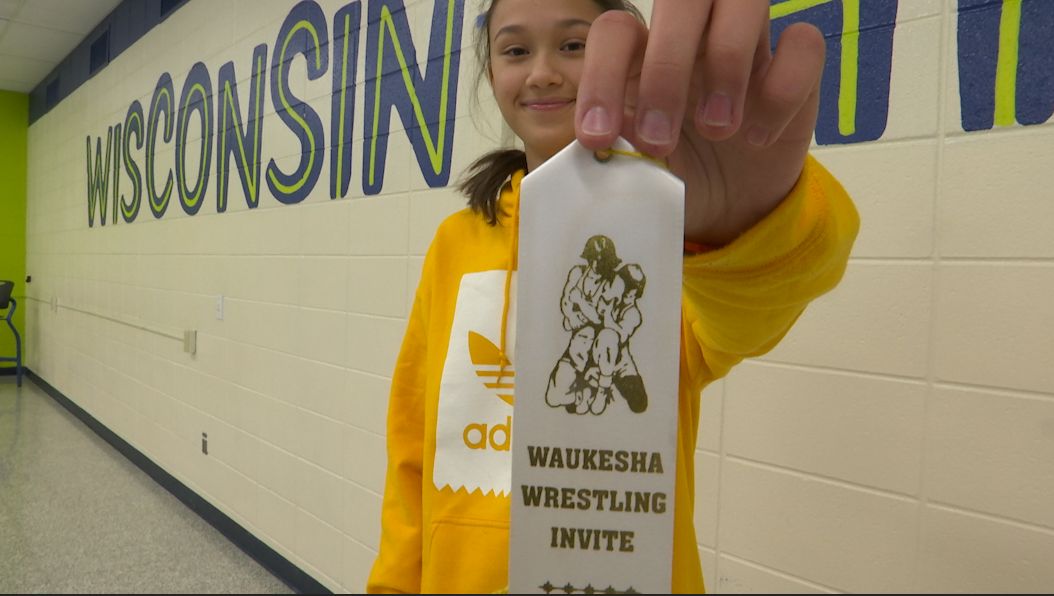 BROOKFIELD, Wisc.-- A Brookfield middle school wrestler is hoping to inspire girls across the state to shoot for the stars and for the legs.

At first glance Gracie Shaikh looks like your average 12-year-old girl. But if you take a closer look she's a force to be reckoned with.

Gracie is a 7th grader at Wisconsin Hills Middle School and she has a passion for wrestling. Yes, you heard that right… wrestling.

"I feel like I'm underestimated sometimes because I'm a girl doing wrestling when it's mostly a guy sport," Gracie said.

However, anyone that doubts Gracie, is only motivating her.  She says she’s here to prove them wrong.

"Someone went out laughing and smiling, and then I ended up pinning them," Gracie said.

This girl has no problem raking in the hardware either; she has a neck full to show just how talented she really is. Gracie says she’s been working hard to see herself move up the podium, and strives to be number one.

However, Gracie hasn't always been an outgoing and confident girl.

"It's been great to see that side of a shy girl, never expecting to see her been that ultra-competitive," Gracie’s Dad, Omar Shaikh said.

For Gracie, the sport has become a launch pad to get her out of her shell and turn her into the stong and confident young lady she aspires to be.

"I used to not have that much confidence, but since wrestling I've gotten stronger and I think that just my mindset has also gotten better," Gracie said.

That boost in confidence is thanks to the wrestling program at Wisconsin Hills that's fostered the idea of allowing girls the same opportunity as the boys.

"We have more girls than any other middle school team in the area," Wisconsin Hills Middle School Wrestling Coach, Huel Sanders said.

The program has been welcoming girls with open arms for nearly a decade and continues to break all types of barriers.

Meanwhile, for head coach, Huel Sanders watching a kid like Gracie grow is what it's truly all about.

"She never gives up and that's what I really love about her and she's just a great sport," Sanders said.

Gracie says she wouldn't be where she is today without the support of her teammates and her family. Her father says he is one proud dad.

“I've never won a lottery but it honestly feels to me and my wife… Better than the lottery," Shaikh said.

Now to all the girls out there who've ever thought 'I Can’t'… Gracie has a message for you.

"Don’t give up even if it's a sport mostly with guys, always try your hardest and maybe try to prove people wrong," Gracie said.

She says her goal is to make it to state this year and place.