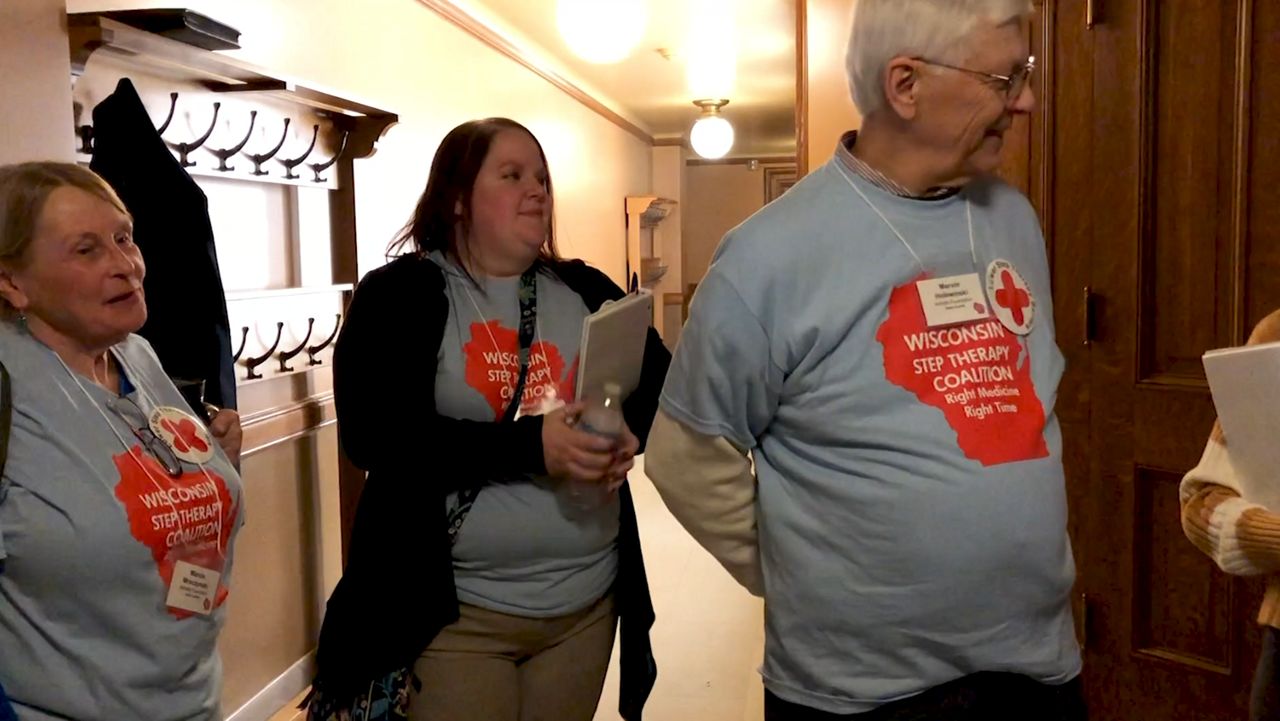 Step therapy is an insurer practice that forces patients to try-and-fail first on insurer chosen drugs before doctor prescribed medications will be covered.

Right now, a bill is being proposed that would create exceptions in the process so patients can get direct access to their doctor prescribed medications.

Stephanie Block from Middleton was among those in the Wisconsin Step Therapy Coalition sharing their experiences with lawmakers. She says she has been 'stepped on' twice in her life.

“When I was eight years old, I was diagnosed with juvenile rheumatoid arthritis, and growing up with that I've also developed Uveitis in both of my eyes and Crohn's disease,” Block said.

Block felt the step therapy delay as a teen, taking drugs that made her violently ill and irritable.

As an adult, another insurance company forced Block off a medication that was working and had her disease under control.

“Insurance company came back and said 'No you need to try this, this and this and fail first,' Block explained. “Eventually, I ended up in the hospital because the medication that they wanted me to take was actually making me sicker each time that I took it.”

It was only after being hospitalized that Block got the drug she needed and felt normal again.

“Why spend all this extra money on hospital bills and other medications when the doctor says this is the medication I want you to take,” Block said.

Dr. Lisa Arkin is a pediatric dermatologist in Madison. She says the bill is important because not all patients are the same and not all diseases behave in the same way.

“If the doctor thinks the drug is unlikely to work, or might actually cause more harm, you're probably going to get there anyway, and then you will have increased health care costs by adding doctor's visits and potentially creating other problems you wouldn't have had in the first place,” Arkin said.

The proposed bill would not ban step therapy. It would just limit delays on getting the right medication for patients at the right time.

“We don't want individuals who are stable on a drug, right now, to have to go through all sorts of hoops to try other drugs in order to meet cost goals,” said State Sen. Alberta Darling (R-River Hills), one of the bill's authors.

Patients like Block just hope they never have to go through steps again that can take weeks or even months.

“We're not asking for much,” Block said. “We're just asking for our medications to be given to us, to give them a timeline to say yes or no, just so that we can get back to feeling better.”

Similar legislation has been passed in 21 states, including Minnesota and Iowa, according to the coalition.

The bill would not limit the number of steps an insurer can impose, nor would it make insurers prioritize prescribing brand name drugs over generics.

Instead, it would offer an appeals process and provide guidelines for when a patient and health care provider could override a health plan's step therapy protocol.

A committee hearing regarding the legislation is expected to be held sometime later in March.