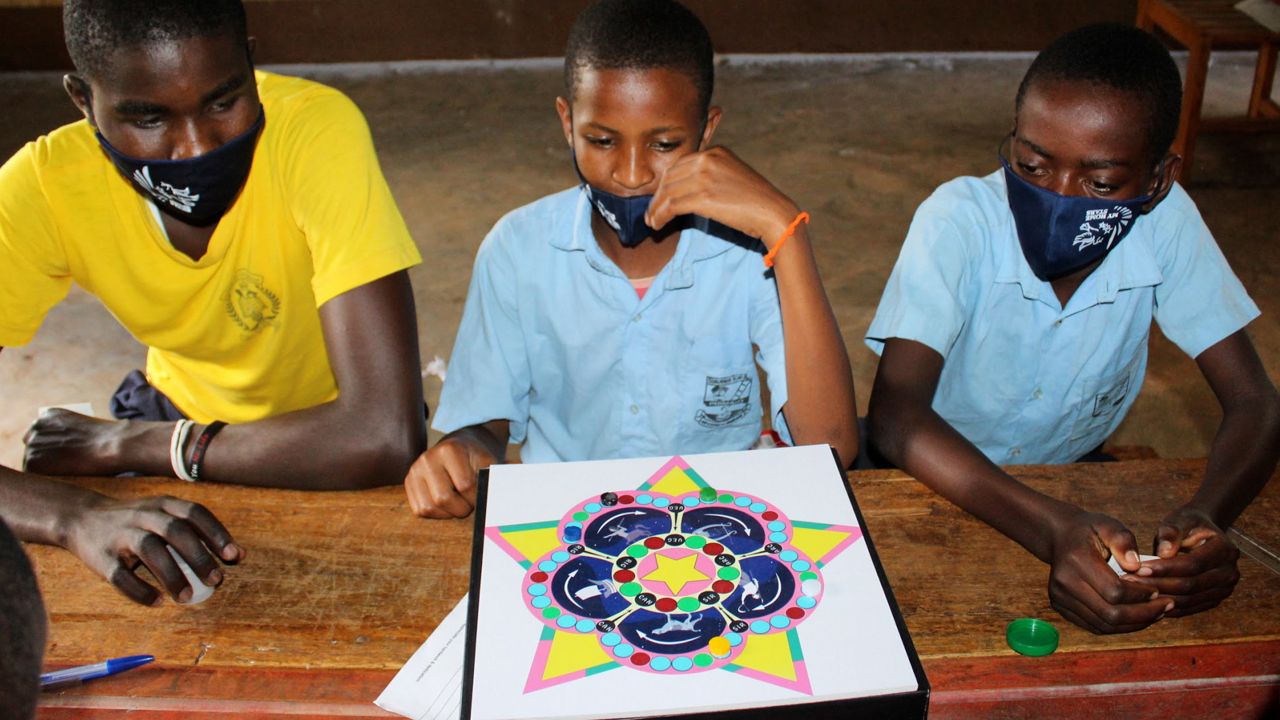 MADISON, Wis.— Growing up in a refugee camp in Uganda, Joel Baraka remembers sitting in class and listening to his lectures, but always wanting to have fun at the same time.

“I would have made school more engaging, more fun,” Baraka said. “A space where children come and they are themselves you know?”

Baraka is now doing that for kids who sit in the same classrooms now that he did 20 years ago. He's doing so with a board game.

“For me, the game is that thing that is able to bridge that gap,” Baraka said. “Yes we need to have children learning at school, but also let's not forget our children, they are best at playing, they light up when you give them something fun to play on with.”

Baraka is a senior at the University of Wisconsin – Madison studying civil engineering. He grew up in a Ugandan refugee camp with his family after fleeing the civil war in the Democratic Republic of Congo.

He started working on the idea of an educational board game for students like himself in high school.

“It was me thinking about how can I help children back home to be able to have classes that are more engaging, and fun for them,” Baraka said.

In the Summer of 2018, he met Anson Liow in university housing. Liow is in the same program at UW as Baraka — he is also a senior majoring in civil engineering — and he also had experience with refugee camps, volunteer in one in his home country of Malaysia.

Baraka told Liow of the game, and even though Liow also didn't have experience in education or with board games, the two teamed up to develop the game.

“As time goes on I feel like we've been more like partners now,” Liow said. “Like in every decision making in every move that we want to take we will consult each other.” 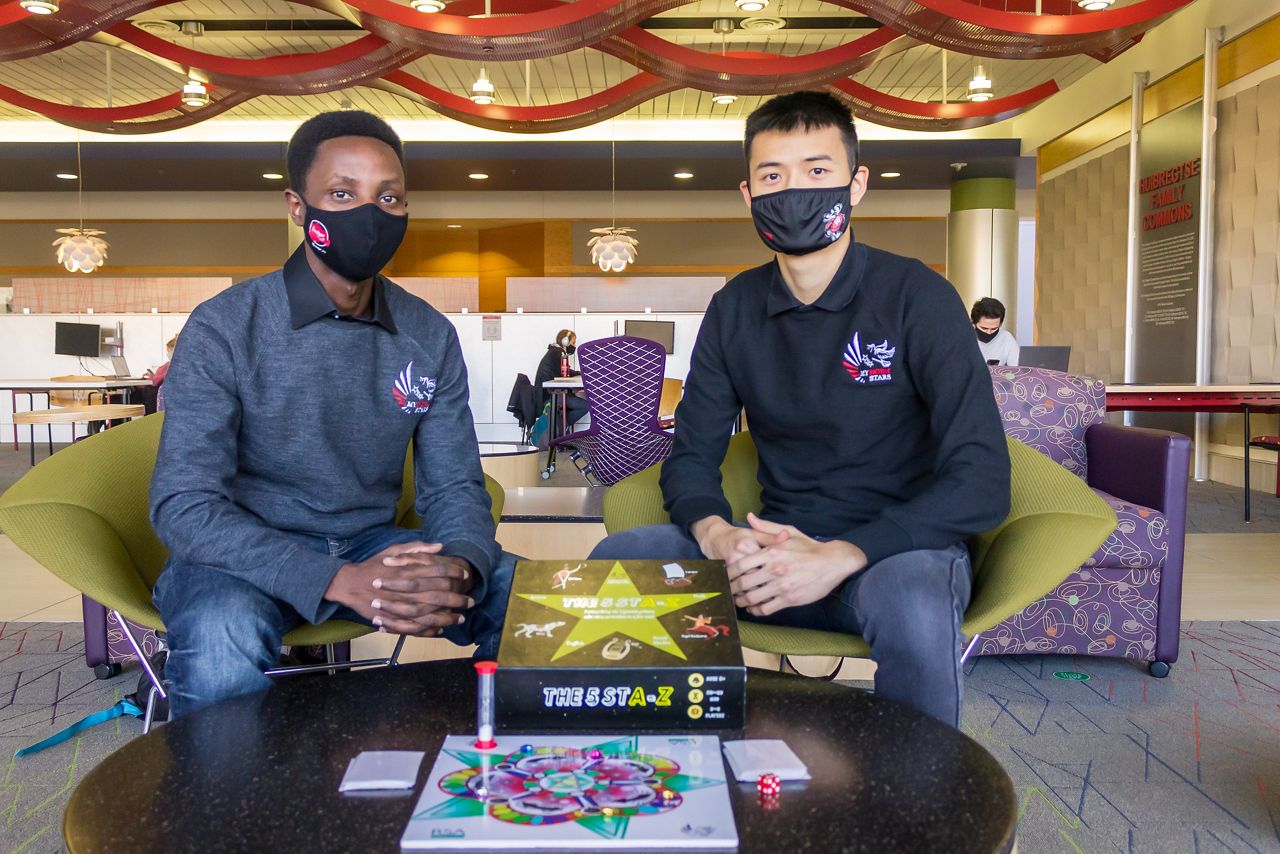 Liow's first project was designing the packaging for the game. The two continued working on the project, applying for grants throughout 2019 to develop it. The grant proposals proved unsuccessful, but the need to create the game became more urgent once the pandemic began.

“When COVID hit everyone around the world, they moved to online learning, with computers and other things,” Baraka said. “Well kids in the refugee camp don't have that. So I was like kids back home are actually going to struggle, they are not going to go to school in any way.”

Baraka heard from former teachers back home about the challenges they were facing with education.

They had the idea to start a GoFundMe, they used Baraka's birthday in August to try and generate donations and ended up raising more than $10,000 within four weeks. In September they started working on producing the games with a Ugandan company.

The money didn't just go to games though. Part of it went to paying salaries for 10 teachers, more of it went towards sanitization and masks for the schools.

“So I would say the GoFundMe money definitely has a greater impact than just the game itself, it's about bringing back students to school and bringing back teachers in a safe environment,” Liow said.

So far they have produced more than 200 games for the same Ugandan refugee camp Baraka grew up in.

The game is called 5 STA-Z (pronounced five stars). Five players move around the board by answering trivia questions on math, science, social studies and English.

“That's all within the Ugandan primary curriculum,” Liow said.

There are also elements of chance and jeopardy in the game, and opportunities for players to quiz each other or ask each other for help.

Partners on the ground in the project have helped distribute the game. They are also helping administer surveys and tests before and after to gauge the effectiveness of the game's educational value and how enjoyable it is with students.

So far the kids seem to be enjoying the game and getting learning opportunities.

“It's touching and it's really meaningful to me on different levels,” Liow said. “Personally I think to be able to be creating a positive impact on communities now means a lot.”

For Baraka, it's the realization of a long-time goal. It's also an opportunity to help kids learn in a way he wishes he had the chance to at a young age.

“For me, the game is that thing that is able to bridge that gap,” Baraka said. “Where yes, we need to have children learning at school, but also let's not forget our children, they are best at playing, they light up when you give them something fun to play on with.”

Baraka and Liow don't have specific long-term goals for the game — after all, at times it's enough for them to balance their studies and the 5 STA-Z projects. However, they would like to get the game to a point where it is financially sustainable, or even profitable. They want to turn profits from the game into funds for more resources for refugee camps. In the meantime, they are taking more donations on GoFundMe to continue producing the game.

“If people feel compelled we would really appreciate more donations and continuing to support us,” Baraka said.

The two also welcome anyone with relevant perspective or advice who feels they can help with the project to reach out to them at baraka@wisc.edu and eliow@wisc.edu.