Scientists say several years in a row of high rain have contributed to the historic rise in water levels.

“One of the main drivers of this rise from record lows to record highs is precipitation, we've had an incredibly wet period in the great lakes basin over the last seven years,” said Adam Bechle, a coastal engineering outreach specialist with the Wisconsin Sea Grant.

Belche said the past five years, in particular, have been extremely wet. Belche said it's the wettest five-year span the Great Lakes Basin has seen in more than 100 years.

With water levels being so high, Lake Michigan is taking bites out of coastal Wisconsin communities.

Two Rivers, Wisconsin is known for a half-mile beach on Lake Michigan.

Buckley said 10 years ago the city council set a goal of making the beach a regional attraction. They invested in a walkway, new grooming equipment, and reconfigured traffic and parking among other improvements. In all the city has spent $500-$600 thousand dollars in the past decade on the beach.

“We're realizing more and more that it's an economic development engine as well bringing both day-trippers and people that are choosing to stay longer into the community,” Buckley said.

The community is also spending on the beach. They raised about $125 thousand for a pavilion for live events on the beach. 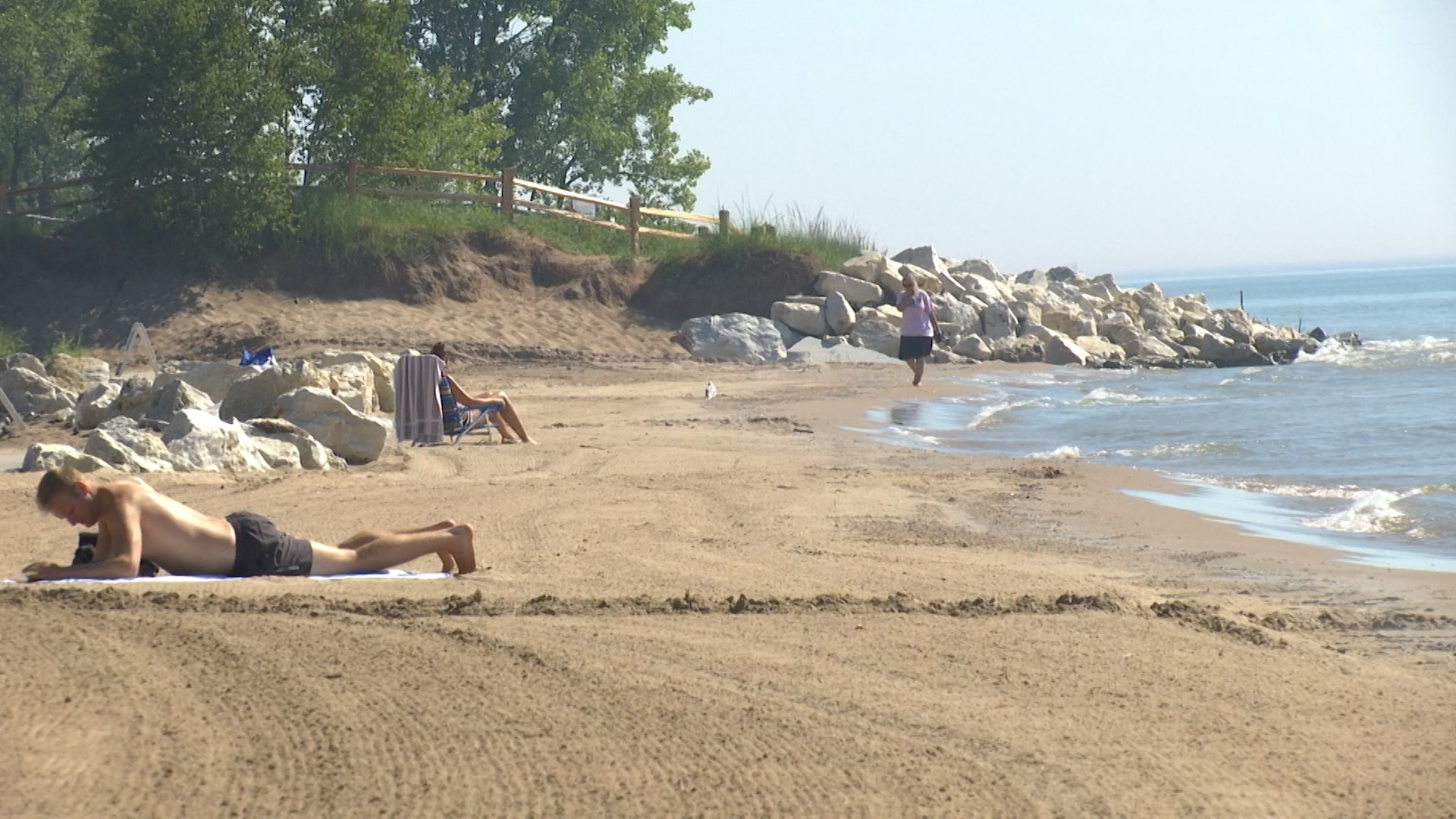 High lake levels have shrunk the beach though. Buckley said about 100 yards along the entire half-mile of the beach are now underwater, cutting the available space for beachgoers.

“The rising lake levels are a concern of course to every shoreline community, we've lost a lot of beach we're lucky enough to still have a fair amount of beach for people to enjoy,” Buckley said.

The Lake isn't just taking land one grain of sand at a time though, oftentimes it's taking land in chunks.

Titus Seilheimer is a Fisheries Specialist at the Wisconsin Sea Grant. His office is in Manitowoc, and just a short walk from it is the lake. Seilheimer has been documenting bluff erosion along the lake and posting updates to it on his Twitter account. 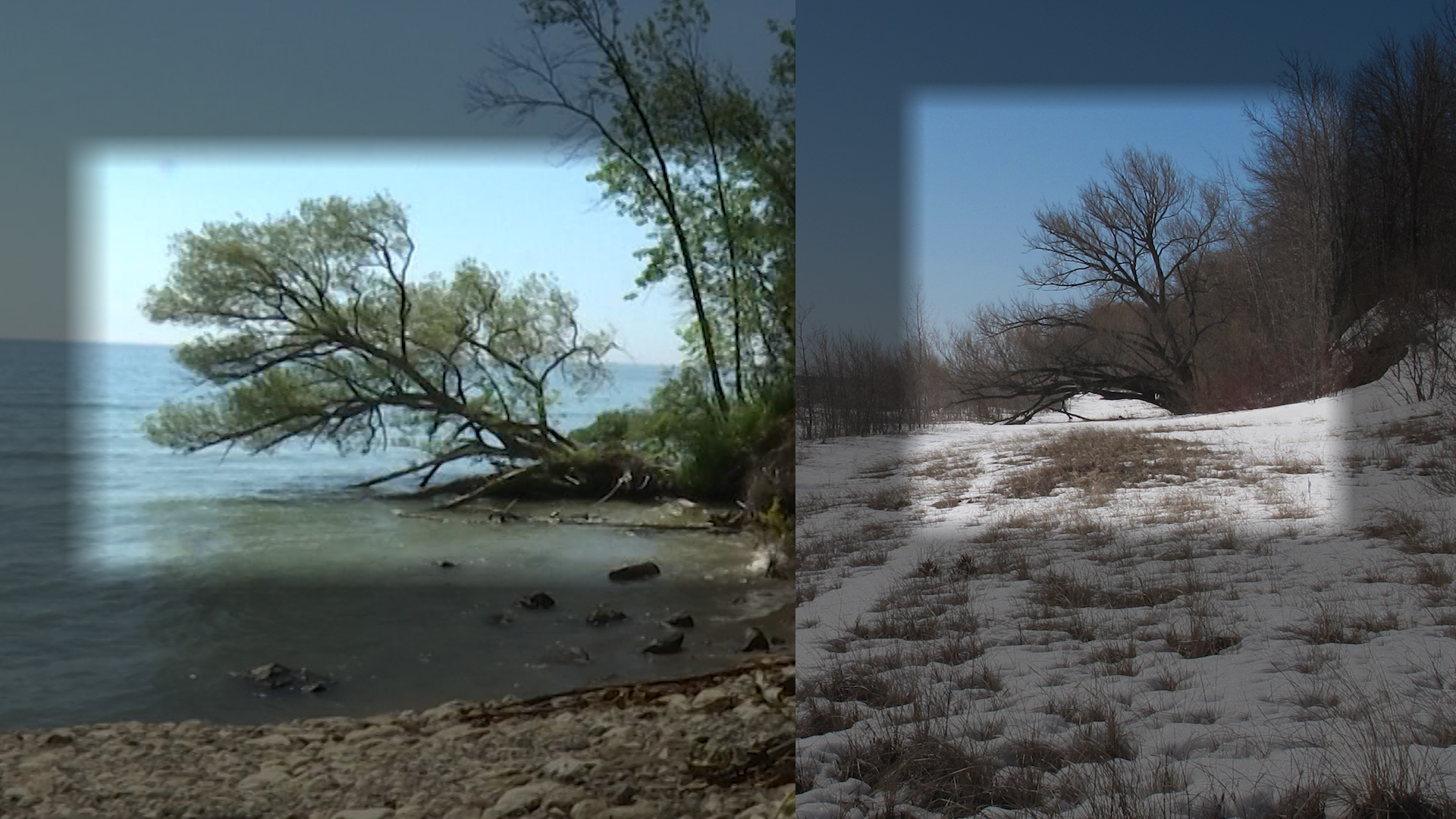 What he's seeing is a receding coast along the bluff. Seilheimer said erosion has been happening quicker this year, taking a few feet with most storms. This year alone he said the bluff has receded about 15 or 20 feet.

“Carving out at the bottom of that bluff, and that's what we've been seeing, pretty significant chunks of that bluff sort of falling, eroding off and falling into the lake and really being washed away,” Seilheimer said.

Erosion like that is happening up and down the coast. Causing varying levels of challenges for coastal communities.

“Certainly we're losing land to the lake, but in terms of the square footage of the state it's a small percentage, but for a coastal property owner, it's quite a big percentage,” Bechle said.

Belche said there are communities where homes are threatened by the erosion. He also says there are municipal infrastructure threatened like coastal roads or things like wastewater plants.

Then there are the storms. Bechle said when the lake is this high, storms can be more damaging. He points to a January storm that caused a lot of damage to the Port of Milwaukee. Higher water levels also increase the frequency of floods for cities on the coast.

It is even making stormwater drainage difficult. Bechle said municipalities are struggling with drainage systems being submerged by the lake and slowing flow.

The question for these coastal communities: should they pay to address and prevent these issues?

“That is the tough challenge because we don't know too much into the future,” Bechle said.

Particularly when in the past decade lake levels have spanned two extremes. This year they are reaching record highs, but in 2013 Lake Michigan set an all-time low.

“It's certainly unprecedented to go from a record low to a record high,” Bechle said.

In the context of the past decade, it's harder to nail down. Bechle said scientists aren't sure right now how climate change is playing a role, but it appears there is a tug of war, and lake levels are the rope.

“It's certainly possible, it's hard to really say definitively whether climate change is causing this,” Bechle said.

The U.S. Army Corps of Engineers is projecting lake levels to fall over the next few months. However, the agency only projects six months to a year out. Long-term lake levels are uncertain.

Great Lake levels typically are cyclical, with high-water years and low-water years. However, with the volatility of levels in the past decade, it's making it difficult to know what to expect next.

“It's certainly not an easy question to answer,” Bechle said.

For communities like Two Rivers, the uncertainty makes it difficult to know what to plan for.

Buckley said the city has spent money this spring fortifying a water quality wetland North of the beach, and securing the beach walk after storms had water spurting out of it.

“If it stays high long-term I think there are going to be some major decisions made about what sort of facilities we have in the zone that used to be just beyond lakes reach,” Buckley said.

Of course, it's a big if. Buckley said back in 2013 they were bracing for historic low water levels to be the new normal. He said the city has some flexibility, they can move a parking lot across the street and make more beach. Whatever the water levels do, Buckley says the Lake is an important resource for the city.

“As a traditionally industrial town that has had some setbacks in that manufacturing employment sector, we're realizing that the natural setting of this community for the long term is one of our great selling points,” Buckley said.

Regardless of what water levels do, erosion happening now is permanent. While the soil being washed away will likely become sand somewhere down the road, the land it once formed won't reform.

“Once the bluff is gone, all the sections here that are eroded away, we're not going to build those back up,” Seilheimer said.

While the coastal communities are dealing with the erratic lake levels now, the entire state benefits from the economic impacts of Lake Michigan.

“It may seem at first glance like just kind of a problem for the people that live on the coast, maybe the cities that are dealing with it, but it is a vital part to the state's economy and our identity as Wisconsin,” Bechle said. “So it really is an issue that affects us all.”