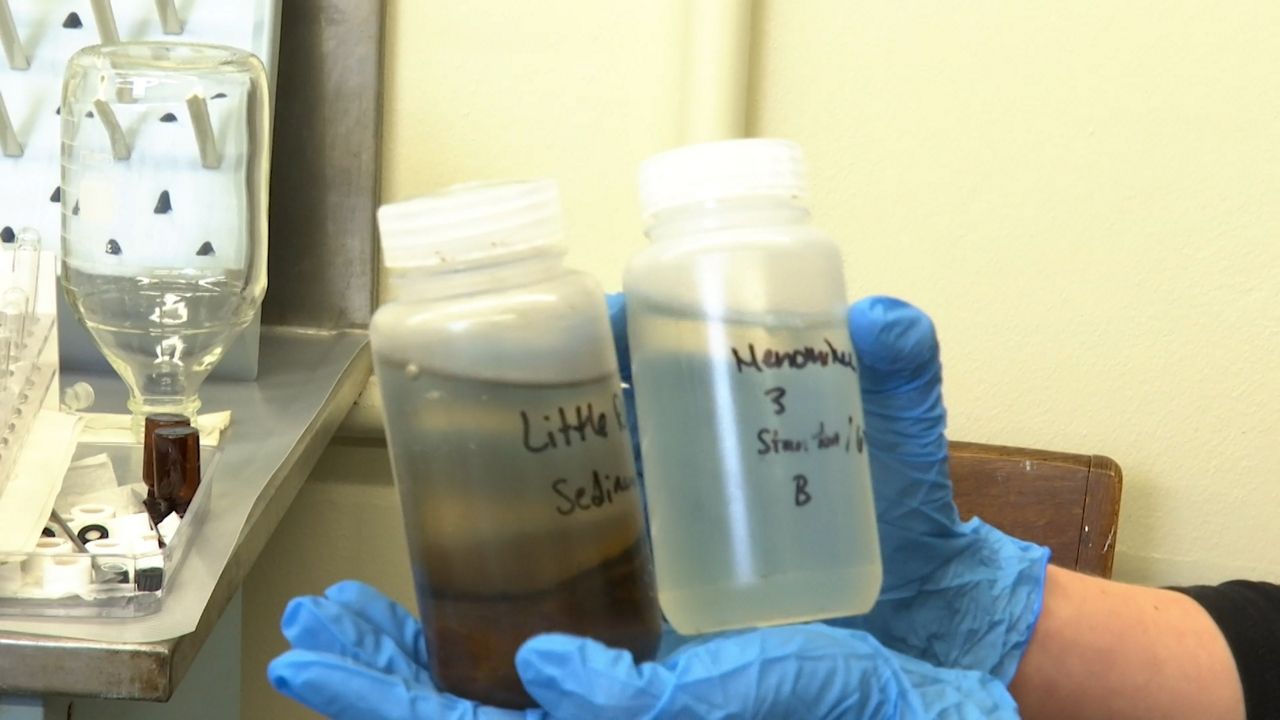 Researchers use Marinette contamination to learn more about PFAS

PESHTIGO, WI (SPECTRUM NEWS) — Mark Stuppnig still doesn't know for sure if his well is contaminated, but he thinks it probably is.

Stuppnig is a Peshtigo, Wisconsin resident. He's been in his house for about 46 years. People in and near Peshtigo and Marinette have been dealing with uncertainty about the cleanliness of their water for a few years now.

The contaminant in the area is a set of manmade chemicals called PFAS. They are used in things like makeup, food wrappers and firefighting foam.

It's the foam that has caused the contamination in the Marinette and Peshtigo area. More specifically from the TYCO Fire Technology Center. The company, now owned by Johnson Controls, has produced or trained with firefighting materials at their facilities in the area since the 60's.

PFAS are often referred to as 'forever chemicals' because they do not quickly or easily break down. They can last in the environment for decades. If consumed they can cause health issues for people like thyroid disease, birth defects, high blood pressure or even cancer.

Christy Remucal, a professor of civil and environmental engineering at UW-Madison has been researching the chemicals for the last few years.

“The chemicals aren't new, I guess our knowledge of how extensive the contamination is is new,” Remucal said.

That's part of Remucal's work, understanding the chemicals and how they move in the environment. One of her studies focuses on the Marinette and Peshtigo areas. Specifically understanding what the contamination there means for surface water.

“Rivers in the area as well as Green Bay and ultimately Lake Michigan,” Remucal said. “Also sediment concentration, so how much of the chemicals stick to the sediment versus stay in the water.”

So far this research in particular is relatively new, and hasn't turned any results. Remucal said her research is seeking to answer just one of hundreds of questions about the chemicals. However, it can help address how to combat them sooner.

“Do we just need to worry about these chemicals in the water or do we need to think about sediment contamination as well?” Remucal said. “Being able to measure that in the field is going to be important for remediation and thinking about how to address that moving forward.”

According to the Wisconsin Department of Natural Resources, high levels of the chemicals have been identified in 45 wells by TYCO tests so far. Earlier this year the WIDNR directed TYCO and Johnson Controls (JCI) to expand further drinking water sampling.

Stuppnig's well hasn't been tested. Though he says he's heard rumors that test wells near his home have come back with high PFAS levels.

When Stuppnig first moved into his house, he decided he didn't like the taste of the water and has been drinking bottled water for the past 40 years. However, that doesn't mean he doesn't worry about what the contamination could have done to him.

“It concerns me about even bathing with the water because you figure if there's PFAS in that water that you're bathing with or brushing your teeth with and stuff it's going to maybe go into your bloodstream,” Stuppnig said.

Researchers at UW-Madison say the concern about PFAS medically comes more from consistently consuming it over a period of time. So if you frequently eat fish with the chemicals in its flesh or drink water with unsafe levels of it.

A lot of people in the area have been drinking their well water. At least before TYCO notified the DNR in the Fall of 2017.

Doug Oitzinger, a former Marinette Mayor and member of a community group advocating for clean water in the area called S.O.H2O, said people are uneasy about what they may have been exposed to.

Two lawmakers from the area — Rep. John Nygren (R-Marinette) and Senator Dave Hansen (D-Green Bay) — introduced a bill seeking to solidify standards on PFAS as well as provide free blood screening for people impacted in the Marinette and Peshtigo area and fund further tests on the chemicals.

The bill was met with opposition. Instead a PFAS bill aiming at research and emergency regulations passed Wisconsin Assembly during its final day of voting on legislation for the year in February. It now goes to the Senate for approval. S.O.H2O said the bill passed is more beneficial to industry than people and they do not support it.

Before the final day of Assembly voting, Oitzinger said the bill Hansen and Nygren proposed was a crucial piece of legislation.

“If that bill doesn't get through this year, it's one more year where there are not enforceable standards in the state of Wisconsin. So we're simply putting more people at risk,” Oitzinger said.

Marinette's current mayor Steve Genisot advocated for the bill and the blood tests for people in the area. He said people want answers about the chemicals and their health.

“Obviously if it's your health and your drinking water it's a very big concern,” Genisot said.

Genisot said dealing with the contamination and the uncertainty surrounding it has been difficult for The City of Marinette. The city's water has not tested high for PFAS, but the TYCO Facility had historically discharged firefighting foams to the wastewater plant in Marinette. JCI reimbursed the city nearly $3 million to clean up the wastewater facility.

JCI says they will continue to help clean up the chemicals.

“Our number one priority to the community is to be sure that there is a clean long-term sustainable supply of drinking water to those affected,” said John Perkins, Vice President of Environmental Health and Safety at JCI.

Perkins said that JCI installed pretreatment systems in the homes of the wells that tested high for PFAS. He said JCI plans on running a municipal water line to all of those homes from the City of Marinette by the end of the year.

Perkins said the company also replaced and sanitized underground wastewater lines and installed two ditch treatment systems to take any historical runoff water. One is on the TYCO site and the other is downgrade from it. Perkins also said they stopped all outdoor usage of firefighting foam at the training center since 2017.

“It is a process, it does take time, but we do need to ensure that our highest priority is that there's clean, safe and reliable drinking water for the community of Peshtigo,” Perkins said.

Some people, like Oitzinger, don't buy it. Oitzinger said the company has missed deadlines for plans and have not communicated with people in the area.

“It makes you angry, it also makes you highly distrustful of anything Johnson Controls tells you,” Oitzinger said.

JCI has a website for updates set up to try and help with communications: https://tycomarinette.com. Perkins said the company has also hosted a couple of public meetings over the last few years.

However, for Oitizinger and others he's talked to the distrust comes from further back. The company found PFAS chemicals on its site in 2013 and did not notify the DNR until 2017.

“At no time did we ever have any indication that it was off-site impacting any private drinking water wells until late 2017 when it was first identified that there were impacts off-site,” Perkins said.

To Oitizinger, that is not a good enough explanation.

“The corporation was irresponsible and allowed the contamination to literally be consumed by the public for three to four years before anybody knew. That's just wrong,” Oitizinger said.

He says they pay attention to research on PFAS from around the world. Studies like Remucal's and UW-Madison.

Back at her lab in Madison with samples from the Marinette area Remucal is working to answer PFAS questions. She has already submitted research proposals for more PFAS work.

“We're only sort of scratching the surface of sampling for them,” Remuchal said.

Especially considering many of the chemicals included under the umbrella of PFAS have been researched far less than others.

She says it's an environmental problem that the country has just been waking up to in the past decade or so.

“They stick around for years like once they're in your body and I think almost everyone in the U.S. Who has been measured has some level of these chemicals in them which is a little scary to think about,” Remucal said.

Remucal is part of the Wisconsin PFAS Action Council, which has representatives from 16 state agencies. She represents the University of Wisconsin System. She's worked with the DNR on combatting PFAS too.

“I think there's a lot going on in Wisconsin now to think about ways to prevent future contamination, but we have a legacy of historical contamination that we're going to be dealing with over the next few years,” Remucal said.

While results from Remucal's work with Marinette-area water and sediment won't be finished for a few more months, the study could help with remediation efforts moving forward.

“I just hope they can come up with a remedy to things soon, because I think people are really getting tired of this guessing game of what's actually going on with this stuff.” Stuppnig said.

The DNR posts updates about the Marinette contamination on their website: https://dnr.wi.gov/topic/Contaminants/Marinette.html