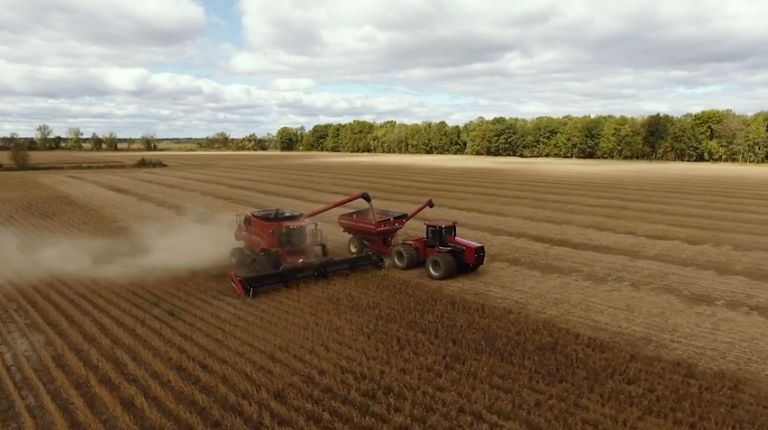 MADISON, Wis. (SPECTRUM NEWS) — Wisconsin farmers are coming off of a tough year.

Harsh weather and trade conflicts have made things difficult for agriculture workers.

But 2020 may hold better news, at least experts the University of Wisconsin Agriculture Outlook Forum hope so.

The forum was held at the University of Wisconsin-Madison on Tuesday. Economists and agriculture experts spoke to the crowd about the year ahead for farmers.

Soybean farmers have been hit hard by the U.S. Trade war with China.

“China was our number one customer overseas and that's pretty much been put on hold for now,” said Robert Karls, executive director of the Wisconsin SoybeanMarketing Board.

“Bottom line is that their prices, they've lost 15 to 20 percent right off the top of what they were getting on the market,” Karls said.

Soybeans were one of many topics at the University of Wisconsin Agriculture Outlook Forum on Tuesday.

“Historically, if you went back five years, China would take about roughly 2/3 of the soybean markets in the U.S., so they have always historically been a very large trade partner,” Boetel said.

While the U.S. and China agreed to phase one of ending the trade war, there still is no concrete information on what that means for soybeans.

Boetel said it's likely too late for this growing season because china has already bought soybeans from South America. The biggest time of year for China to buy soybeans from the U.S. Is typically from November to February.

However, she said there's a reason for optimism.

“Long-term next year we should be hopeful that we will see if not an increase at least a return to where soybean exports have been, which would be good for soybean producers,” Boetel said.

A wet spring followed by early fall snow made things tough on soy and corn farmers.

That kept production down for soybeans, which helped keep prices from plummeting to incredibly low levels. Boetel said they may have gotten lower in a normal year because there was less of a market for American Soybeans with China not buying them.

Across the state, many farmers have still not been able to cut corn after early-season snow kept many farmers out of the field.

Things got better for dairies in the latter portion of the year as milk prices went up to a five-year high towards the end of 2019.

Mark Stephenson, a dairy economist with UW, said he thinks prices will go down the next few months before rising again for the rest of the year.

At least if the milk supply doesn't rise too much. He said if the market is flooded with milk it could prevent the prices from coming back up after a few months.

Though Stephenson told the crowd that higher milk prices won't solve all of the dairy's problems.

“The farm loss that we've seen is not over just because we've got prices that feel like they've recovered,” Stephenson said. “I think this will have a long tail, maybe take another couple of years before we fall back into equilibrium.”

As trade with Mexico and Canada is more secure with the signing of the USMCA, and trade with China could trend back soon, economists are hopeful for Wisconsin agriculture.

Though they do worry about certain countries moving on to buy products elsewhere while trade conflicts raged on in 2019.

“Trade relationships have changed and even with the new trade deal in place, I am curious to see have new contracts been already made around the world? And to what extent will china be purchasing at the same level as it did before,” said Tessa Conroy, economic development specialist with the UW Division of Extension.

Conroy said one thing that still is impacting nearly every part of the economy is a tight labor market. Agriculture hasn't been immune to that.

“Those same labor constraints are putting pressure on agriculture, I think some farms are thinking more about kind of what can we do to reduce our labor needs?” Conroy said.

For many farmers, but especially soybean growers, they certainly hope china will be buying again by this time next year.

“It's vital, it is crucial,” Karls said.

Unlocking exports to China will likely help dairy prices too, as the country is a very large buyer of whey according to Stephenson.

If you are interested in registering you can still do that online, here.

You can also view the Agriculture Outlook Forum presentations here.

This year much of the forum focused on an update on hemp growing and research.