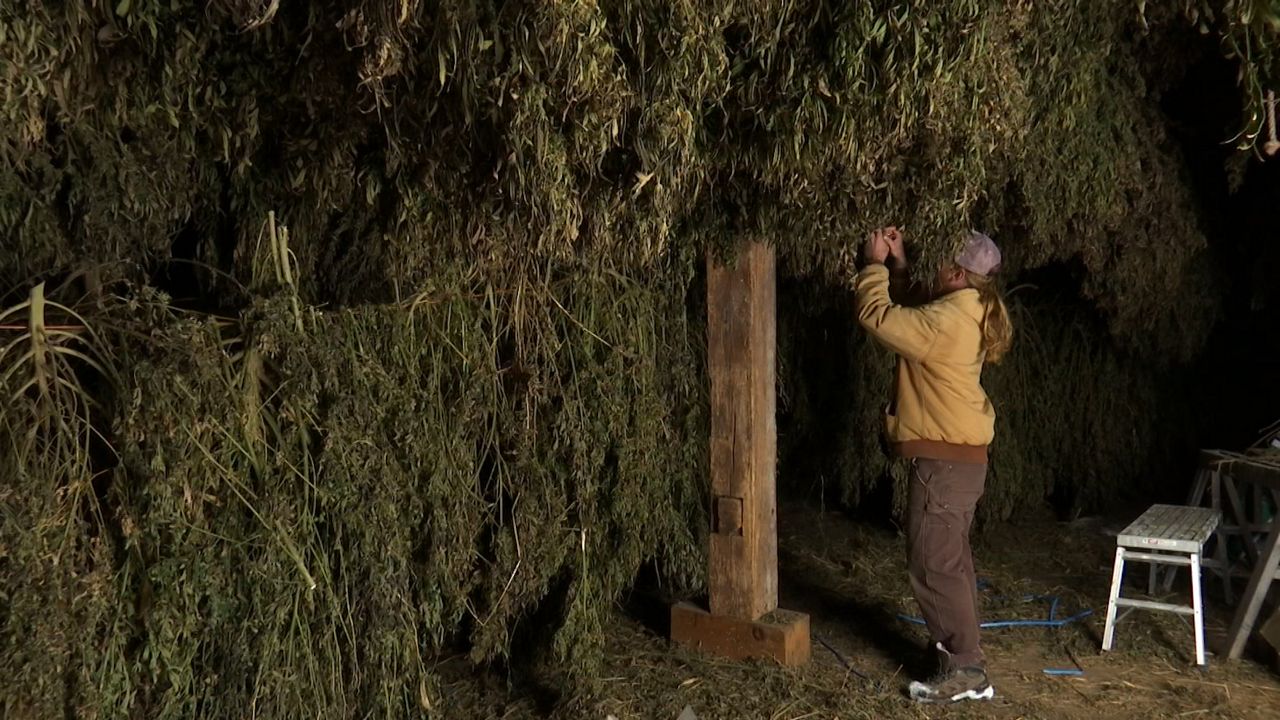 The barn belongs to one of Benjamin Franklin Grant and Standfast Farm's partners. Grant has been working with 13 farms in Wisconsin growing hemp this year.

From the midwest originally, the horticulturist learned to grow hemp and cannabis in California. He came to Wisconsin this year to work with farmers growing hemp for the first or second time and to run classes at the hemp learning center.

He says all of the farmers he's worked with ended up harvesting hemp, which can't be said for every farmer this year.

“Complete success, the weather and all the other challenges of Wisconsin agriculture have completely shown themselves this year and everyone has had successful crops come out of the field,” Grant said.

The wet weather that was tough on all farmers this year, was just as tough on hemp growers too. A wet spring pushed back planting and a wet summer caused rot and fungus.

Grant has heard those stories.

“I hate to use horror stories, but there's been a lot of challenges that everyone has faced,” Grant said.

The Jackson County barn itself is an example of a challenge.

Grant and the farmer he was working with had to scramble to find a place they could lease to dry the crop between harvesting and processing.

For a lot of growers around the state, space to dry the crop was something they didn't account for.

“It's really been a race to find the drying space before the snowfall and the crop went downhill, so a steep learning curve for the farmers,” Grant said.

Then there are the THC tests...

The Department of Agriculture Trade and Consumer Protection has to test fields to make sure it's below the legal limit for THC — the part in marijuana that causes a high.

Of the 2,200 tests that DATCP ran, 289 fields tested too high and had to be destroyed. At about 13 percent that rate is similar to last year.

However, some farmers have criticized DATCP for taking too long to test. A cooperative called South Central Wisconsin Hemp has publicly blamed the organization for crop testing over THC limits to several news organizations. The cooperative could not be immediately reached for comment Wednesday.

DATCP said the chance that the hemp can test too high for THC is simply part of the risk.

“I think it is still something that people need to keep in mind that this still is a high-risk crop, particularly when you are growing in that CBD variety,” said Brian Kuhn, director of the plant industry bureau with DATCP.

CBD is a product you can make from hemp believed to have medical benefits. About 95 percent of farmers in the state were growing for CBD.

At the height of harvest Kuhn the agency had between 20 and 30 people working on collecting samples and testing them.

Kuhn said some farmers had a hard time estimating when the crop would be ready to harvest because they were new to growing the crop.

1,247 people registered to grow last year, only about 850 did plant a crop. In all more than 5,000 acres were planted in the state in 70 of the state's 72 counties. That total acreage is up from 1,800 last year in the crop's first year.Looking ahead as registration opens this month and runs until March for hemp in 2020. Kuhn thinks they will see another uptick in applicants.

“I am anticipating an increase, I don't anticipate it to be as significant or as steep of an increase as we had this year in 2019, but I do think 2020 will see an increase again,” Kuhn said.

Grant says his partner farms will likely be back next year, and some people will expand operations. However, he thinks this year may have scared some people off.

“It's really hard to say, I think bad news travels faster than good news and a lot of people have been waiting to hear how their neighbors do, and with all the challenges that hemp farming presents I somewhat doubt that more people will be jumping into the field of hemp growing in Wisconsin,” Grant said.

Either way, Grant said he enjoyed working with farmers and teaching people how to grow. He and Standfast Farms plan on doing it again next year.

The USDA came out with federal guidelines for hemp farming earlier this week.

Next year is the final year states can operate under their own rules.

DATCAP says the rules they've established fall in line with the federal guidelines.

“We feel good about that because we're well aligned with those, with what the usda has come out with, we saw the writing on the wall,” Kuhn said.