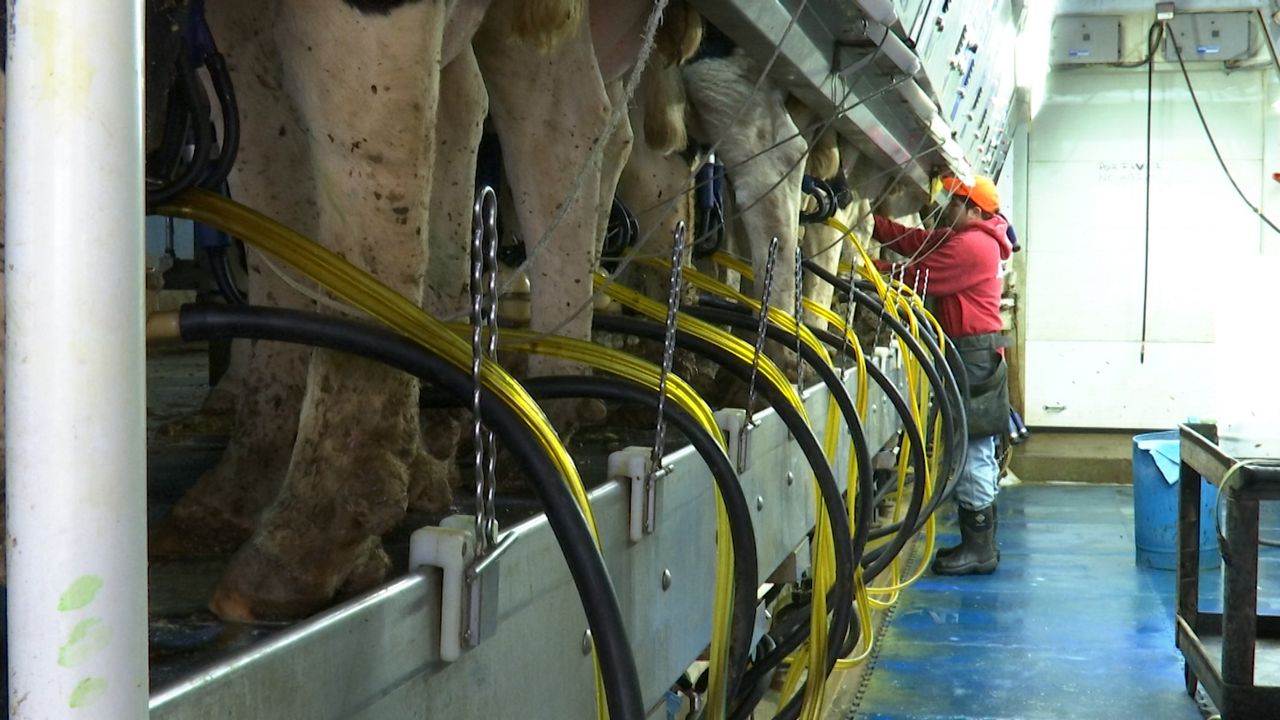 SAUK CITY, WI (Spectrum News 1) — Mitch Breunig has changed how his dairy runs a lot since the 90's. The change, like any industry over the past two decades, stems from technology.

“Back in 1993 we probably didn't use a computer at all,” Breunig said.

They track milk weights, the feed program, genetics, even the cow's movements.

“All that data is just sort of out there, we produce a lot of data on our farm every day,” Breunig said.

The thing is all of those operate separately leading to several data streams coming in to different softwares. Meaning if Breunig wants to analyze all of the data and make decisions off of it, he needs to compile it himself.

Analyzing it is a time consuming task for the dairy manager. He says he doesn't have time to sit down and pound out an excel spreadsheet every night.

“By the time I sit down and get it done, I'm looking at data that's maybe a week, maybe a month, maybe two months old,” Breunig said. “It's good to look in the rear view mirror, but that doesn't help me move forward and I want to know what's going on today right now.”

Breunig thinks there has to be a better way to have the data and use it too. Which is why he's part of six dairies working with the University of Wisconsin to develop a server that can connect the various data streams dairies generate.

It's called the Dairy Brain Project. Dairy specialists at UW have teamed with several people in the computer science department to create a server that can hold all of the data and organize it in a way helpful to the farmers.

“Dairy farmers nowadays are inundated with lots of data and lots of new technology, they have sensors they have different software and they don't use to the full extent,” said Vitor Cabrera, a professor and extension dairy specialist in dairy farm management.
Cabrera has been working on this project since 2017. He has high hopes for what a final product could do for the dairy industry.

“This could make a dent in the way farms operate,” he said.

Through the project Cabrera already knows several spots in daily operations that can be more efficient.

For example he says dairies could be grouping cows by nutritional similarities rather than other factors. If cows were in the same pen with others that have similar nutritional needs then farmers can give a specific diet to them, increasing their feed efficiency.

“The savings in feeds and the potential gain in productivity of the animals would be significant,” Cabrera said.

Another example he gives of how having access to the data organized in real time is predicting diseases. He says the “Dairy Brain” could help the farmer identify sick cows quicker as well as even project when a disease could hit groups of them.

Cabrera said the server would anonymize the data, and they couldn't disclose it from any farm specifically. He said making sure dairies aren't identified by the data is important.

“There will still be a need of the farmer, and the human brain to make the final decision, but likely there will be a strong support from the computer system showing what could be potentially those best decisions based on data,” Cabrera said.

The project has funding through June of 2019 through a UW grant. Cabrera and his colleagues are working on getting more funding to keep developing the Dairy Brain. They are waiting to hear back to from the United States Department of Agriculture on a grant that could help them make the server more available to farmers around the country. Cabrera will also be presenting on the project this summer at conferences.

Cabrera says he's certain the Dairy Brain can make farms more efficient. Right now dairies in Wisconsin could use anything that can trim costs.

“In this environment of low milk prices and low commodity prices we have to do everything possible to stay in business,” Breunig said.

Dairies in Wisconsin are closing at record levels. Nearly 700 farms closed in 2018 in the state. If they could get more out of feeding, prevent sickness, breed more efficiently, or alter anything to save money, it could help.

“The ability to be able to do that is just going to help our farmers be competitive not only with farmers from other states but farmers across the world,” Breunig said.