15 Years Later: Looking Back On The Wisconsin Tornado Outbreak of 2005

It's been a decade and a half since the atmosphere unleashed a swarm of tornadoes upon Wisconsin. We take a look back at what happened that day and what has changed since.

While 2005 doesn't seem that long ago, think about this: Twitter didn't exist yet. Facebook was in its infancy--and restricted only to a handful of college campuses. The iPhone, well the iPhone was still 17 months away from seeing the light of day.

So imagine what it was like on Thursday, August 18th, 2005 when the weather turned ugly in Wisconsin. Here is an idea, as captured by Jeff Ackerman. His home was destroyed by that very tornado:

Within eight hours, hundreds of buildings were destroyed, countless lives were changed, and Wisconsin went into the record books.

In all, 27 confirmed tornadoes hit our state, mainly in southern Wisconsin. This map shows the various paths. 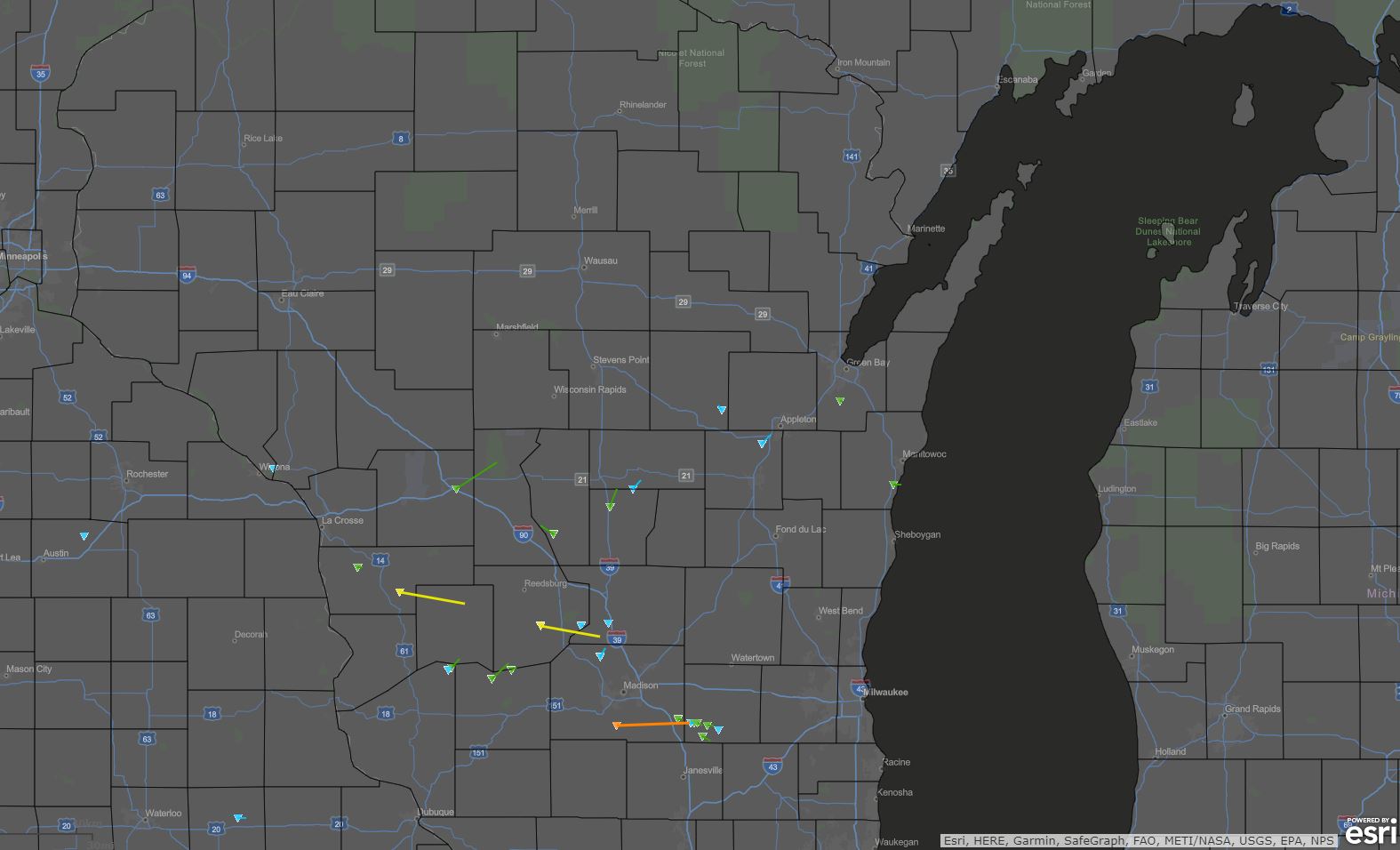 Damage surveys conducted afterward showed that most of the tornadoes were on the lower end of the Enhanced Fujita scale. 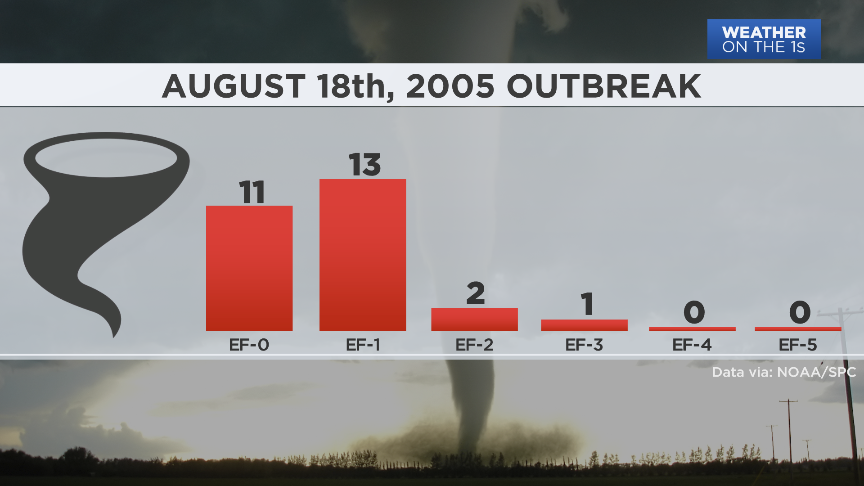 Here is a list of all of the tornadoes from that day, along with their Enhanced Fujita scale rating: 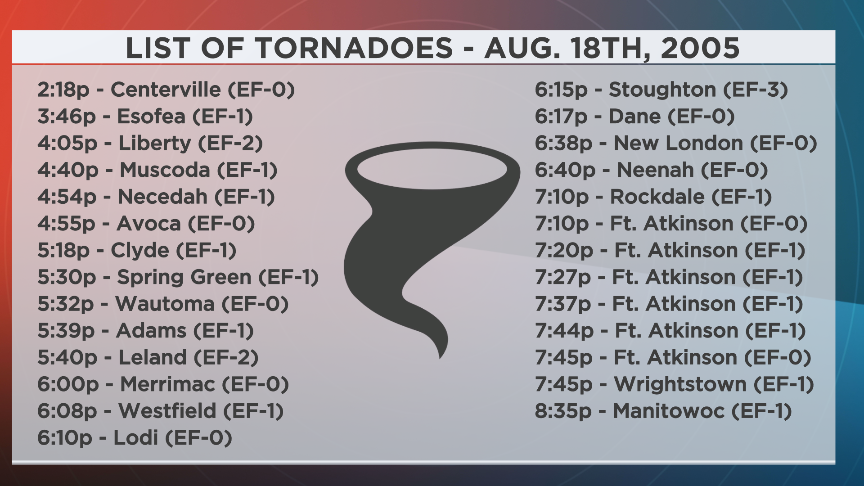 The worst tornado was the EF-3 in Stoughton (just southeast of Madison), which struck shortly after 6 p.m. One man was killed while trying to get to shelter.

The town was practically flattened. The front page of Friday's newspaper showed the devastation in vivid detail: 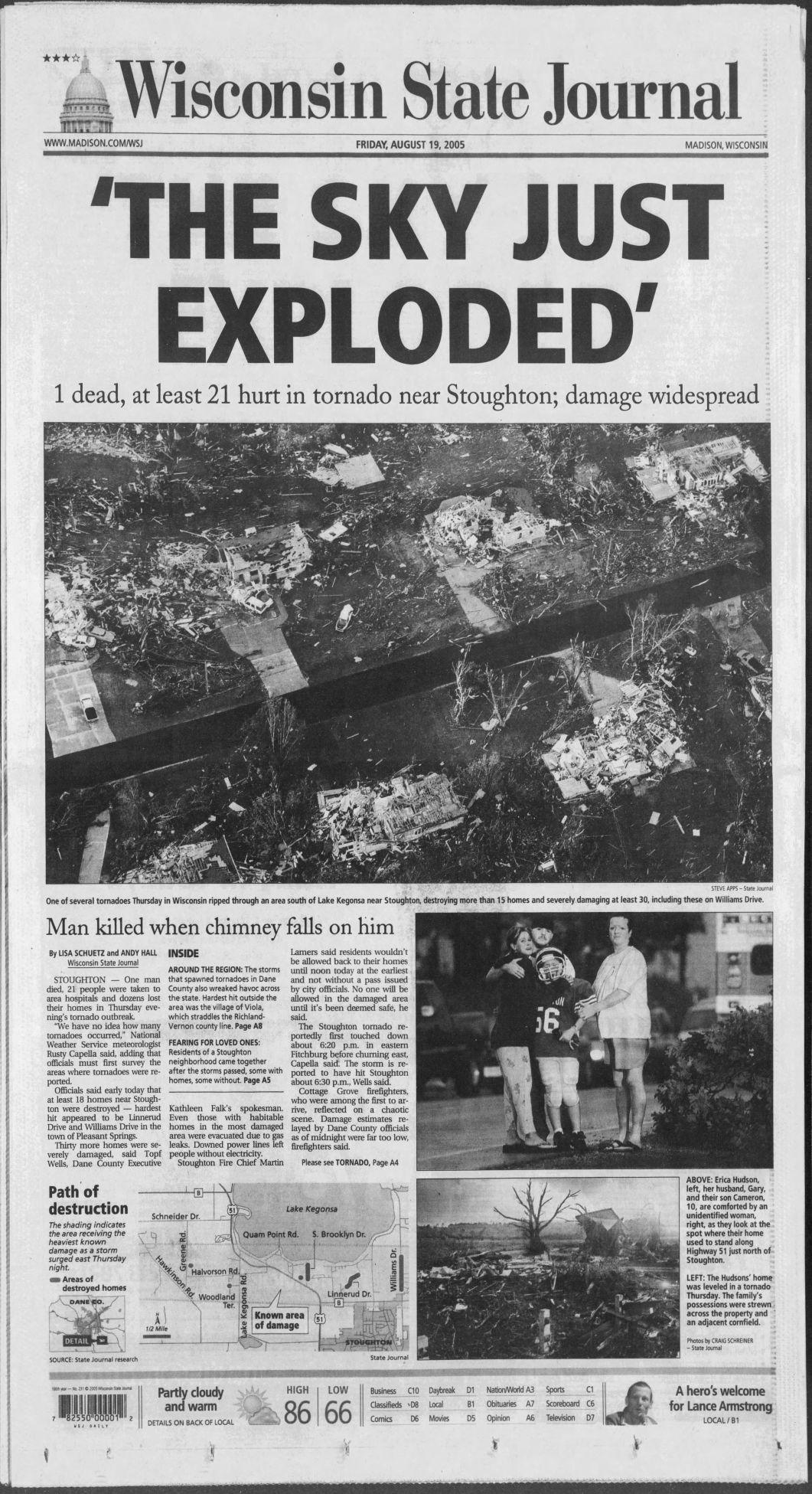 Cars were flipped, trees were stripped, and residents were left in disbelief: "how could this happen to me?". In the days following, debris from Stoughton was found over 50 miles away in Waukesha, WI. 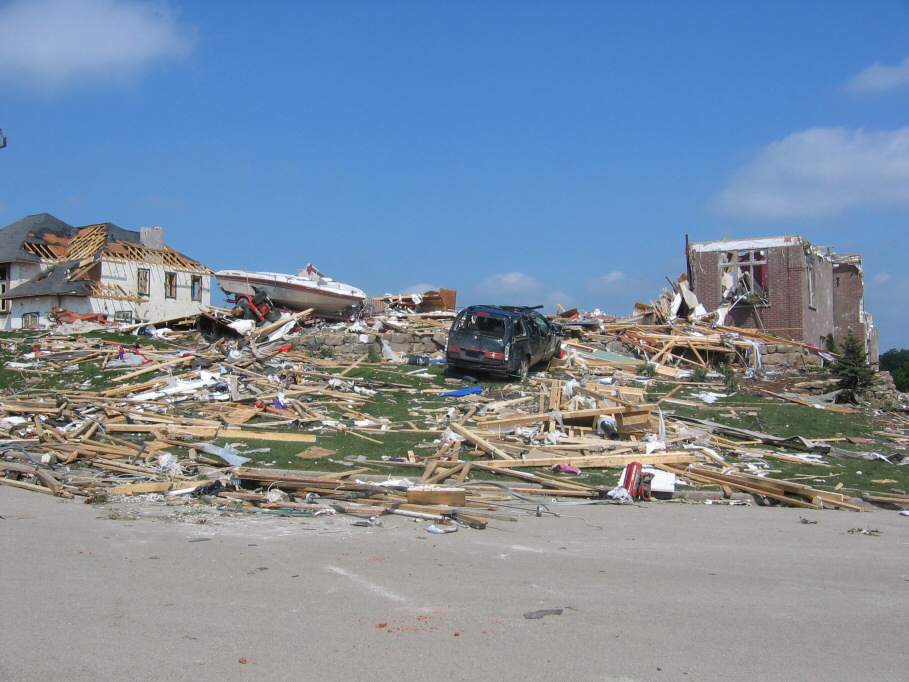 Days after the tornadoes hit, many other photos and videos began to surface, showing the extent of the damage. Remember, there wasn't any social media at the time. It took longer to get a grasp of what exactly happened and how many families were impacted. 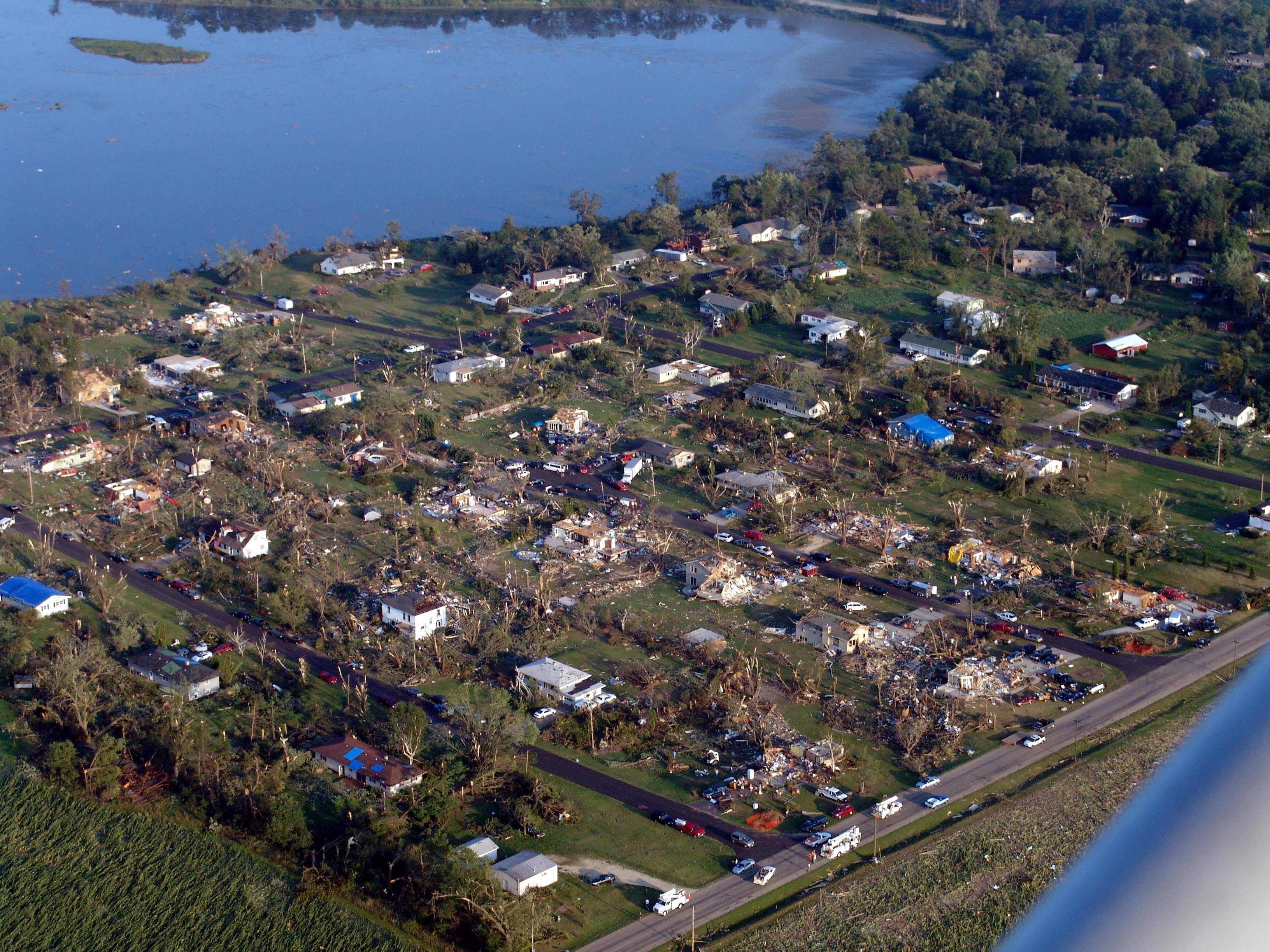 The fury of the atmosphere was simply jaw-dropping. Below is a video of the Stoughton tornado, captured by Colin McDermott.

How Did This Happen

The weather set up on August 18th, 2005 was a "perfect storm" in terms of atmospheric dynamics.

A strong area of low pressure swept through the state. Along with it, a powerful warm front helped draw in moisture-rich air. Trailing that low pressure was a very strong cold front.

All three of these things helped create a recipe for disaster. 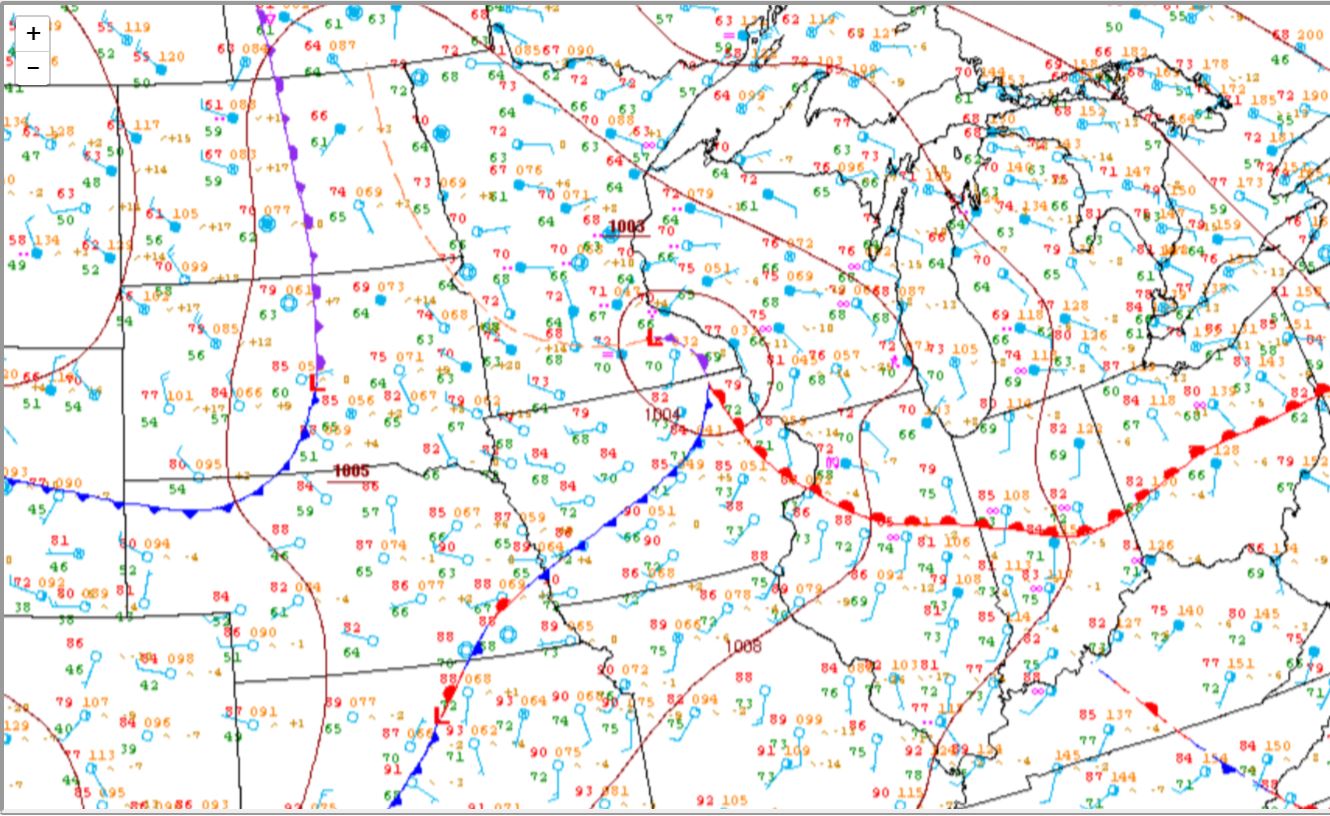 This was a textbook case of everything being in the right place at the right time (in terms of tornado formation). There was enough "twist" to the wind from the surface to the upper parts of the atmosphere. 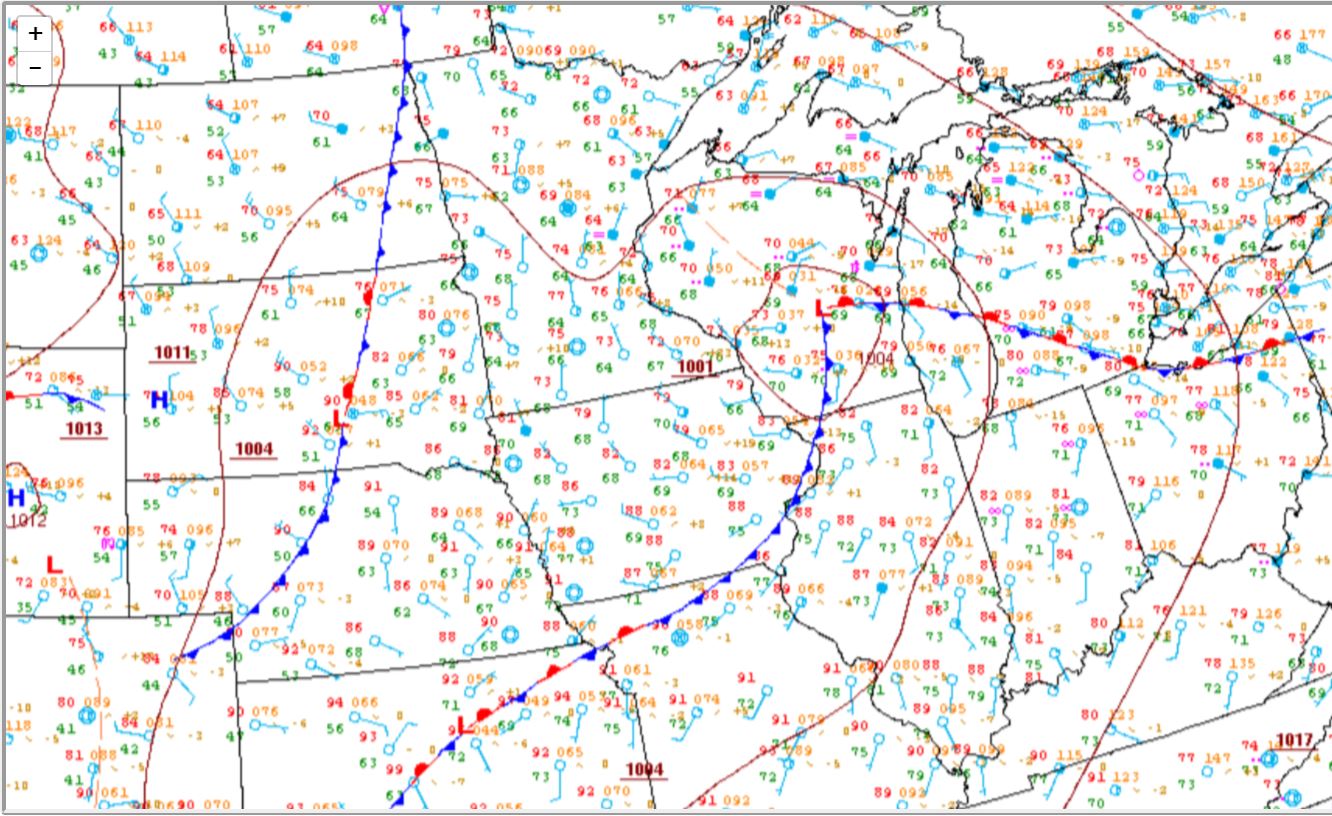 And once the storms developed, it did not take long for Doppler radar to show the gut-sinking signature meteorologists fear: a hook echo.

Then, looking at the velocity (wind) part of radar, it was easy to see there was tight rotation in several of the storm cells (indicating a tornado):

As fast as glass shattered and the trees snapped, the storms moved out. By nightfall, families across southern Wisconsin were left shaken and changed. Forever. 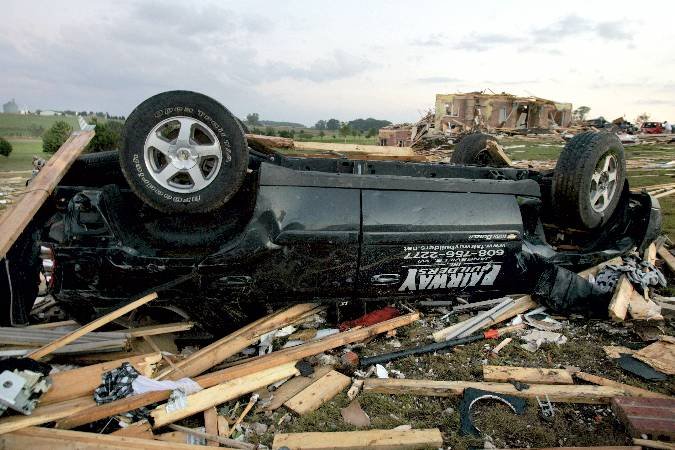 In The Years Since

If you drive through the areas hit--including Stoughton--you wouldn't really know what happened 15 years ago. There are not many visible memories left of the damage.

Pick up a book, however, and you can relive that terrifying day through the words of those who rode it out. 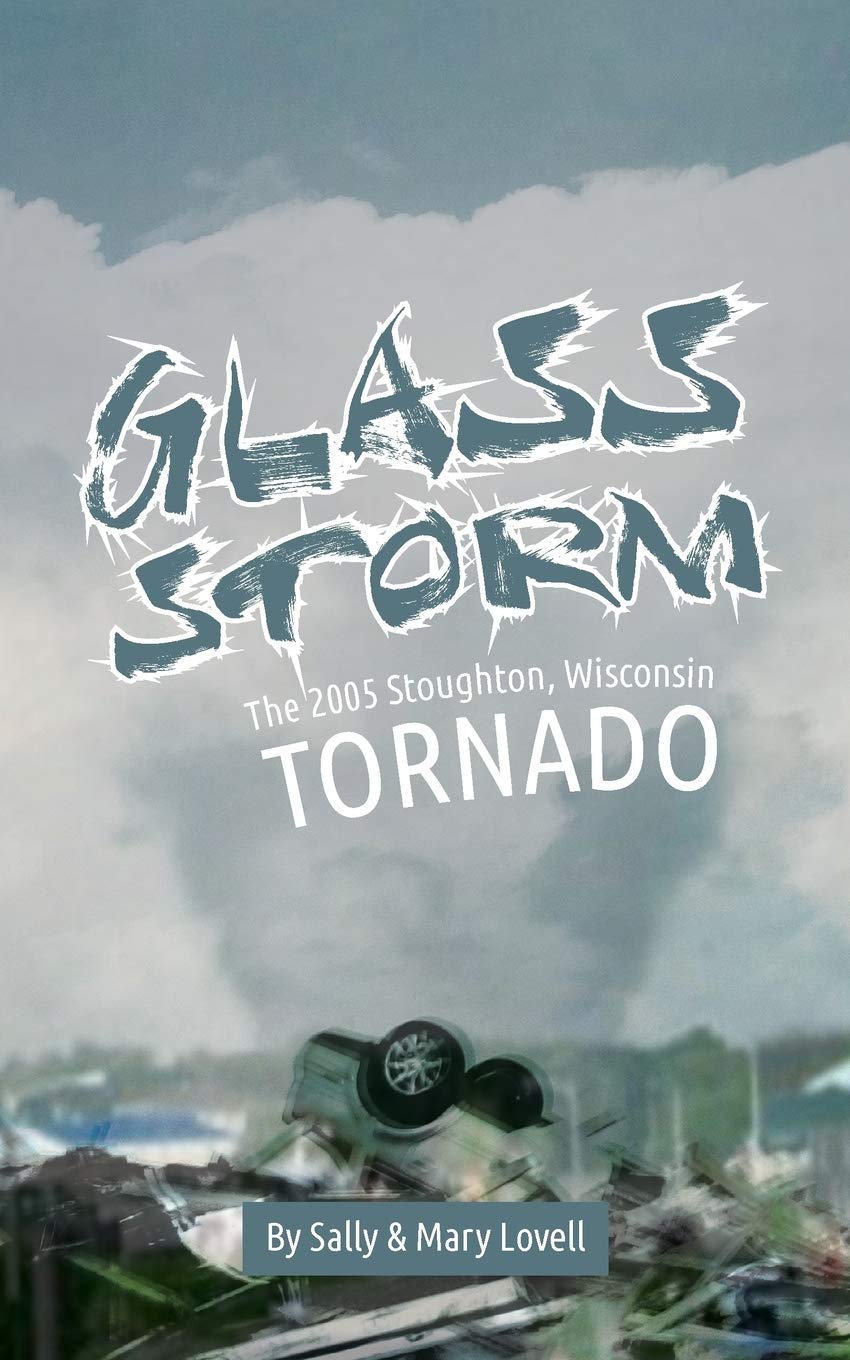 Sally and Mary Lovell have written "Glass Storm: The 2005 Stoughton, Wisconsin Tornado". The book documents the heroes of that day, as well as the memories of all the busted glass they endured.

Ironically enough, hours before the storms hit, Mary was at the Red Cross donating blood. That night, it was the Red Cross at her door offering shelter and food.

Also following the outbreak of 2005, the state's first mobile home storm shelter was constructed. Moreover, emergency operation centers were enhanced to improve communication for those responding to storm damage.

For many of us, the Wisconsin tornado outbreak of 2005 is just another weather stat. For those who survived, however, it's a memory etched into their souls, never to be forgotten. 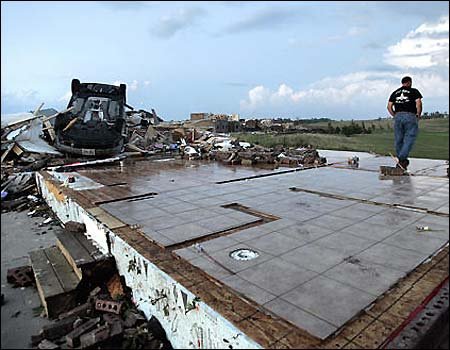