Bob Klopke is the former Gresham High School principal and the president of the Gresham Scholarship Fund. Courtesy: Curt Knoke

A degree of $uccess: Gresham Scholarship Fund, which gives all seniors an opportunity to receive a scholarship, reaches $1 million

GRESHAM, Wis. — The first hint Bob Klopke received that this grand plan might have a chance is when he was standing sentry at his customary post, the gym doors at Gresham High School.

That’s when Arnie Dalke, a grandparent of one of the athletes in action that evening, handed Klopke something other than a ticket on his way inside.

And so it began. This idea that this community of some 560 people, with a poverty rate at twice the national average, whose school, for years, was under the threat of closure, would somehow be able to start a scholarship fund with the intention of giving every graduating senior a financial boost toward their post-high school education, was more than fantasy.

“We hadn’t even been out trying to twist arms or anything at that point,’’ said Klopke, the former principal at Gresham and the fund president. “But he heard about what we were trying to do and jumped on board.’’

That was some 20 years ago and the bandwagon has long since been full. The annual banquet to support the Gresham Scholarship Fund has become one of the city’s most-anticipated and celebrated community events each year, with 25% of the city’s residents attending.

And today, the pride, determination, resourcefulness and grit of a small community has reached a milestone, as the Gresham Scholarship Fund now totals $1 million.

Klopke hears this and, only half-jokingly sticks out his chest. 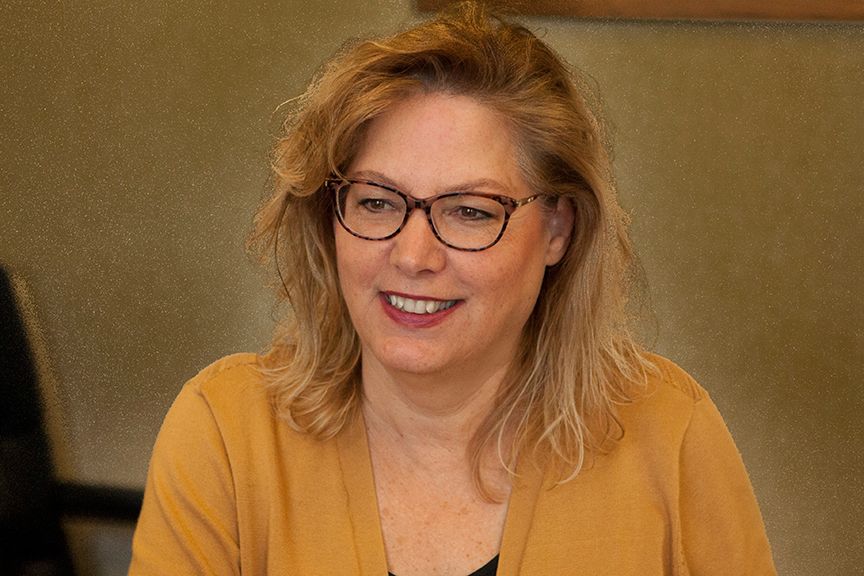 Andrea Quinney is on the Gresham Scholarship Fund's board of directors. (Courtesy: Curt Knoke)

And they do. And should.

“We’re just from this small community,’’ said Andrea Quinney, who is on the fund’s board of directors. “And, we do some things better because we are small.

“The pride is overwhelming. It’s huge.’’

For decades, Gresham played the role of underdog because it had to.

“Our school has been part of a unique thing,’’ said Dan Huntington, a lifelong resident who runs the local hardware store, the school buses and is an auctioneer in his spare time. “We were a joint school district with Shawano and we separated about 11, 12 years ago. We’re the only school district that has ever seceded in Wisconsin from a larger school district. So, it’s something that doesn’t happen.

“So, we fought many times just to keep the school open. The school was under siege, put it that way, since the (19)50s of being closed.’’

Closing the school would have meant a daily 28-mile round-trip trek to Shawano for their children, something they wanted no part of.

“Whenever our backs were up against the wall here, and the chips were down, it really rallied the community,’’ said Huntington. “And what I think the scholarship banquet does is, we all get together again and we have that same type of feeling. It’s something we feel is really worth fighting for, our community and our school. And, I think, that’s what really keeps the banquet going year after year. We know what it is to almost lose your school.” 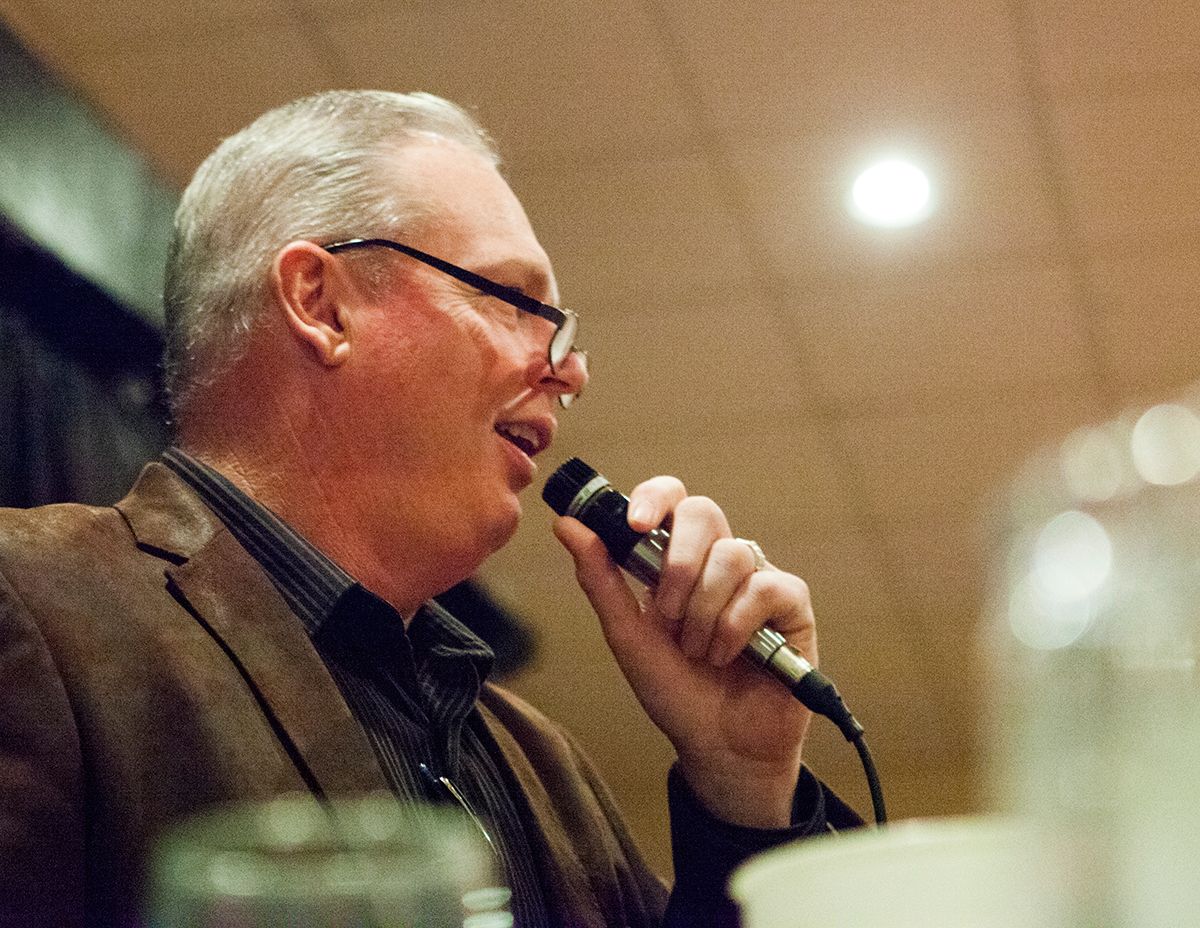 The local referendum to secede from the Shawano School District and form their own passed with 85% approval which, perhaps, is why when it comes to the banquet, Huntington has been able to stand before his friends and neighbors and, utilizing his best auctioneering skills, coax $4,600 for five pies.

“We get such good support from the local community, and it’s fun,’’ he said. “It’s all about having a good time, and they know it’s for a good cause, and if the raspberry pie comes up, it’s going to bring some good money. You can’t get raspberry pie like that just anywhere; it’s only at the banquet.’’

Curt Knoke, who volunteers for the Shawano Area Community Foundation, which is under the umbrella of the Community Foundation for the Fox Valley Region and where the endowment for the Gresham Scholarship Fund is run, thinks seceding from Shawano led to a shift in the community’s outlook.

“It might have given more incentive to help out our students that way,’’ he said.

“It’s one of the most satisfying things that I’ve been involved in. It’s pretty special to see it happen. It almost brings tears to my eyes.’’

Ben Smith remembers the English paper he wrote in eighth grade, the one that said he was going to come back to Gresham and become a teacher at the school. And he has.

If retroactive grading were a thing, he would get an A+.

“If you’ve ever gone to a small school or grown up in a small community, you understand how important the connections are and how special those are. And I’ve always felt that here, so getting to actually know my students and their families, more than just them being a student, I get to know them as people, too; that’s exciting. That’s what I wanted to come back.” 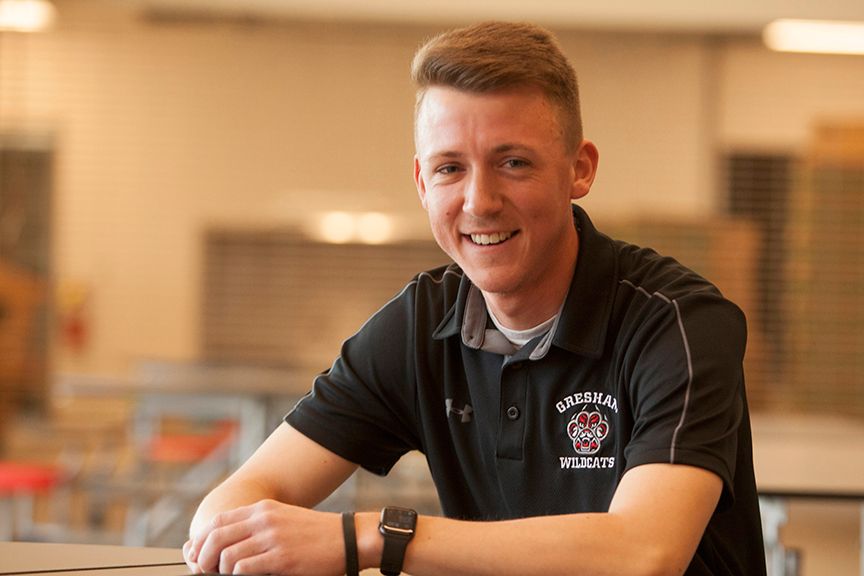 Smith said the scholarship fund was a huge motivating factor for him in high school.

“Anytime you can add to that pot of furthering your education, you’re doing yourself some justice there,’’ he said.

Smith is an elementary education teacher, but his teaching career there actually began when he attended the College of Menominee Nation.

“Because (CMM) has night classes, I was actually able to work here part-time with special needs kids,’’ Smith said. “I’d work here until 3 p.m., then go to school until 9 p.m. So I was doing that every single day. It was actually great. Obviously getting to know the students, getting job experience, making money and being a full-time student; it was a lot on my plate, but it was definitely worth it.”

And he says he’s in this for the long haul.

“You work in this community and you become invested in these kids. You care about them long after they leave the classroom. You’re not just worried about their education, but where their next meal is coming from, what they’re doing, and hope they’re OK.”

The Gresham Scholarship Fund has been much like that coin jar on your dresser.

A nickel here, a dime there, and pretty soon you have more money than you realize.

“I think they saw the value, at least, I think, I saw the value, of lots of little donations can add up,’’ said Klopke. “And we got little donations, $5, $10 sent to us. We had people that were more generous, deeper pockets, that kind of thing to help us even more. But maybe, percentage-wise, they were each doing what they could.”

To earn a scholarship, seniors have to fill out a short application form and then maintain a 2.0 GPA through high school and the first semester of college or technical school. This year, that scholarship is worth $3,250 for the senior class, which averages 19 students a year.

“I like to tell these kids,’’ said Knoke, “that if they apply, and get the scholarship, it’s one of the few times in their life they can make several thousand dollars an hour.’’

The question now, perhaps, is where do they go from here?

In 2019, the town again showed its willingness to invest in its students and the town’s future when it passed by a 55%-45% margin an $8 million referendum that called for an addition and renovation of the school.

“They say, and I’ve heard it before, too, that in a small town, the town could die without a school,’’ said Knoke. “Hallelujah, we’ve got one and it looks like it’s very healthy and will be around for a while.’’