Dayton's love affair with the Dragons began in 2000. Over the past 20-plus years, the popularity of the team led to the transformation of downtown Dayton. (Photo courtesy of Dayton Dragons)

If you build it, they will come: Dragons baseball key part of downtown Dayton 'renaissance'

DAYTON, Ohio — Cara Chitwood and a group of about 50 friends plan to be among the roughly 8,000 people at Day Air Ballpark on Friday for Opening Day of the Dayton Dragons’ season.


As of Wednesday, the forecast doesn’t look like an ideal day for baseball: cold temperatures, a strong chance of rain and maybe even snow. But they’ll still give it a go for the scheduled showdown against the Fort Wayne TinCaps.

Rain is no big deal for Chitwood; her first-ever Dragons game a few years ago was also rain-soaked. She won tickets at work and, despite the bad weather, went anyway to see what all the fuss was about.

While not a huge baseball fan, Chitwood enjoys going to games to watch the “stars of tomorrow.” Some of the Dayton players may end up in Cincinnati Reds uniforms one day: The Dragons are the Reds High-A Minor League affiliate. 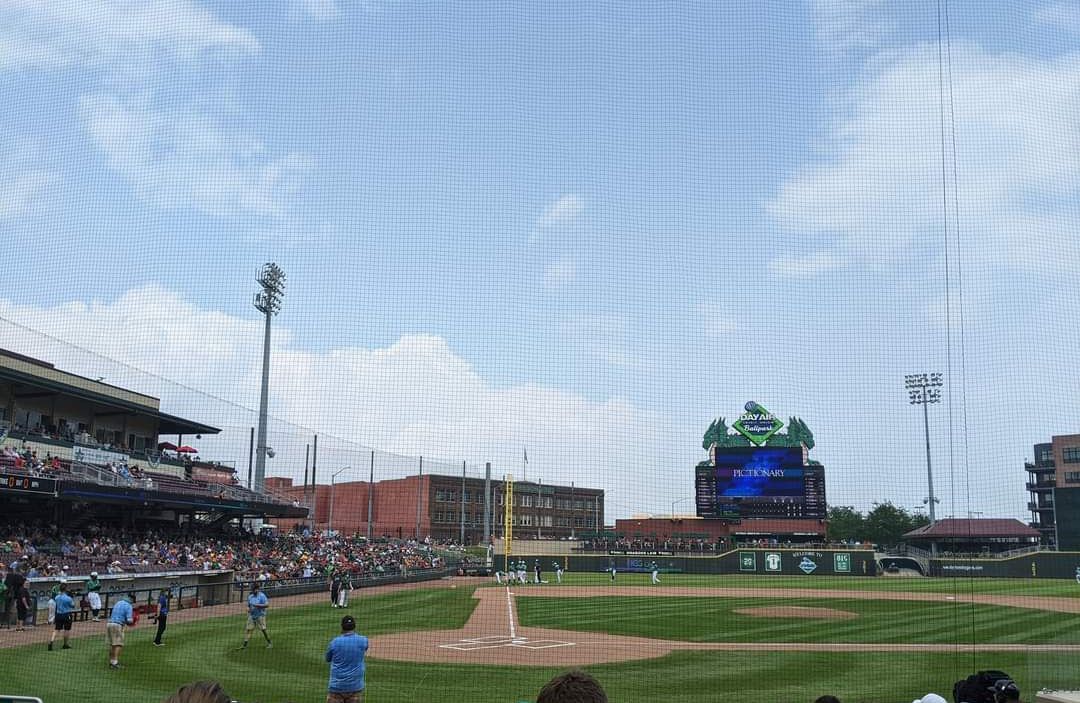 The Dayton Dragons have the all-time sellout record for sports franchises in North America.

Game tickets can be scarce and it’s been that way since the creation of the team 22 years ago. The Dragons hold a North American sports record for consecutive sellouts: 1,385.

“We busted out the ponchos and had a nice time,” said Chitwood, who lives with her husband in Riverside, a suburb about four miles east of Dayton. Some of the couple’s favorite memories are meeting up with friends at a Dragons game.

“The games are just a great time,” she added. “They’re fun and they offer a great reason to hang out with friends, before and after the game as well. We make a whole event out of it.”

Chitwood attends a few games for both teams each season. The Reds play about 54 miles southwest of Dayton.

Joey Votto, Edwin Encarnacion, Billy Hamilton, Jay Bruce, Adam Dunn and Todd Frazier are a few of the 117 former Dragons to spend time in the big leagues over the past two decades.

Hunter Greene, a top prospect for the Reds and a member of the team’s Opening Day roster, spent the 2018 season in Dayton. He was teammates that season with reigning National League Rookie of the Year, Jonathan India.

And that’s OK to Chitwood and the more than 500,000 fans who flock to the Day Park Ballpark every season. Because the allure isn’t just about the names of the back of the jerseys.

Chitwood is like many Dragons fans who head out to dinner or grab a few drinks and take full advantage of a downtown Dayton social scene that’s grown in the two decades after construction of the stadium, formerly known as Fifth Third Field.

“Regardless of what happens Friday, I’m sure this won’t be my last Dragons game this season,” she said.

Dayton and area baseball lovers have embraced the Dragons since their inaugural game back in 2000. The club sold out every home game, roughly 70 a season, between then and the end of the 2019 season.

“That support has been here since Day 1. We sold out the first game, second game, the third game and so forth. And that streak continued through the end of our 20th year,” said Tom Nichols, who’s in his 14th season as voice of the Dragons. “The entire Miami Valley is a great family sports market.”

The Dragons broke the all-time professional sports record for most consecutive sellouts in 2011 at 815 consecutive games, surpassing the record formerly held by the Portland Trail Blazers of the NBA. The Dragons’ streak continued for the next eight seasons.

COVID-19 concerns led to the cancellation of the 2020 season. and ongoing social distancing restrictions last season capped attendance at about 30%. Nichols said they “paused” the sellout streak after the 2019 season, but he doesn’t think that should diminish the team’s impressive community support.

Forbes magazine listed the Dragons in 2016 as the third-most valuable Minor League Baseball team with a value of $45 million, putting them ahead of teams with much larger stadiums and more famous names in the dugouts.

The franchise’s connection to Dayton extends beyond the ball field. When the team isn’t playing, it hosts events like an annual 5K race and beer tastings. 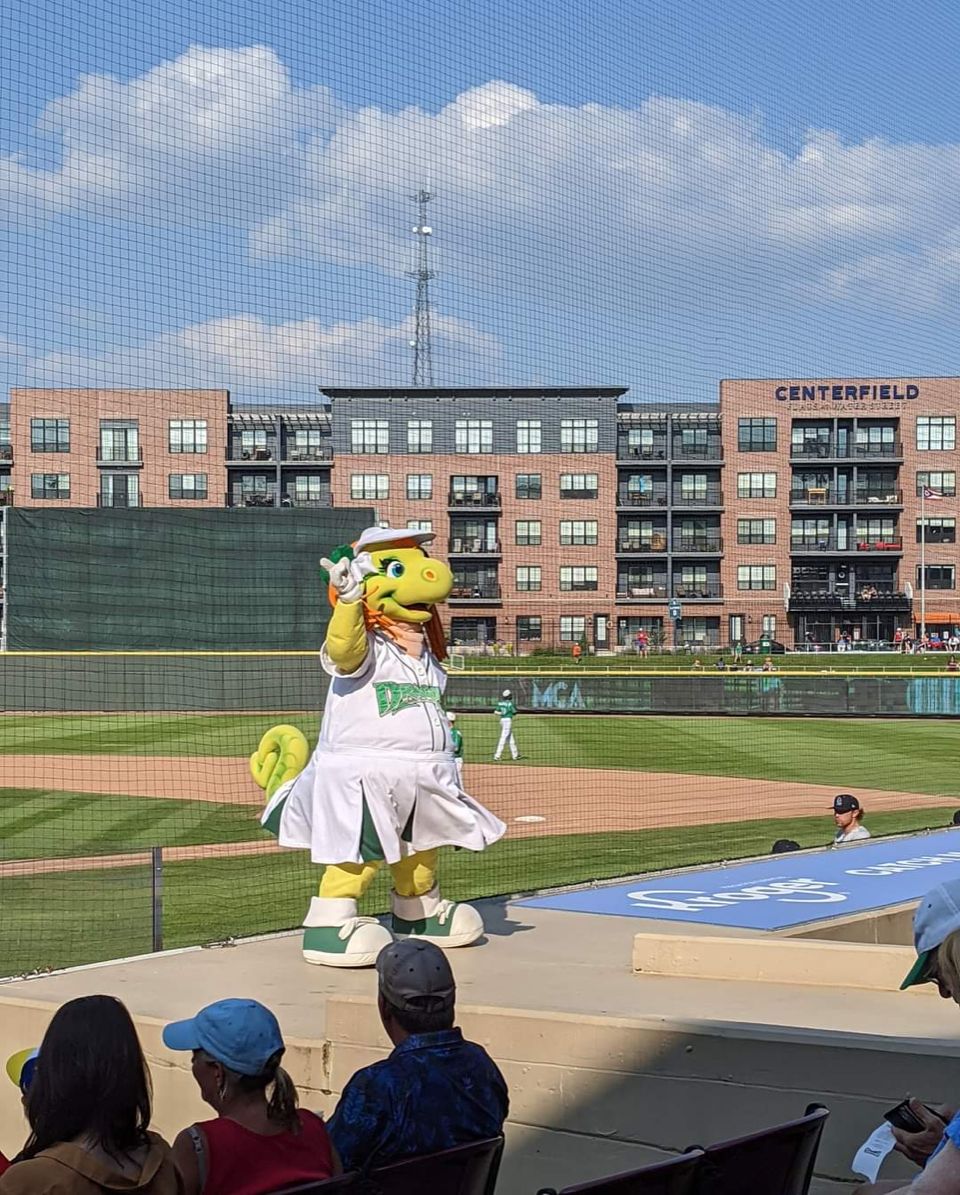 The Dragons have a full entertainment staff to keep fans energized throughout the game. Fan experience between innings is as important as during the game, the team said.

At the stadium, the Dragons hold regular fireworks displays and movie nights, where fans can bring a blanket and watch a feature film on the stadium’s 2,000 square-foot high-definition video board.

“In minor league baseball, the spotlight really is on the fans,” Nichols said. “Everything we do in terms of the overall game-day experience focuses on the fans.”

On game days, the Dragons have a full-time staff that concentrates only on entertainment inside the ballpark. That includes skits, sing-alongs and contests.

One of the most popular events is the toddler race.

“We bring three toddlers out of the audience with their mothers, and they race on a track we set up on the infield in between innings,” Nichols said.

Fans also go crazy for the team’s four costumed mascots, including Heater and Gem, who make their way around the ballpark during the game and dance on top of the dugouts between innings.

There’s also a cyclops named Wink and Roofman, an old school superhero wearing a cape, mask and tights who runs onto the roof in the later innings to throw T-shirts to fans.

“We’ve got roughly 90 seconds every half-inning to do something on the field to entertain everyone in the ballpark and we take advantage of that 90 seconds each time it arrives,” Nichols said.

The stadium only has 7,230 stadium seats, but capacity can reach up to 8,500 thanks to 29 luxury suites and standing room areas in left field. One of the most popular areas is the outfield grass in right-center field where up to 1,000 fans pile in with blankets for picnic-style snacks.

The lawn is where David Taylor and his family usually sit.

Taylor’s son, Teddy, 9, loves the Dragons. He owns a variety of team gear, including an oversized green foam finger. You’ll often find him wearing his ball cap, with the team’s stylized “D” logo that features a dragon tail.

The Taylors attend several Dragons games a year, usually when they're visiting relatives in nearby Centerville. Games are an excuse to head to downtown Dayton and appreciate the city’s riverfront.

“It’s just a lot of fun,” Taylor said. “Grabbing food, sitting in the grass as a big family group in the outfield—what’s not to love?”

They built it, and the fans came

It’s not just the Taylor family; the Dragons are a regional attraction. If you visit downtown on a game day, you’re likely to run into fans traveling from Beavercreek, Centerville, Huber Heights, Springboro and Vandalia. Many are families who otherwise may not have brought their kids to downtown on a Friday or Saturday night.

“You’re seeing families drawn to the downtown area that might otherwise stay in their suburbs,” said Holly Allen, of the Dayton Area Chamber of Commerce. “People have all sorts of crazy misconceptions about downtown areas, so the Dragons help people to become familiar with their downtown.”

Once people are in the urban core for the game, many also go to restaurants, bars and shops. The Dragons have a direct annual economic impact of about $27 million.

But what they mean to downtown Dayton is much bigger than dollars and cents alone.

“Dragons games help create a vibrant, diverse community,” Allen said. “Coming downtown, you’re able to meet people from other communities, other walks of life. That sense of vibrancy and diversity is part of what we love and embrace about the Dayton region.”

While the Dragons caught fire with fans right away in 2000, the development of downtown Dayton took a little longer. But “it has picked up speed tremendously” over the past decade, Allen said.

“If you look into those pictures of the site from 1998, which is about when they started looking at building the stadium, it’s absolutely a night-and-day difference,” Allen said.

She specifically noted the “explosion” in the area around the ballpark, where several restaurants, breweries and loft apartments have popped up. A new AC Hotel by Marriott is going up in the Water Street District on East First Street, next to the stadium.

Allen said the demand for housing in downtown Dayton is “unbelievable,” and they’re seeing “more and more businesses following where the people are” because of the quality of life improvements taking place. 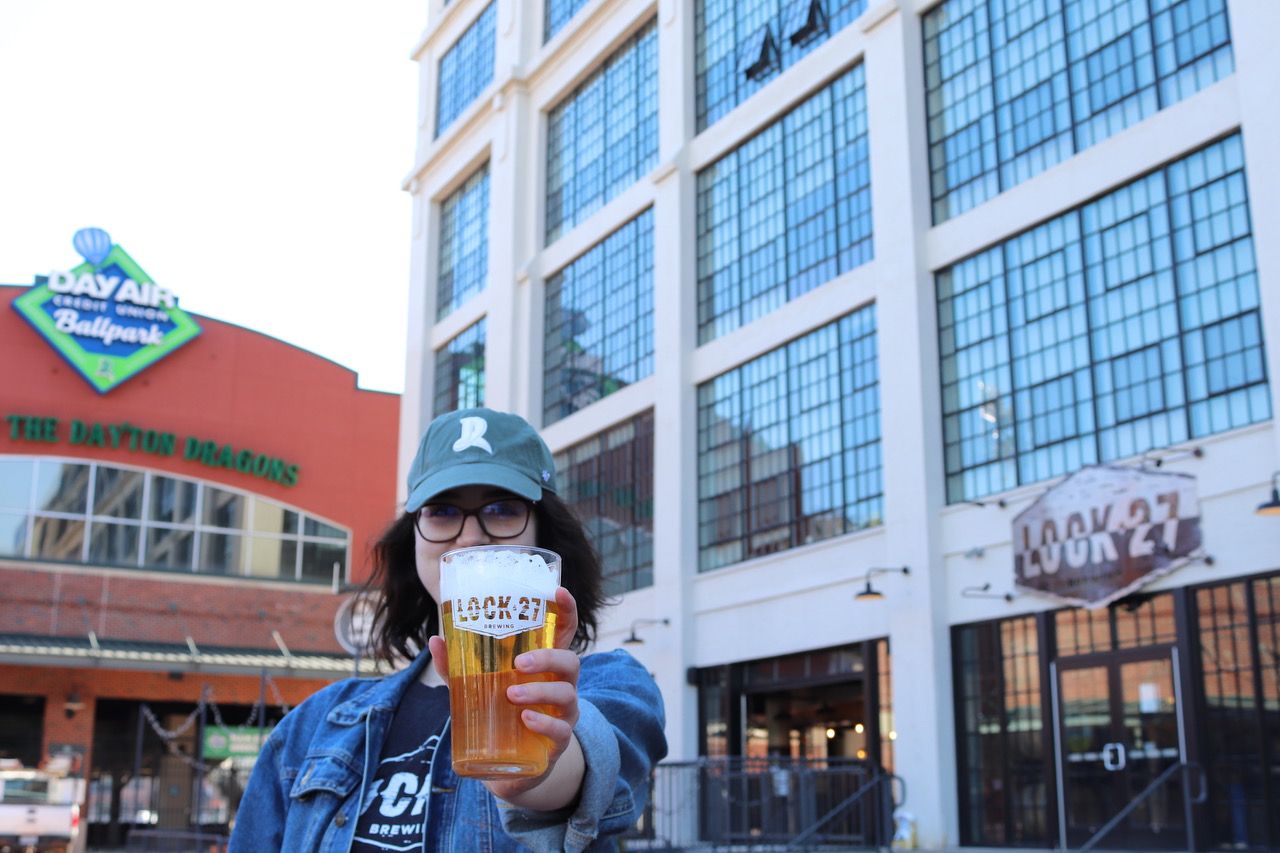 Lock 27 Brewing is one of several businesses that decided to open shop downtown in part because of the success of the Dayton Dragons. (Courtesy of Lock 27 Brewing)

Capital investments in the riverfront parks by the city, new businesses popping up downtown and a surge of younger people wanting an urban experience all played a role in the transition. But in a way, it started with the Dragons.

“Downtown Dayton has gone through a renaissance probably in the last 15 years,” said Allen, who moved to Dayton in 2008. “I don’t think you can overstate the effect that Dragons have had on the city’s growth.”

In September 2017, Lock 27 Brewing opened in the historic Delco Electronics building, which overlooks the public plaza at the main entrance of the Dayton Dragons’ home. The Delco building also has more than 130 apartments.

Lock 27’s owner and founder, Steve Barnhart, moved his main brewing operations downtown in part because of the exciting things happening in the area.

Barnhart called the Dragons the “anchor” of the neighborhood.

“The Dragons attract people from all over the region. That’s what we aspired to do with opening a new location in the Dayton area,” Barnhart said.

“When we opened at this location, there wasn’t a lot going on in the area besides the Dragons’ stadium,” he added. “Now, it’s transforming into the Water Street District, filled with restaurants, new apartments, community events and people are excited to be in this area.”

Columbus developer Crawford-Hoying also has a mixed-use project planned for the Water Street District. It’s at the site of the former Mendelson building. A few blocks west, the ongoing redevelopment of the historic Dayton Arcade continues.

To some, it may be difficult to attribute the economic well-being of a city to the existence of a minor league team that plays a couple months out of the year. But Allen said building the stadium also set a tone for the redevelopment downtown Dayton.

It “calmed the nerves” of what Allen called “industry followers” who were waiting for someone else to make a major investment and put down roots.

“Investors saw a baseball team willing to invest millions in downtown Dayton. They saw the community come together to not only support but rally around the baseball team,” she added. “That’s when the investment came.”