A colorful creation: The chemistry of fall foliage

When you think of fall, what comes to mind first? Halloween? Everything pumpkin spice? Cooler weather?

I am going to go out on a limb here and say most of us think of the famous fall foliage!

It begins with the chemical breakdown within the trees and leaves. According to the National Weather Service (NWS), there are four types of pigments that are responsible for giving leaves their different colors.

During the spring and summer months, the leaves act as a factory where most of the foods necessary for the tree’s growth are manufactured. This food-making process takes places in the leaf in numerous cells containing chlorophyll which is our first pigment and most common one, too: green.

The role of chlorophyll in photosynthesis is vital.

The green pigment is necessary for the leaves to covert carbon dioxide and water, using energy absorbed by sunlight, into oxygen and sugar. Some of this energy is used immediately while some is stored for later use.

Did you know chlorophyll doesn’t absorb green light even though we see the green on the leaves?

It actually absorbs most of the energy from the violet-blue and reddish-orange parts of the spectrum. It’s a green color to us because that is what is reflected back to our eyes.

In the fall, with the change in temperature and the days getting shorter, production of chlorophyll slows and eventually stops, allowing other colors to begin to show.

As the production slows, chemical processes in the tree will start to block off the connection between the tree and the leaves which is called the abscission layer. This layer is meant to protect the branch once the leaves fall off.

However, the abscission layer also cuts off the flow of nutrients and other chemicals that flow from the tree into the leaves, such as chlorophyll. Thus, the green colors begin to fade.

Other colors are often masked most of the year by the higher amounts of the green coloring. So as the production of chlorophyll slows in the fall, that is when yellow to orange colors shine through! 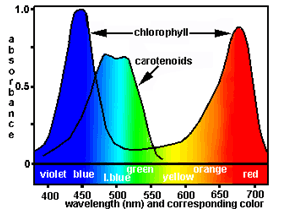 Remember, it’s not just chlorophyll that's exists during late spring and into summer, other pigments are present but usually aren’t seen until fall time.

Just like chlorophyll, this secondary pigment also plays a role in photosynthesis by capturing additional sunlight. They absorb blue light, but it’s reflected back to us as the yellow and orange.

This pigment remains in the leaf tissue a little longer than chlorophyll, contributing to the vibrant vegetation we see this time of year!

In autumn, as chlorophyll fades, the sugar becomes trapped in the leaf by the abscission layer, resulting in the formation of anthocyanin. According to the NWS, this chemical develops from the reactions with increased sugar concentration in the leaves.

Also it isn’t a guarantee in all trees!

The ugliest color is saved for last! Tannins are generally responsible for brown colors and only appear when the leaf is about dead.

They are sometimes referred to as ‘phytochemical,’ which is a non-nutritive plant chemical that has protective or disease preventive properties.

The NWS states that it’s a bitter waste product of the tree’s metabolism. When the leaf truly dies, the tannins seep out of the leaves, creating the brown color.

We can have colors go from green to brown very quickly if we have a quick round of freezing temperatures that kill the leaves before the chlorophyll or carotenoids are gone. 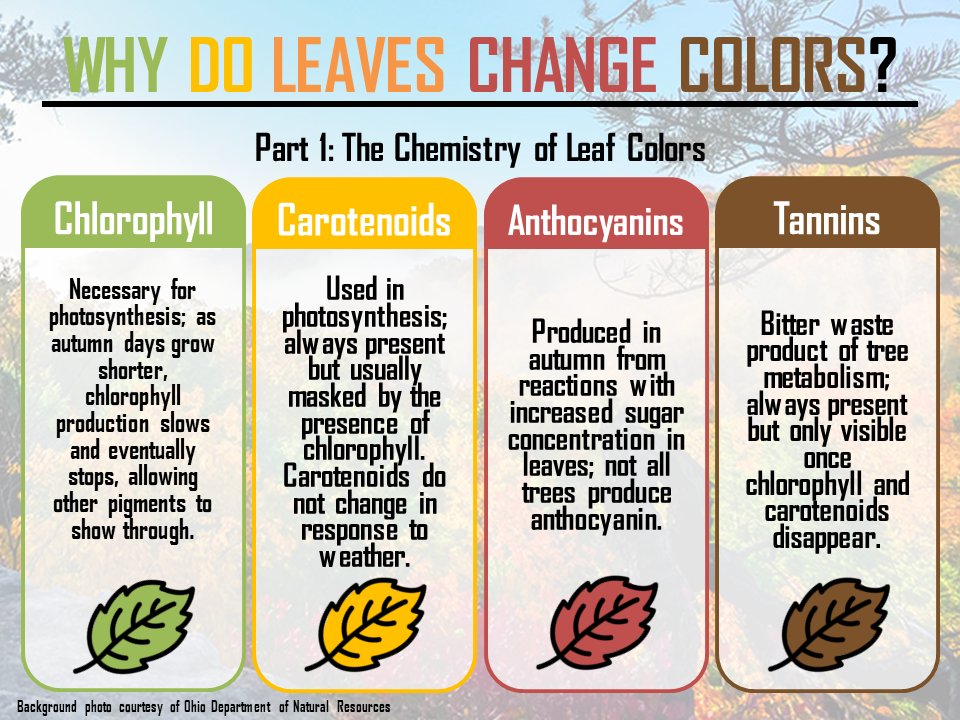 These four main pigments are responsible for a leaves color change, but it is also closely tied to weather conditions!

Ideal weather conditions would be a series of warm, sunny fall days with cool nights. You don’t want freezing overnights!

With these conditions, you could see brilliant red colors with the anthocyanin process. The NWS says that lots of sugars are produced in the leaf during the day, but cool temperatures print them from draining out at night.

On the other hand, rainy, windy, and cloudy fall days that obscure sunlight are not ideal. This would lead to less sunlight and lower sugar amounts, diminishing the intensity of the fall colors.

Early frost or freezes can impact the length of the fall foliage along with strong winds causing the leaves to drop earlier.

Plus, if there is a drought earlier in the year, such as late spring or summer, this can delay the color for the upcoming fall foliage.

Typically yellow and orange colors are expected each year and aren’t impacted as much by weather conditions as the red colors because of the amount of carotenoids in the leaves.