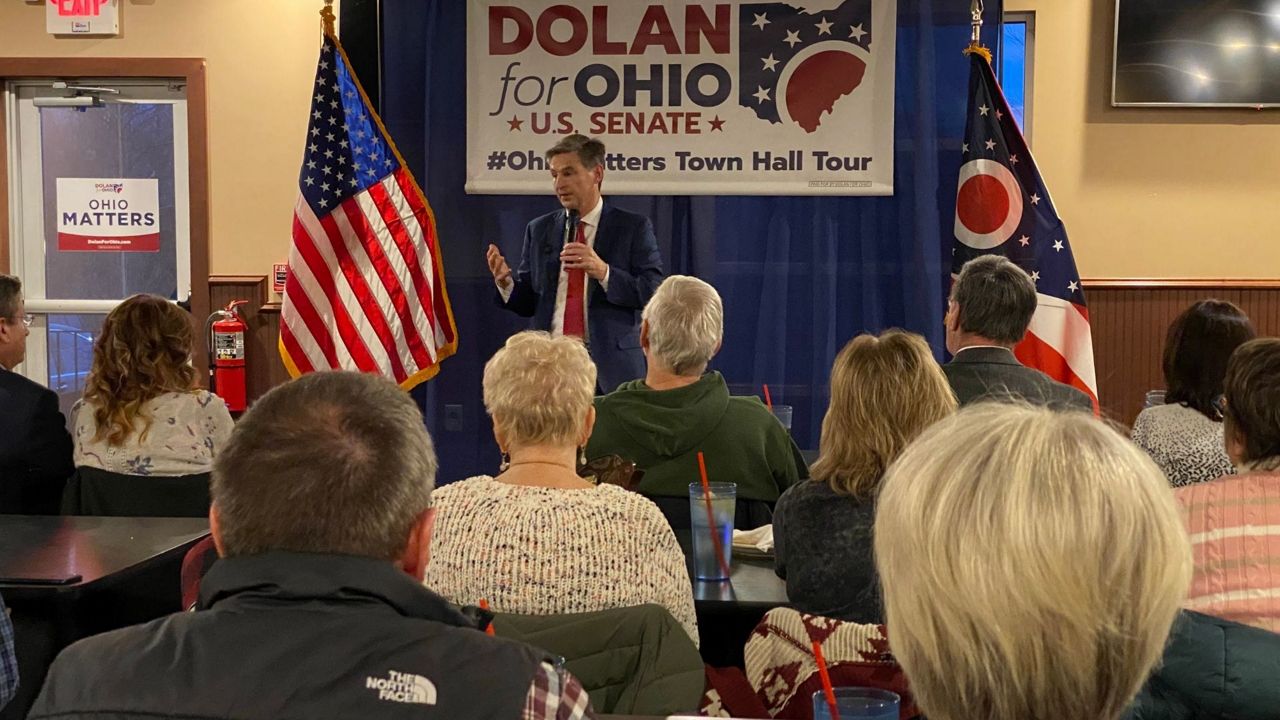 CENTERVILLE, Ohio — Over the course of five events on a recent campaign swing through southwest Ohio, Matt Dolan tried to make clear that his bid for U.S. Senate differs from the other Republicans running.

“I know exactly who and what I’m fighting for,” he added. “My opponents just want to cause fights.”

Dolan, a state senator from northeast Ohio, is hoping to be elected by focusing squarely on conservative policy.

“We all know that when Republicans are in charge, things are better,” he told a handful of voters at Cherry House Cafe in Beavercreek 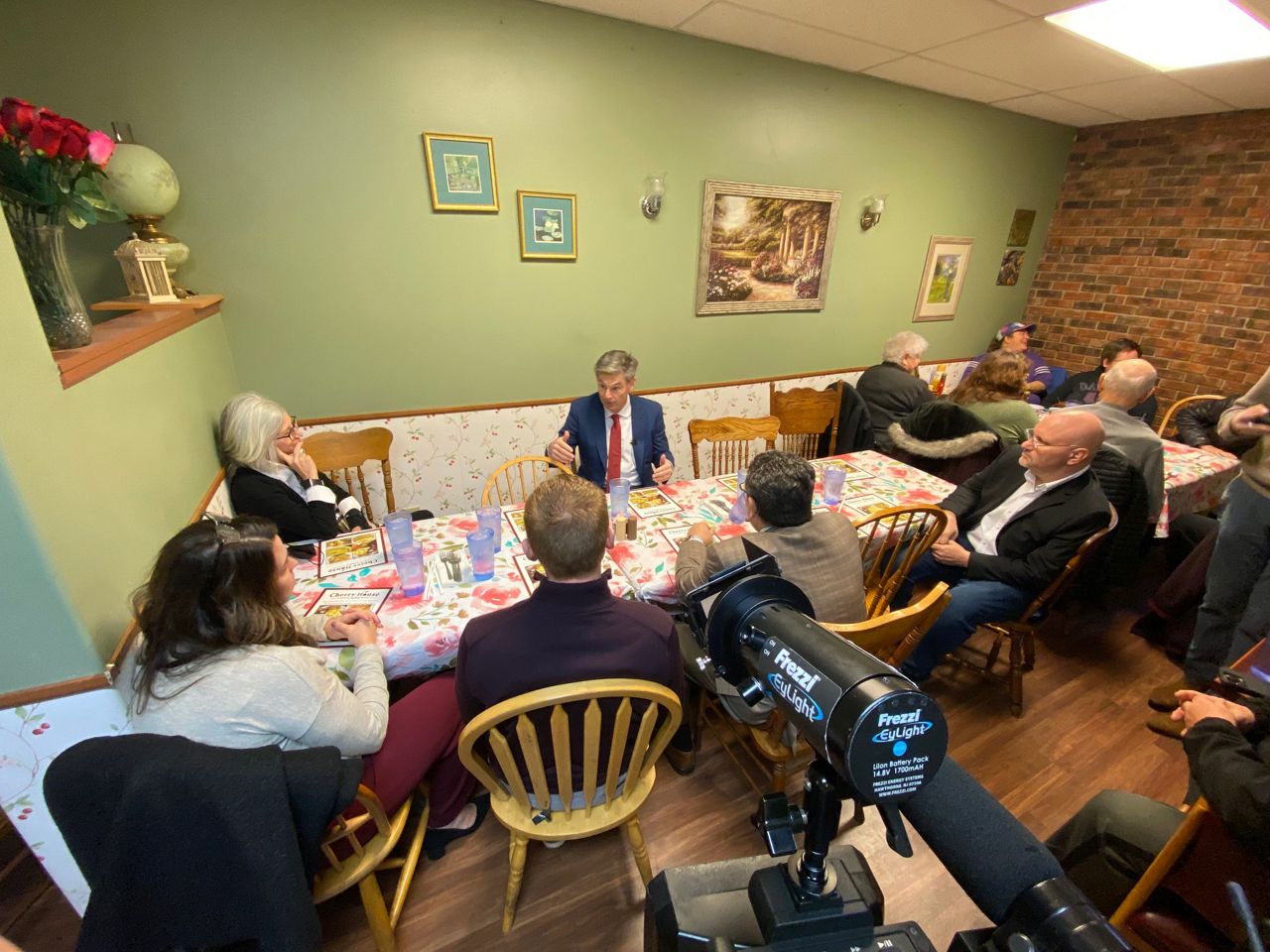 Over breakfast, at roundtables, and in town halls, Dolan talks about the economy and security.

He highlights his work as a state legislator, helping to pass three conservative budgets as chair of the finance committee, his background as a lawyer, and the lessons he’s learned from his billionaire family, with whom he owns the Cleveland Guardians baseball team.

It’s an attempt to differentiate himself from his four main Republican rivals, who are competing for former President Donald Trump’s endorsement and talk mostly about the issues Trump prioritizes.

Republican candidates across the country are clamoring for Trump’s support, since he remains the most popular figure in the party.

It’s why Dolan says he entered the race last September.

“They weren’t focused on the policy and where we need to be,” he said at Cherry House Cafe.

At a breakfast with business owners in Centerville, Dolan’s strategy seemed to be working. 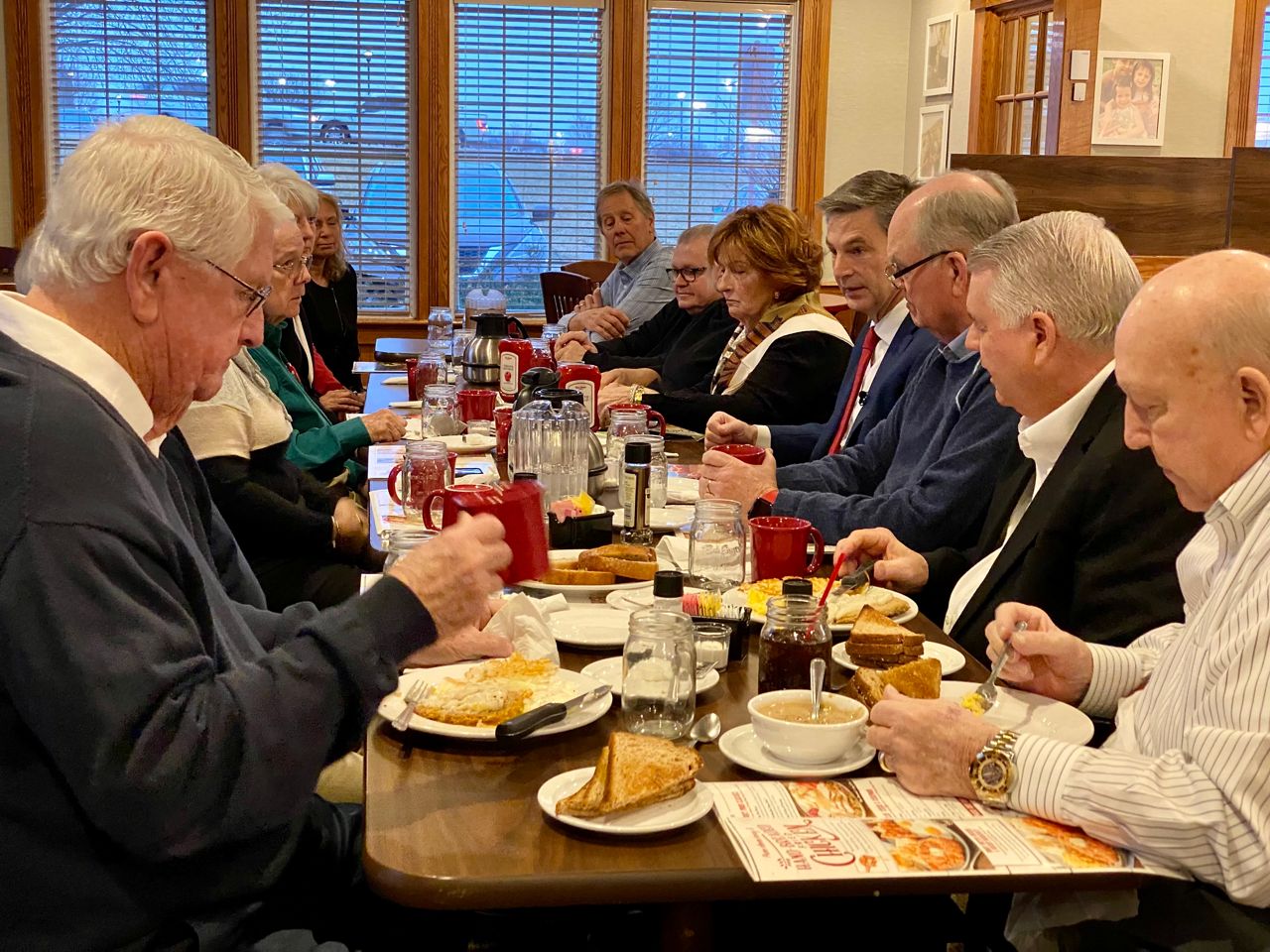 “He sure does know what he’s talking about. So I really like him and I’m going to support him, for sure. And I wasn’t before I came to this breakfast,” said Joy Brush, who owns a local drug and alcohol testing company.

JoAnne Rau, who serves on the Centerville City Council, said Dolan is carving out a unique lane for himself.

“I think there were a number of people that would’ve liked to have voted Republican and maybe didn’t in this last race,” she said. “And he might pull those people back in.”

Dolan is far from anti-Trump; he’s just not Trump-obsessed.

He voted for the former president twice and says he will support Trump again in 2024, if Trump is the GOP’s nominee. In an interview with Spectrum News after his stop in Beavercreek, Dolan explained it comes down to Trump’s policy platform.

In his stump speech, though, Dolan makes a point of distancing himself from Trump’s baseless claim that the 2020 election was stolen — a fiction that Dolan’s opponents have embraced and that Trump has turned into a litmus test for his backing.

At a town hall in the Dayton suburb of Huber Heights, Dolan compared Republican efforts to overturn the election to the Democrats’ push to enact sweeping voting rights legislation that he calls unconstitutional. 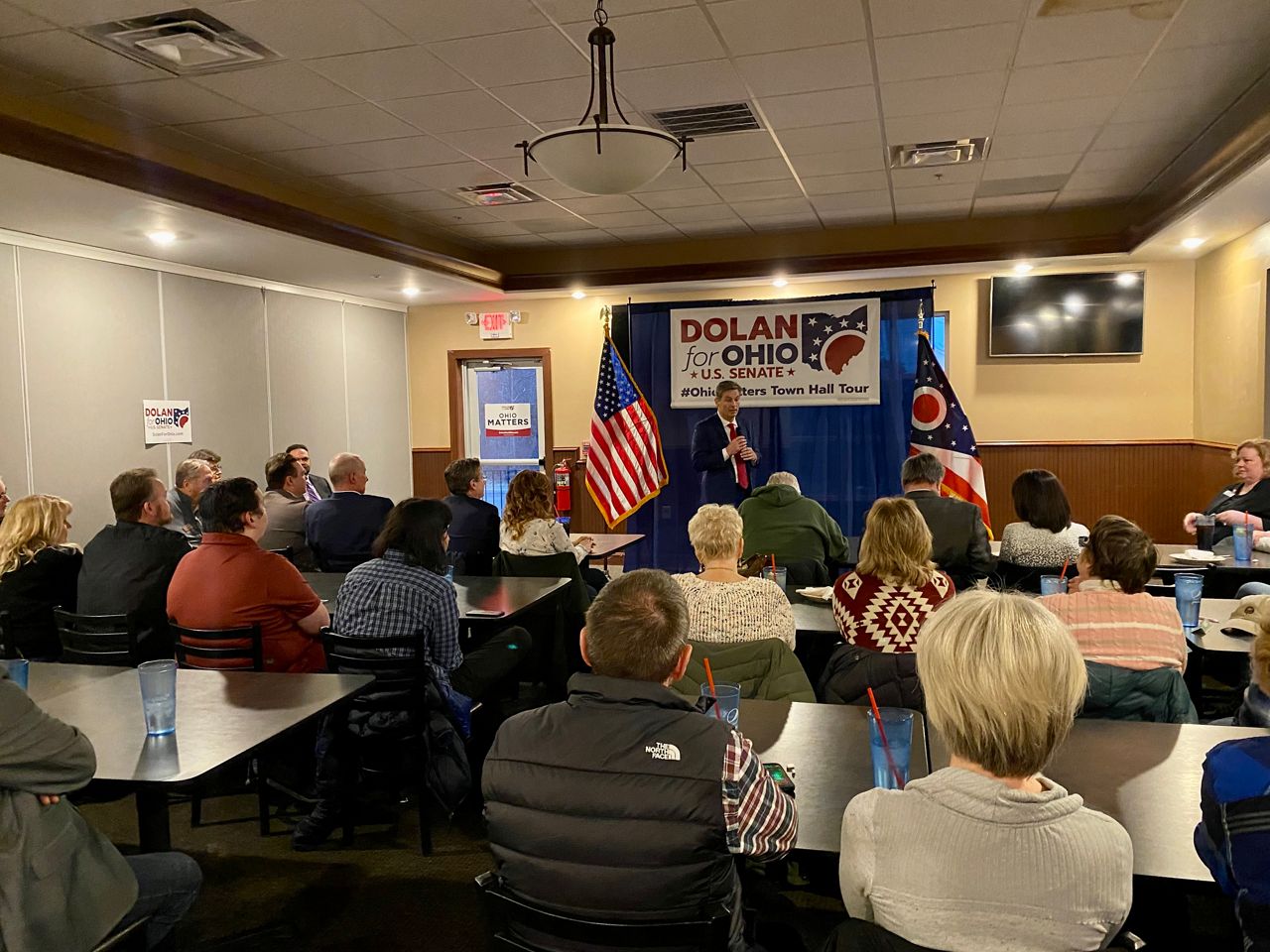 “If you decide that you’re going to go to Washington, as a federal person, and you’re going to decertify an election — which by the way, there’s no legal path to do that anymore anyway — you are basically federalizing the election,” Dolan said. “You are stomping on that same constitution.”

Some in the crowd of about 50 found it refreshing.

“Until Matt came along, I really wasn’t supporting any candidate because all of the other candidates all seem to be how much — and pardon the expression — how much can I kiss Trump’s butt so I can get elected?” said Bob Fudge, who lives in Cedarville.

Others are still deciding how to balance Trump’s input with their feelings in a state Trump won twice by eight points.

“It’s not going to determine 100%, but I would like to see him hopefully get Trump’s endorsement,” said Brian Latham, a resident of Springfield.

When Dolan launched his campaign, Trump released a statement that same day saying, “I know of at least one person in the race who I won’t be endorsing.” He called Dolan a “RINO,” or Republican-in-name-only.

Dolan doesn’t seem phased, though. He said he’s more in tune with voters than his opponents are.

To date, Dolan has spent at least $10.5 million of his own fortune on his campaign and his family has poured at least $3 million into a super PAC to support him. It’s allowing him to flood the airwaves with ads.

What does he say to voters who feel Dolan might be trying to buy the election?

“Well, I’m not,” Dolan said. “I mean, you need resources to win elections. Because I was doing my job as a state senator, I haven’t been in the race for over a year like my opponents have been, so I knew I wanted to be competitive.”

Dolan is regularly compared to retiring Sen. Rob Portman, who is seen as a mild-mannered dealmaker on Capitol Hill.

When asked about it, Dolan argues he’s more aggressive than Portman, who has endorsed one of Dolan’s Republican rivals, Jane Timken. But Dolan tells voters that if elected, he will go to Washington open to compromise.

“Anything that I say I want to get done, I got to get 60 votes. Which means I’ve got to find commonality with 50-some Republicans and a handful of Democrats to get things done,” he told the business owners over breakfast in Centerville.