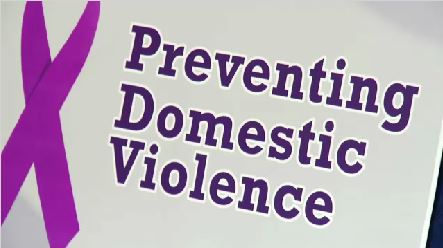 Paula Walters' initial abuse happened in 2006, but only now has the state of Ohio deemed the practice of strangulation a felony.

Prior to the recent passing of Senate Bill 288, Ohio was the only state in the country where strangling a person was not illegal.

"There was that moment when I thought, I'm going to die tonight," said Walters, founder of the nonprofit Standing Courageous.

Walters never thought her former boyfriend would ever strangle her.

"I remember him looking at me like that and saying, 'I don't know if I should kiss you or kill you'," Walters said."That was right before his hands went around my neck. And that's the last thing I really remember."

Walters said her being strangled landed her in the hospital more than once.

"That night I got a life sentence because of the hands around the neck and the blood circulation to the brain being diminished and basically almost cut off," Walters said. "I ended up with a traumatic brain injury​."

Walters said she received the help she needed and that she has filed three protection orders against her assailant in the past 10 years.

Her abuser was charged with domestic violence and assault in 2006.

"He got charged with those two because of the damage, because I couldn't eat food and stuff," Walters said. "Over the next week, they ended up getting rid of those charges and raising them to felonious assault, which is how, you know, up until very recently, until we got the strangulation law in Ohio,  that's how they've been having to charge that. Instead of going there, they ended up giving him this plea bargain and he had attempted aggravated menacing, which was a $500 fine and a year probation."

Walters said prior to Senate Bill 288 getting passed, her experience led her to create Standing Courageous, a nonprofit to help women who have struggled with domestic abuse.

"We all came together and kind of made this training and this awareness of there's much more to domestic violence than just physical abuse, it can cause long-lasting symptoms," Walters said.

"One in 10 survivors also said that they were strangled too many times to count," said Maria York, policy director of the Ohio Domestic Violence Network. "So this has been a history of a pattern of offenses. So we're hoping now the tools are in hands having this legislation passed and having strangulation recognized as a felony offense."

York said by making strangling a felony, it will not get rid of domestic abuse but can provide survivors time to think while their offender is behind bars.

"It would give the survivor time to make the decision, such as seek safe shelter, get their affairs in order, leave the unsafe environment," York said.

Walters said this bill just scratched the surface and that she hopes more education is offered to law enforcement about strangulation.

"We need to have the public educated, too, because they're the ones that are going to be sitting on the juries. So they have to understand this dynamic. I hope that opens up the component that more conversations are being held so that when women do have that placed around their neck, they are victims of strangulation they look in the mirror and say 'I'm OK', because that's not true," Walters said.