CINCINNATI — There’s a new design for the Cincinnati side of the Brent Spence Bridge Corridor that would create nearly 10 acres of usable land downtown and provide better connectivity to neighborhoods to the west of Interstate 75.

Changes to the plan include a series of refinements to the area between Third Street and Seventh Street. Much of the roughly 9.5 acres of land that the city plans to reclaim lies directly behind the park. 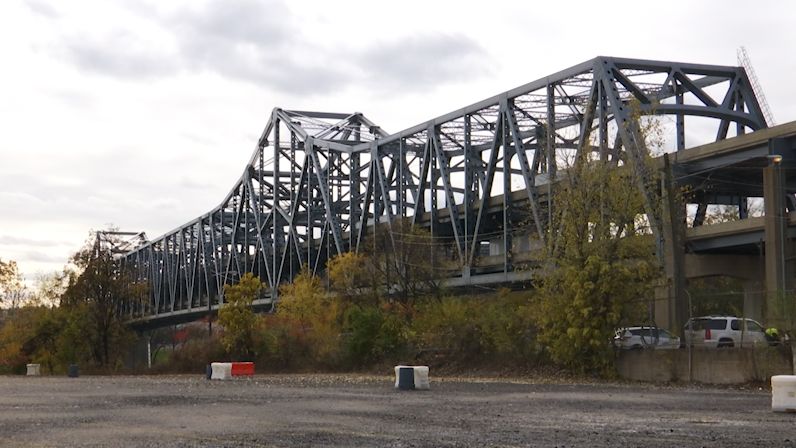 “Our ability to grow as a city and region, our ability to connect workers and residents and the places they need access to depends on us getting this project done and done right,” Pureval said.

The long-planned Brent Spence Bridge Corridor Project calls for the construction of a companion bridge alongside the existing nearly 60-year-old bridge, which connects Cincinnati and Covington, Ky.

The $2.77 billion project also includes infrastructure improvements along stretches on both sides of the Ohio River. That includes corridors of more than 1 mile in Ohio and 3 miles in Kentucky.

This summer, the City of Cincinnati and the Cincinnati USA Regional Chamber each submitted feedback and requested changes to the corridor on the Ohio side over the bridge, according to a technical report from HNTB Corporation, an infrastructure design firm based in Kansas City.

The firm met with staff from the Ohio Department of Transportation and the city staff to review the proposal. ODOT and the Kentucky Transportation Cabinet signed off on the project alterations.

The revised plan focuses on reclaiming land, both to enhance downtown green space and create new areas for future development, especially on John Street. Much of the area is space formerly filled by the now-demolished Dunnhumby building on West Third Street.

The new land would have an estimated value of $20 million, Pureval said, adding that the property has the potential to generate more than $500,000 a year in real estate taxes.

As of Thursday, there are no definite plans for the reclaimed area, Pureval said, but he envisions creating a place where people “can either work or enjoy retail and restaurants.” He also stressed that having nearly 10 acres of developable space directly west of the Duke Energy Convention Center creates “some really exciting opportunities for large-scale investments.”

“We want to be a city that’s growing, and these 10 acres right in the middle of our downtown is really going to pour gasoline on that effort,” Pureval added.

Brendon Cull, president of the Cincinnati Chamber, called this an incredible economic opportunity for the city and region.

Cull views the new infrastructure as helping to improve long-standing traffic issues on the Brent Spence Bridge, a crucial linchpin to the I-75 trade corridor between Michigan and Florida. But it also means investing in downtown Cincinnati. 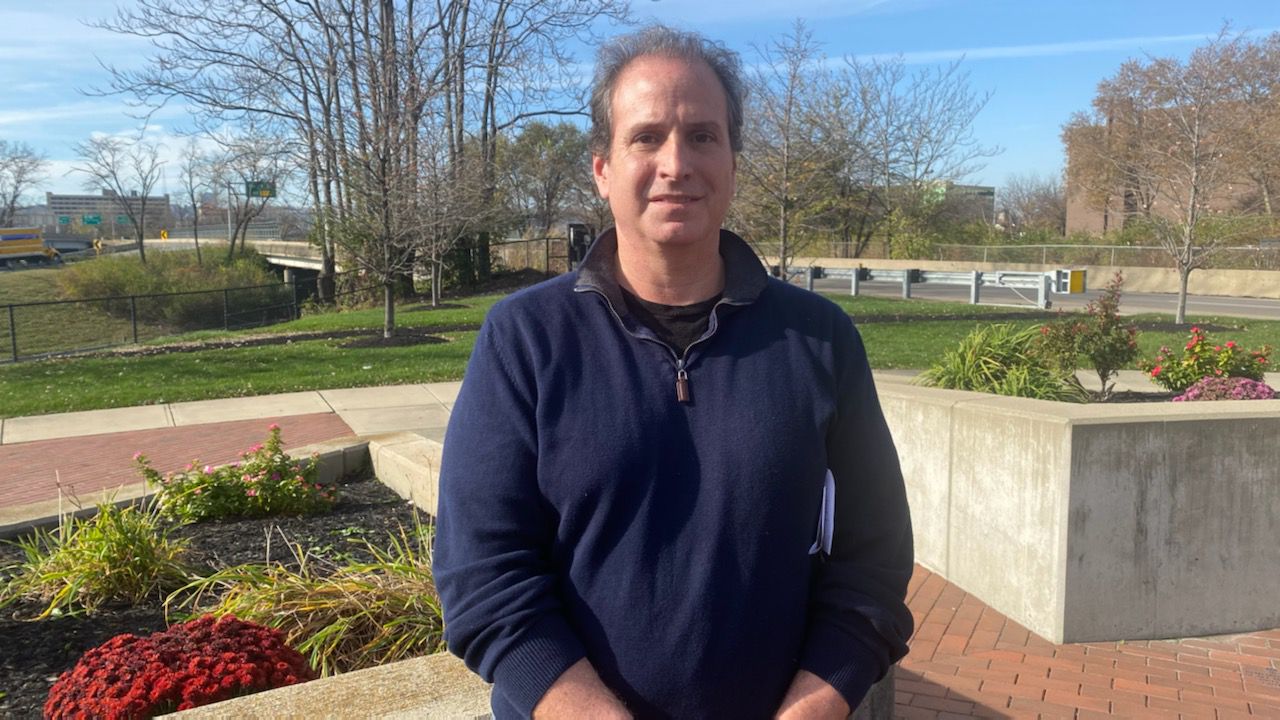 “Our goal all along has been to make sure that the Brent Spence Bridge gets done and gets done in a way that maximizes opportunity for our region,” he said. “This successful effort will create more economic opportunity for the people who live here and work here, and that’s what matters.”

The move to free up more downtown land as part of the Brent Spence Bridge Corridor Project is something Brian Boland has advocated for over the past few years. His grandfather owned a restaurant, the Columbia Cafe, on John Street years ago, Boland said. The area where it existed is currently used as an exit ramp.

Boland, the principal partner at the organization Bridge Forward, came up with a reclamation proposal of his own that he says would have freed up more than 30 acres in downtown.

While he’s happy to see the city made efforts to reclaim under-used areas, he hopes “the cake isn’t baked” and there'll be opportunities for the residents to provide feedback before the plan becomes final.

The city’s Department of Transportation and Engineering is going to work with residents on the plan, Pureval said. The Brent Spence Bridge Project Advisory Committee will also host public hearings next summer to give residents more of an opportunity to weigh in.

“I would like to see workshops where they invite community people to listen actively to comments and answer questions about the plan way before they’ve printed it on a poster,” Boland said.

While economic development is a key part of the plan, Pureval stressed that the motivation for the Brent Spence Bridge Corridor changes wasn’t “the bottom line alone.” 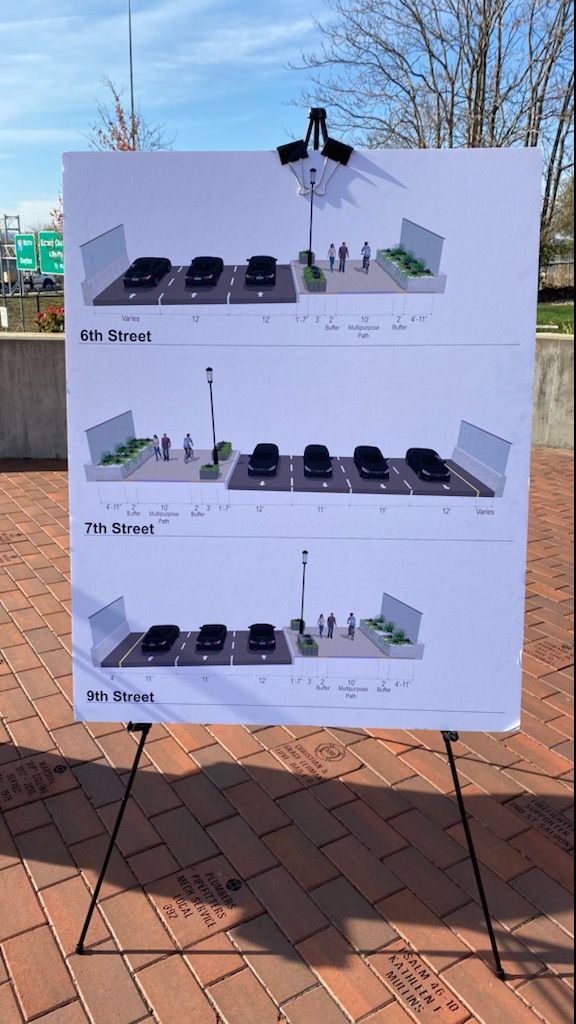 During his comments Thursday, the mayor mentioned the history of Interstate 71 and I-75 and how their construction “tore apart predominantly black neighborhoods.” But he feels the new design has the power to “right the wrongs of the infrastructure decisions of the last century" by "stitching these communities back together.”

Proposed improvements include refining entrance and exit ramps on Third, Fourth, Fifth and Sixth streets to better integrate them into the city’s street network. The plan also removes one exit ramp.

The new plan also places an emphasis on redesigning bridges crossing the interstate. Another goal is to create a “city feel” on or under interstate bridges, according to the HNTB report. The report doesn’t go into specifics, but it alludes to things such as the aesthetics of the bridges and improving green space in those areas.

The new plan also adds pedestrian and bike safety enhancements at 10 connections across I-75, including West Liberty Street and Harrison Avenue. The plan is to add a new shared-use path along Winchell Avenue between Ninth Street and Ezzard Charles Drive, including a pedestrian bridge connection to Freeman Avenue.

“We’re also doing everything within our power to reconnect the West End and Queensgate with the rest of our urban core,” Pureval said.

Tammy Campbell, deputy director of ODOT District 8, said the plan changes shouldn’t affect the cost of the project or the timeline. As of Thursday, the goal is to start work in November 2023, she said. The project will take five or six years to complete.

That time line will probably depend on the status of federal funding available for the project.

In May, Ohio Gov. Mike DeWine and Kentucky Gov. Andy Beshear applied for roughly $1.7 billion in federal grant funding through the Bipartisan Infrastructure Law. The governors said Kentucky and Ohio would split the cost to construct the bridge “50/50,” with each state handling the costs for projects on their side of the river.

Campbell expects to hear information about the status of the grant application this winter, but she noted that news about some project funding could come as early as this month.

“If we don’t get the funding, we’ll be having other conversations,” she said. “But right now we’re pretty optimistic.”

Changes to the Brent Spence Bridge Corridor Plan in Cincinnati

Plans also call for the reconfiguration of northbound I-75 exit to Fifth Street to create a new signalized intersection with the U.S. 50 ramp approximately 300 feet west of Central Avenue.

Other plan modifications include:

Additional details about the project are available on the Brent Spence Bridge Corridor Project website.