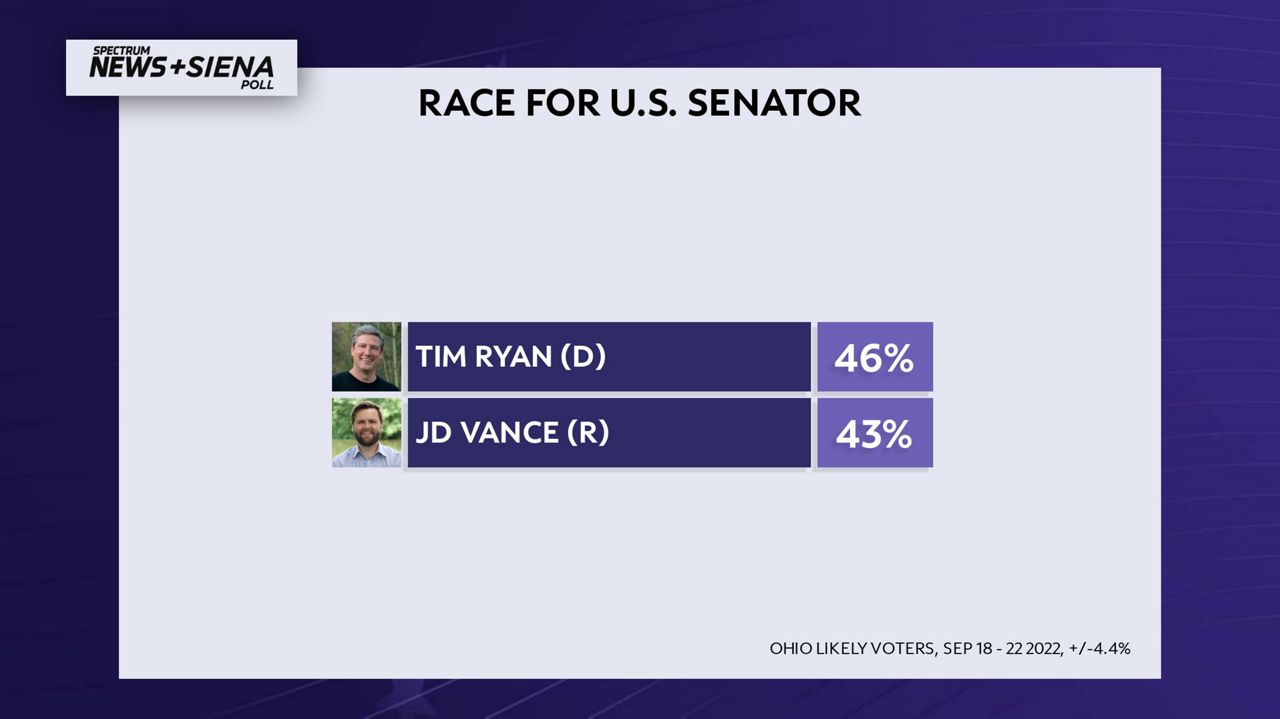 The poll was conducted Sept. 18-22 and 642 likely Ohio voters participated.

“This has certainly become a real Senate race over the course of the summer,” said Kyle Kondik, an Ohio native who now tracks elections for the University of Virginia and Sabato’s Crystal Ball.

He said many political observers never thought the open Senate race would be so close, given that Donald Trump won Ohio twice by eight points and Republican Gov. Mike DeWine seems on track to win reelection against Democrat Nan Whaley.

Since winning the Democratic primary in May, Ryan has spent millions of dollars running nine TV ads that bill him as a moderate Democrat.

“Patriotism means supporting the American worker, which is why I voted with Trump on trade,” Ryan says in a new ad released Tuesday.

Vance has been trying to catch up, releasing his third ad of the general election last week. In it, he accuses Ryan of voting with Democrats but playing a moderate on TV.

“I’m JD Vance, and I approve this message because TV Tim is fake, but D.C. Tim is bad for Ohio,” Vance says in the spot.

The Spectrum News/Siena Poll shows Ryan leading Vance in two crucial voting blocks that will help decide this race: Support from independents (47% to 35%) and women voters (54% to 34%).

Mike Ahern, an independent voter in Columbus who volunteers with the Franklin County Board of Elections and has supported candidates in both parties in the past, said Vance and the GOP are becoming too radical, so he’s leaning toward backing Ryan.

“He seems like he comes from a blue collar town and has not forgotten those roots; versus JD Vance, it seems to me he’s kind of lost his way a bit,” Ahern told Spectrum News.

The new poll also shows a majority of Democrats (95%) and Republicans (87%) plan to support the candidate in their party. Ryan earns slightly more crossover support from Republicans (8%) than Vance does from Democrats (1%).

Professor Cherie Strachan, director of the Bliss Institute at The University of Akron, said Ryan will need as much crossover support as he can get in order to maintain an edge over Vance, since Ohio has been trending more Republican in recent years.

“It is important for Tim Ryan to leverage every bit of that likeability and trustworthiness that he can,” Strachan told Spectrum News.