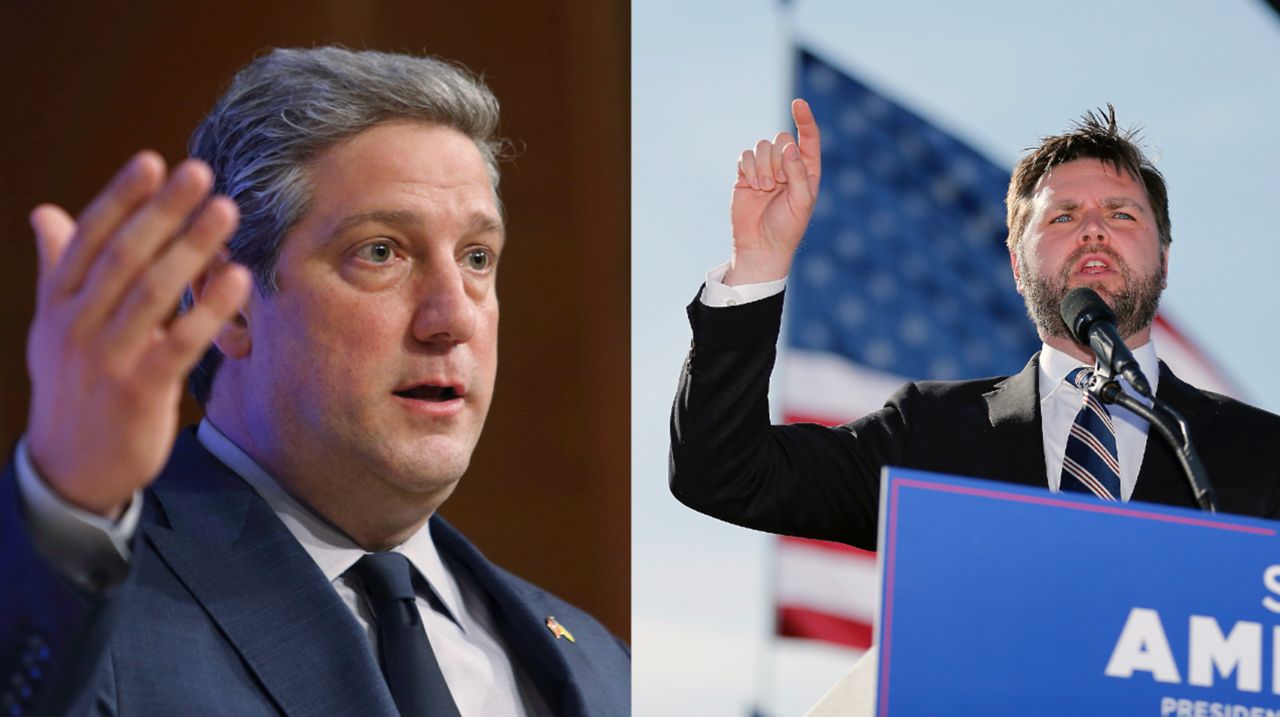 
An independent poll by Emerson College shows Republican author and investor JD Vance at 45% and Democratic Congressman Tim Ryan at 42%—a statistical dead heat with 10% of voters still undecided.

On Thursday, a political group aligned with the Senate’s top Republican, Sen. Mitch McConnell, announced it will spend heavily on radio and TV ads to boost Vance.

Given that former President Donald Trump won Ohio twice by eight points, Republicans had expected to win this open Senate seat fairly easily. But Ryan and Vance have taken very different approaches to campaigning this summer, resulting in the race heating up.

For his part, Ryan has been blanketing the airwaves since winning the Democratic nomination May 3.

He’s released eight TV ads and spent nearly $8 million broadcasting them across the state to try to cast himself as a moderate Democrat.

“So when Obama’s trade deal threatened jobs here, I voted against it. And I voted with Trump on trade,” Ryan said in an ad released in June.

In July, his campaign put out an ad featuring Fox News clips that mention Ryan.

“He wants for Ohio what Ohio gave him: a fighting chance,” Vance’s wife, Usha, said in the TV spot.

Some conservative radio hosts and GOP activists have criticized Vance for his approach to the summer, saying he’s allowed Ryan to get a head start.

Ron Verb, a radio host with NewsRadio 570 WKBN in Ryan’s hometown of Youngstown, has mentioned it multiple times on his program.

“l’ll vote for JD Vance because I will never vote for Tim Ryan, but JD Vance is doing a terrible job at this point in time,” Verb said June 8.

The next month, July 26, he voiced his criticism directly to Vance when he called in.

“My audience, them and me are concerned with what’s going on with your campaign,” Verb said.

Ryan has outspent Vance eight-to-one on TV ads this summer, out-fundraised him four-to-one last quarter, and seemingly has been out-working Vance on the campaign trail.

Ryan’s campaign said that from primary night on May 3 through Aug. 12, he held 46 events that press had access to.

A Spectrum News analysis of Vance’s social media accounts found evidence of 26 events in the same period. His campaign did not respond to requests for information.

University of Dayton political scientist Dan Birdsong said Ryan has used the summer to his advantage after easily winning his primary, while Vance seemed to slow down after his come-from-behind win in the crowded and expensive GOP race.

“He could have used that as kind of a jumping off point to really build momentum, build some fundraising, and kind of gather some momentum. And it seems like that didn’t happen for them,” Birdsong told Spectrum News.

Democrat Morgan Harper, a progressive who ran to the left of Ryan in the primary, applauded his summer strategy, including Ryan’s efforts to reach out to moderate white voters.

But Harper cautioned Ryan not to forget the Democratic base.

“We need to make sure, though, that we aren’t just targeting one demographic,” Harper told Spectrum News. “That we see and do what is necessary to drive record turnout among Black voters, young people, Asian Americans, Latinos, women in this moment, to have a shot at really winning this thing.”

“Celebrity, big endorsements, just go up on TV. You might win, I don’t know. But you’re probably not going to be as good of a public servant as Ohio demands of us if you’re not out there engaging with everyday people,” Dolan told Spectrum News.

On Thursday afternoon, a political action committee with close ties to Senate Republican Leader Mitch McConnell, announced it will spend $28 million on TV and radio ads between Labor Day and Election Day to help Vance win.

Out of eight states with competitive races that the Senate Leadership Fund is investing in, Ohio is receiving the third most money.