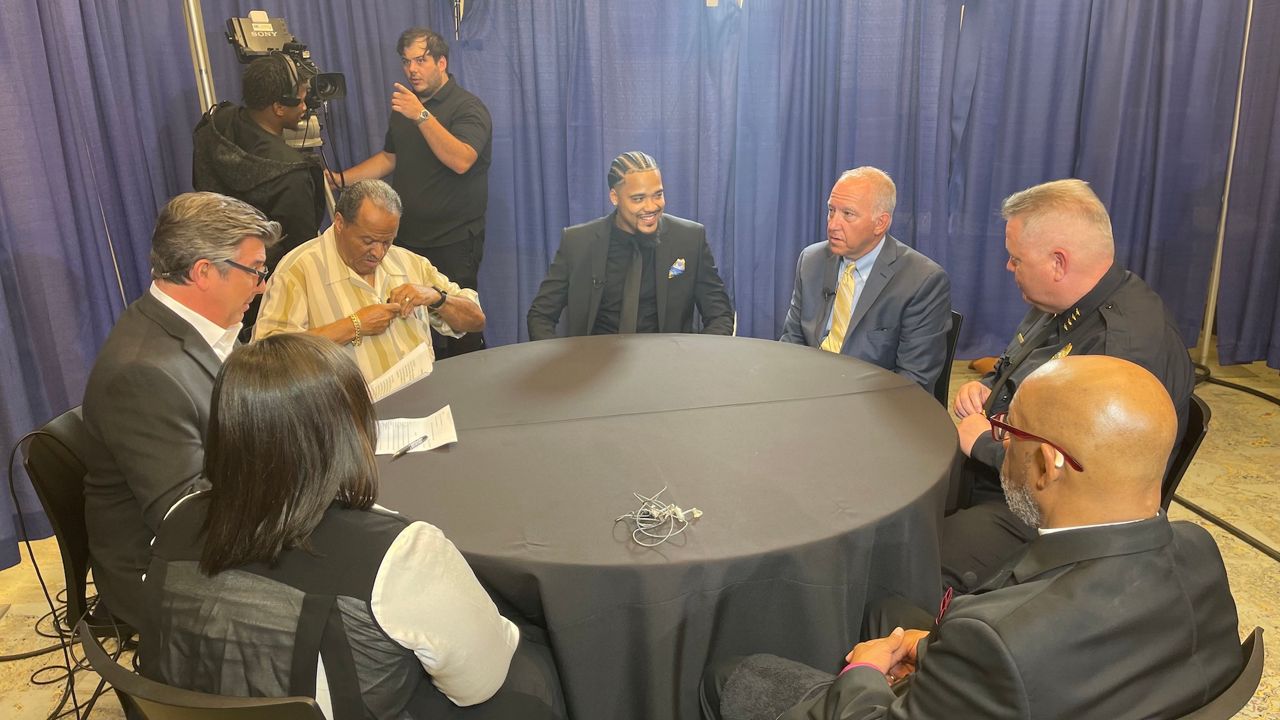 One Akron: Uniting the City We Love: A talk with Akron leaders in the wake of the Jayland Walker shooting

AKRON, Ohio — Can justice be married with love? That question was contemplated during a recent Spectrum News 1 Ohio-hosted roundtable, following the police killing of Jayland Walker in June.

The shooting inflamed police-community relations more than any event in Akron’s recent history. Rallies, marches and episodes of violence have underscored the shooting in which Walker was hit by more than 40 bullets fired by eight officers.

The group examined the influences stressing police-community relations and looked at why immediate observations run to police brutality. They discussed how perceptions might be changed to bring the community back together.

The notion of faith married with love was introduced by Johnson, chair of Akron’s Racial Equity and Social Justice Task Force, which the city created in 2021 after the killing of George Floyd in Minneapolis. The task force worked to identify racial inequities and propose solutions to eliminate them.

He pointed to the weight of the city’s collective grief as a factor in how difficult changing the perception of police brutality will be for Akron.

Horrigan said he had pondered the bishop’s words and understood that concept could be realized in the ways police interact with the community, from public safety to parks and recreation.

A step in that direction is creating more diversity on the police force and implementing more of the recommendations of the RESJ task force, Horrigan said.

Earlier this year, the task force issued a five-year plan, recommending greater transparency in the city’s approach to policing, including the need for a citizen oversight board for the police department.

Margo Sommerville noted that prior to the Walker shooting, City Council had changed the city’s charter to improve police-community relations by boosting transparency. Last year, council approved police body-cams for all officers and legislated timely release of the body-cam footage.

“You know that we want to hold our police officers accountable,” she said.

Marco Sommerville pointed out that the city released all 13 versions of body-cam footage within seven days of the Walker shooting, although the charter requires the release of only three.

“Because we see in so many cases across the country, people wait years to see body-worn footage, but we didn't do that here in Akron, Ohio,” he said.

Sommerville said the city reviews police complaints but tempers that with the understanding people make mistakes. The city wants the department to learn from mistakes to improve.

He acknowledged the danger officers face, especially with Ohioans now carrying concealed weapons with no need for formal training.

“I can't imagine how a police officer feels walking up to a car late at night, not knowing exactly what he's going to come up against and making sure he makes the right decision for himself and for the person that he’s stopping,” he said. “That has to be a lot of pressure and a lot of stress on these officers.”

Kallmeyer brought up empathy toward police and asked Morgan to expound on it.

“Empathy is one thing and justice is another,” Morgan said. “You know, we still have to hold people accountable for their actions regardless of the case, but still be empathetic for people as being humans in doing a tough job.”

People don’t often see the person behind the uniform, Mylett said. Officers rarely are recognized for the work they do behind the scenes.

“But the immediate rush and judgment of guilt because you're a police officer…  that is one thing that really causes a whole lot of consternation and anxiety for the officer and their families and our community,” he said.

“The best tool that an officer has on their tool belt is discretion,” he said.

Horrigan said the system can cause cyclical problems. When someone is unable to pay a fine, loses a driver’s license or has a felony on their record, they could lose an opportunity to land a job.

“We need to find it our capacity to forgive,” he said, calling the system “wholly inequitable.”

Marco Sommerville agreed and said better education and forgiveness is the way to stop that cycle.

“And we have to be more willing to give people a chance to get back in the game,” he said.

Kallmeyer pointed out that in policing in Akron, use-of-force incidents have been on the decline and asked the police chief to elaborate.

Defining use-of-force as anything from hands-on contact to discharge of a weapon, Mylett said the Akron department averaged less than 1% in use-of-force incidents per 150,000 interactions in 2020 and 2021. Akron’s ratio of complaints to incidents is also low, averaging 50 complaints per 180,000 contacts.

“If there's a bridge that needs to be built between the police and the community, we need to do the hardest part of the work, but we can't do all of it,” he said.

Boosting diversity in the police department will help because it can enable people to see themselves on the force, Margo Sommerville said.

One way the city has been working to build diversity is by exposing Akron students to public safety careers, Horrigan said.

In a recruitment campaign earlier this year, the city saw an increase in the number of non-white applicants, Mylett said.

The panel agreed an important factor in good relationships relies on white officers knowing how to interact with people of color.

“Just knowing how to approach people and how to talk to them and you know how to gain their respect,” said Marco Sommerville. “If you have a diverse force, you'll get that type of interaction with the community.”

Lack of cultural competency is a big program, Johnson said. Some white people feel threatened by Black people so they can’t communicate effectively.

“The average white person, about a 75% on average of white folks, has no meaningful relationship with an African American,” he said. “None.”

And when people are uncomfortable, they often are afraid, he said.

“So that means it's very difficult for me to understand what's going on because I don't have that input,” Johnson said.

Mylett agreed and said while working in the Pacific Northwest, his department worked to strengthen the relationship with the Muslim community.

“So how do you do it? You do it just like this, where you reach out and you shake hands and you build that relationship and it worked there,” he said. “It can work here.”

“It takes a long time to build trust,” Johnson said. “That's very difficult to do. But you can destroy it in an instance and then you have to start all over again — if that person allows you to do so.”

It’s likely people will always find a way to discriminate against others, he said.

“We can’t give up,” he said. “We must continue to make Akron the best possible place we can make it for the most possible people.”

Kallmeyer asked Morgan whether he fears for his children’s futures.

Morgan said He is heartbroken he will have to have “the talk” with his infant son one day about “things that he has to be mindful of being a young Black boy in America,” Morgan said.

“I'm also very optimistic that, you know, we can see an evolution in our system,” he said.

As to whether the community will learn to trust police again, trust is retrievable, Morgan said once grief has subsided.

“This is a traumatic experience,” he said. “So that's going to take time.”

One Akron: Uniting the City We Love will air on Spectrum News 1 Sunday at 8 p.m. and again Tuesday at 7 p.m.