CLEVELAND — Officials from the Cleveland Clinic and University Hospitals said resources are strained as COVID-19 cases rise in the Cleveland area.

“Our emergency departments are overcrowded,” University Hospitals Chief Scientific Officer Dr. Daniel Simon said. “Our caregivers are working overtime and exhausted. We have more COVID positive patients than ever before. Currently, there are 394 hospitalized COVID patients in our system. Nineteen percent are in the intensive care unit.”

Simon said the number of tests coming back positive, nearly 30 percent, is the highest rate during the pandemic.

On its first day being open, officials announced at noon that the testing center would not accept anyone not already in line. The site was expected to remain open through 5 p.m. Officials said the site would reopen at 9 a.m. Wednesday.

The site caused so much congestion that Cleveland RTA reported slowdowns along a number of routes.

According to Ohio Department of Health statistics, Cuyahoga County has seen a dramatic surge in COVID-19 cases in the last few weeks. More than 3,000 cases were recorded on Dec. 16 for the first time during the pandemic within the county, according to ODH figures. 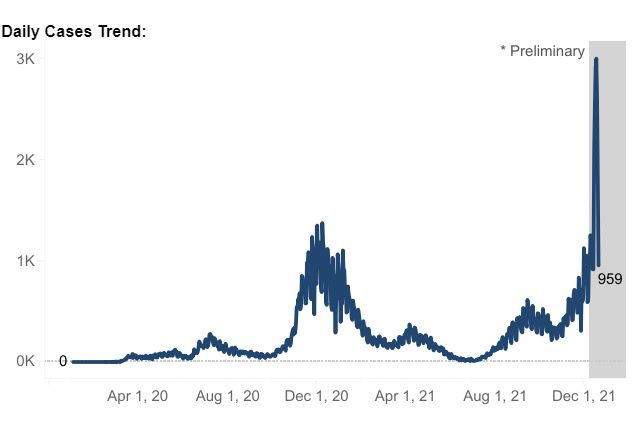 The New York Times, which tracks county-level data, shows that Cuyahoga County had the third-highest per capita COVID-19 case rate with an average of 2,456 daily cases per 100,000 residents. The county also has the fourth-highest overall number of cases, only behind New York City, Cook County, Illinois and Los Angeles, California, which are much more populous areas.