CINCINNATI —  Greatness isn’t measured in what you do. It’s all about how you go about doing it.

That’s the message the Cincinnati USA Regional Chamber sent Monday with the reveal of the 2022 class of Great Living Cincinnatians. It’s an honor bestowed upon captains of industry and civil servants who’ve made lasting and significant contributions to the region and their respective fields.

“The 2022 Class of Great Living Cincinnatians are an esteemed group of four individuals who have served their community selflessly and sincerely,” said Leigh R. Fox, board chair of the Cincinnati USA Regional Chamber. “Their invaluable contributions to their respective fields of social work, culinary arts, medicine and civic service exemplify what it means to be a Great Living Cincinnatian.”

Since 1967, the Great Living Cincinnatian Award has been presented annually by the Cincinnati Chamber. These newest honorees will join 163 previous Cincinnatians chosen by the Chamber’s Senior Council.

Recipients are recognized for service to the community; business and civic attainment on a local, state, national or international level; leadership; awareness of the needs of others; and distinctive accomplishments that have brought favorable attention to their community, institution or organization. 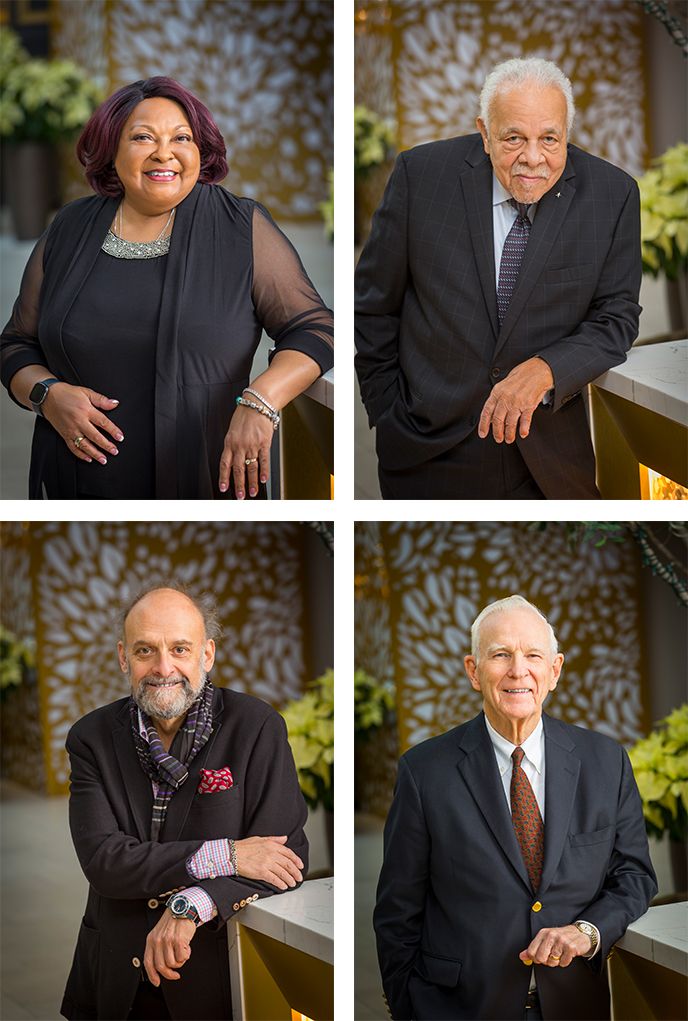 Howe mentioned to the Chamber that he returned to Cincinnati in 1970 with a dream of running a business and “taking control” of his destiny. He turned that dream into a reality by purchasing U.S. Precision Lens, a small optics company.

By 1986, Precision Lens had grown into one of the largest manufacturers of video plastic/glass hybrid optics for projection television systems. Staff had grown from a handful to more than 600.

Howe sold the company but remained there in various capacities until he retired in 1997. After retirement he stayed active, serving on various boards and advisory committees, including at his alma mater, Miami University.

His practice was in the heart of Walnut Hills, a neighborhood that has faced social and economic struggles over the years. Dillard made it his goal to never turn away someone in need.

“In medicine, I’ve always advocated that healthcare should be a right, not a privilege,” Dillard told the Chamber. “I just felt that the poor and disadvantaged need quality healthcare and unfortunately, to those without the means, it’s rationed. Money talks and buys the best healthcare.”

It’s the sense of community in Cincinnati that drew in and grabbed hold of de Cavel and Jones Baker. Both were transplants who fell in love with the city and the people.

“People adopted me very quickly and I think when people adopt you, you feel comfortable. It was easier in Cincinnati to become more myself than it was in New York City,” said de Cavel, who left New York City in 1993 to make his local mark at the famed Maisonette. The French-born chef has since gone on to work in kitchens and own restaurants across the Queen City.

Like the other the award recipients, de Cavel made the decision to go out on his own and carve his own path. But he is quick to give credit to those who worked with him and supported him. Those friendships mattered most when de Cavel endured multiple personal tragedies.

“I did the same thing (professionally) I would have done anywhere else, which is not try to make the city better, but being proud of what Cincinnati is,” he said.

Jones Baker spent four decades helping to run organizations, including most recently the Urban League of Greater Southwestern Ohio. She served as president and CEO for 15 years before retiring in 2019.

Born in Paducah, Ky., Baker credits her mother with giving her “nudge” early in life. She credits the people of Cincinnati for supporting her along that journey.

“I am not a native, and the city has embraced me. I am now a Cincinnatian,” she said.

The recipients of the 2022 Great Living Cincinnatians awards will receive special recognition Thursday, 24 at the Cincinnati Chamber Annual Dinner at the Duke Energy Convention Center.